The Defiant, in her secret lair.

Another double-length drive through Nebraska got me to the Medicine Bow National Forest in Wyoming, at sunset. To boondock there, you go past the entrance for the Vedauwoo Recreational Area, which is a very nice paved campground and picnic area, with walking paths right up to some of the finest climbing cliffs I’ve ever seen. The day use area costs $5/day, and camping (without any hookups) is $10/night. I’m not dead sure any of the spaces will fit the Defiant, but there is some accommodation for larger rigs.

After a tour down several miles of the worst washboard gravel road I’ve seen to date, I managed to find a spot to turn around, and wound up pulling into the same area I stayed at last year, but in a position that would limit exposure to mud if the weather turned bad, as had been forecast. It was dark by that time, and quite late, so the evening celebrations were curtailed a bit. 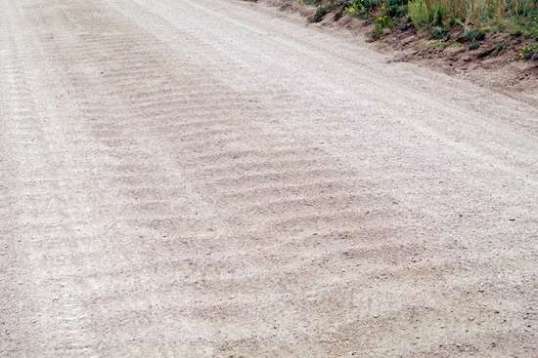 This is hardpack, and with a stiffly-suspended vehicle, it’s time to rock and roll. A normal car/truck can skate over this at 30 MPH or so, but the result of doing that with the F-250 and trailer is not so good, at least at tire pressures that will handle the weight. A few miles of this at 1/2 MPH makes the paved fee campsite pretty appealing.

Breaking out the solar panels the next morning on a whim, I hoped to stay 3 nights before moving on – a choice that requires solar power unless I want to live Spartan. I popped the Evelo Aurora off its rack after that, enabling me to take a first look at the Vedauwoo campground and facilities. The paved road felt pretty posh after the washboard to get back to the entrance, and some of the many long, steep hills inside would have forced a walk if I were still on the Raleigh. The Evelo’s motor made it easy, and I kept an eye on the watt meter during ascents to get an idea of the power penalty from trying to muscle it for speed versus simply churning uphill in a lower gear at a slower pace. The Aurora handled it all well, even when having to get rolling from a dead stop halfway up a steep hill. The throttle control makes it easy to start it rolling, when the first half-turn of dead pedaling would be an ordeal. I had cheated a bit and had a slightly smaller front sprocket installed, but I’ll get into that in my Aurora Mods post later.

Before you even get to the Vedauwoo entrance, there’s plenty to capture the imagination. There are cattle roaming free in this area, but not many. 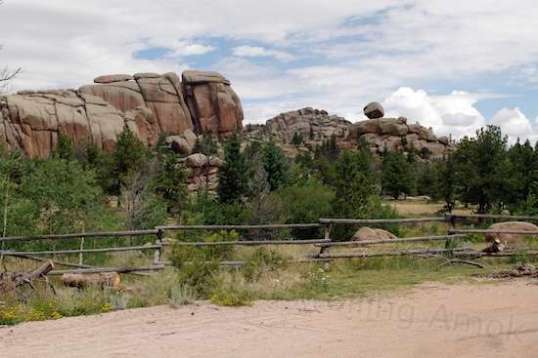 There’s a place to park near the start of the washboard road, to take a hike or climb.

In Vedauwoo, a pavilion with picnic tables allows a scenic refreshment, rain or shine.

In the fee campsite, this the view from one of the sites. Nice, eh?

There’s actually a little network of roads leading to more areas and tent sites, and it’s all located within features like this.

I noticed the guy in the yellow shirt and helmet standing on a ledge talking, and then a few minutes later, noticed the second person (dead center in the photo) climbing on up at a goodly pace. I saw no rope – only the long crack in the rock. I never thought I’d need my telephoto on a quick little bike tour!

Standing at the front of the trailer, this was the view.

When I first pulled into the area at sunset, the small rabbits and chipmunks were plentiful. Maybe the road keeps the predators away. The morning after I set camp, I noticed mouse (or chipmunk) droppings in one little place, but thought it was sesame seeds from some bread I’d had. I’ve always been able to stay in one infested spot for at least three days before the visits started. The next night proved those assumptions incorrect. The hull had been breached on day one, and it was too late to deploy defensive measures on day two. In addition, my campsite was tucked close behind a hill and Internet connectivity was a serious issue, even with a booster. Rather than stand and fight a losing battle, I checked weather forecasts and decided to break camp after the second night to head for Green River, Wyoming and the Wild Horse Canyon Road. I would stay there two nights and then cut for the Bonneville Salt Flats after seeing how the weather was doing there.