The early Faber home where Eberhard grew up.

Eberhard rounding the bend at an old horse racing track. This car belonged to a friend, and the two raced with it until the engine blew up, with no money to fix it.

Oops! A newspaper clipping of Eberhard’s first serious crash at the Antetum Speedway. He suffered only minor injuries in the borrowed car (at the bottom) after a tire blew out and caused his car to spin. 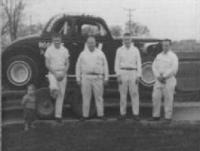 This is the Faber-Castell team just a few years after it formed. Eberhard is at left with Lou Castell and two friends, Fred Klamer and Phil “Stumpy” Willis. Little Eberhard Jr. is in the foreground.

Two years before the photo above, friend Stumpy Willis goes over the wall with a little assist from Eberhard, who claimed he was pushed from behind. Stumpy and Eberhard missed the next heat while working on the car, but Stumpy did go on to claim 5th place in the main. Stumpy liked the car because “it’s easy to push”.

This time it’s Eberhard in trouble as his #47 Ford noses up over another car. Fred Klamer is running to assist. Run Fred, run!

Ever the prankster, Fred Klamer sneaks up to wave the green flag early and then runs from officials as Eberhard in #77 instinctively hits the gas and noses into the car ahead. “I knew he’d do that,” said Klamer later. Klamer was fined $22.

Little Eberhard Jr. experiments with control layout at the shop.

Fireball wringing out the Ford at a local track. Lou Castell was particularly proud of this car, which was highly successful at races and became a crowd favorite.

At an exhibition race years later, Eberhard’s “Fireball” nickname almost turns to “Wrong-Way” as he becomes disoriented from an exhaust leak and exits the pit going in the wrong direction.

The Faber-Castell shop in the early 70’s, just after the unfortunate losses of both Fireball and Lou Castell. The team continued operations as Team Shoestring.

Eberhard Jr. carries on in front of a packed house at Darlington, finishing in the top 15.

At Sears Point, Eberhard Jr. holds second place for 20 laps before a broken tie rod sends him across the low hills surrounding the track.

Here are the spotters at Sears Point. “Sparks” Corrigan in the foreground (wearing white cap) is the Team Shoestring spotter, here having radio trouble which started on lap two and was never resolved.

In a moment of deja-vu, Team Shoestring team members form a human blockade to stop Eberhard Jr. at Charlotte. He had spun out in turn three and got disoriented, driving the track in the wrong direction. Three crewmembers were slightly injured.

Ever innovating, the Team Shoestring crew briefly experimented with throwing the next gas can out to the car to replace the first. This inspiration was improvised by a crew member behind the wall, who unfortunately had no chance to tell anyone he was about to try it. The fire was extinguished in about five minutes with only minor injuries. 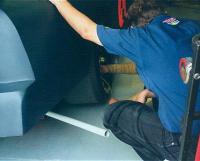 Not all times were great. After a string of seven last-place finishes, a disappointed crew member pauses to weep quietly in the shop.

Team Shoestring Crew Chief Nigel Teabag trying to psyche out a young Jeff Gordon by pointing out possible flaws and equipment failures that sometimes happen despite the most meticulous preparations. This unfortunately backfired, since he chose to try this during an engine change in his own pit, later earning Eberhard Jr. a DNF just five laps into the race.

Eberhard Jr. is lapped by #24 Jeff Gordon at Sears Point during lap five, just seconds before Eberhard’s engine seized from lack of coolant.

Eberhard Jr. flying high (far right) at Daytona, later managing to finish 5th after inadvertently causing a massive pileup two-thirds of the way into the race. The huge crash left only eight cars still on the track. “Well, that’s just one of them racing deals,” said the great race car driver and sportsman.