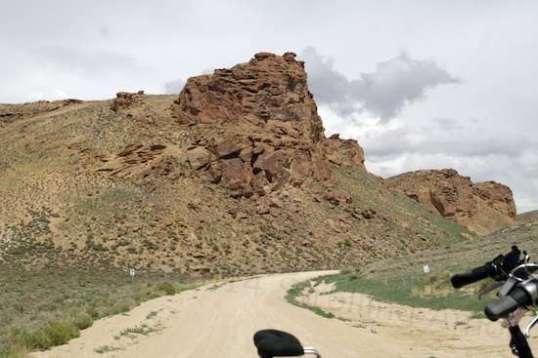 The long climb up from Green River, Wyoming tends to get one’s heart and spirit a’thumping.

I had partially forgotten the sensation of driving up Wild Horse Canyon Road’s 1,300′ climb above Green River, Wyoming’s 6,100′ elevation. That’s enough to drop temperatures several degrees, and enough to make life very comfortable for heat-generating persons such as myself. The main climb is gravel over dirt, and four thoughts kept churning in my mind during the ascent. The first was that Wild Horse Canyon Road is almost exhilarating to drive up, since the views presented during the unrelenting climb are impressive. The second thought was of course wondering if I’d once again see any wild horses. Were the two I saw last year a fluke? Third, the road itself prompts a mental note to take the descent seriously when I leave. The Ford’s brake module failure has decreased the amount of braking that the trailer alone can contribute. That alone is unlikely to pose a problem, but a wet descent could. Fourth, the slow climb, rough in many places, was such a crawl as to prevent locking up the torque converter. “I hope it’s okay with this long a period of stress”, I thought to myself. The trans temp itself stayed unmoved from normal. You don’t need to know anything about torque converters to appreciate this concern, because all you need to know is that they are expensive to be replaced. Near the top, it occurred to me to put ‘er in 4WD Low, to ease the strain, and that worked out great. Fortunately, the first two thoughts dominated the others, and near the top of the initial climb, I was rewarded with the distant sight of a small herd of horses grazing upon a hilltop. 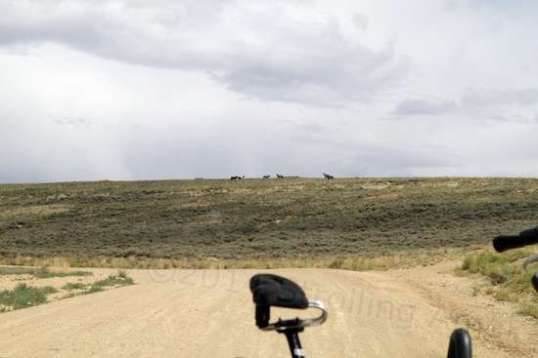 I guess they don’t call it Wild Horse Canyon Road for nothin’! 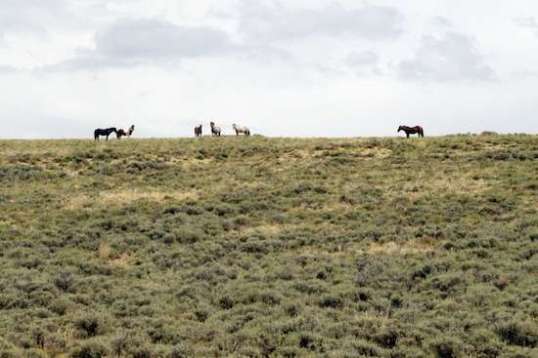 Once again, I’m caught with my telephoto down! Each horse had a different level of concern about my approach, but I was so far away that all stayed put.

Thus rewarded, I pressed on. One campsite commentator promised, “Numerous boondock pullouts along the entire 30-mile stretch”, so I decided to go past the closest single campsite that I stayed at last year, and see what was available. With the road being so long and in decent shape, I also decided against breaking out the Aurora e-bike. I’d just find a new site and plant the rig in one shot. A few miles in, I found one pull-off with two large placards overlooking the valley below, and some distance in, another. 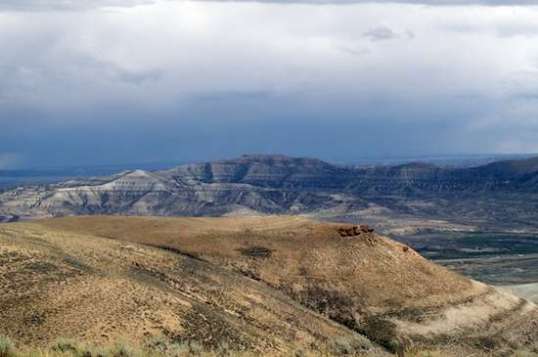 The view from one of the placarded pull-offs.

These were sizable pull-offs, but surely not meant for setting up camp, so onward I went for perhaps 15 miles. This took considerable time, and after awhile the gravel ran out onto plain dirt, which showed indications that a prolific rain would pose some challenges in getting back. Some spans looked as though a 10,000-pound 4WD tow vehicle pulling a 7,000-pound trailer might have quite a struggle at the bottoms of the rolling hills. And all I was seeing the entire distance was cell tower service roads, without a single campsite in sight. The big sky view was now presenting an approaching thunderstorm, and I was now in a place I wouldn’t want to be when it hit, so I made it as far as a turnoff for Pilot Bluff, did a clumsy three-point turn in 4WD because of the dip and loose surfaces, and high-tailed it back as the rain started. 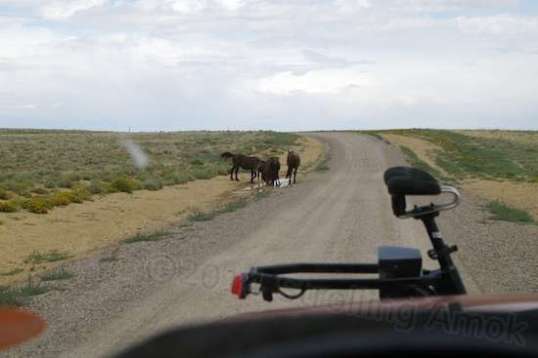 This group was drinking from one of the many roadside ditches, and were in no hurry to move as I idled up to them. 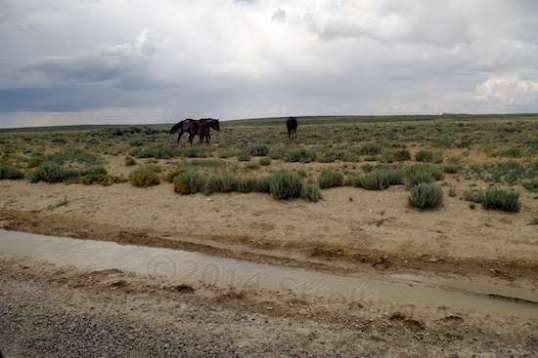 Only three of the four moved, and a have a shot of them and the reluctant one that stayed but it’s out of focus. My bad, not the camera’s.

I wound up back at one of the placarded turnoffs, stopped and checked levels in the mild downpour, and shut down. As there were no signs prohibiting camping here, I decided to let someone else let me know if there was a problem. After the brief rain passed, out came the solar panels. I’ve always viewed deploying and then stowing them to be a huge imposition, but I’ve more recently moved toward the view that, like bicycling, they are a great way to stay in shape. Upper body strength and all, you know, something I don’t actually have but prefer to think of as maintaining. I also found a much easier way to align the panel’s hanging hooks with the trailer-mounted loops, so the ordeal of trying to do it blind is over. This is good, because I found that I don’t breathe normally when hefting a 45-pound panel over my head. So the periods of having to pause to get my breath back are much shorter, and setting up a fully-functioning camp is no longer all that time-consuming. 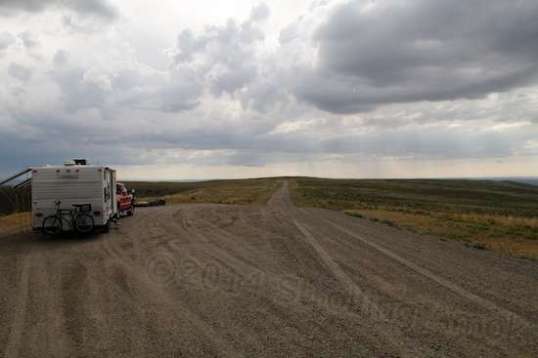 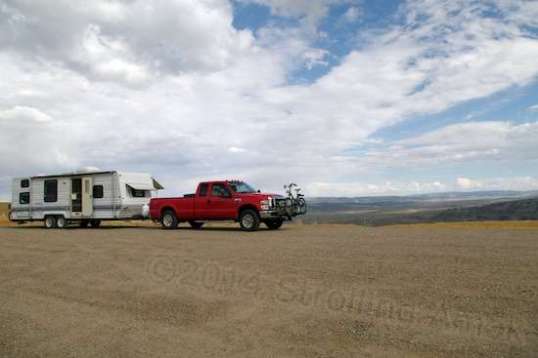 The clouds come and go rapidly. A storm coming in at my back allowed me this shot just before more rain started falling. 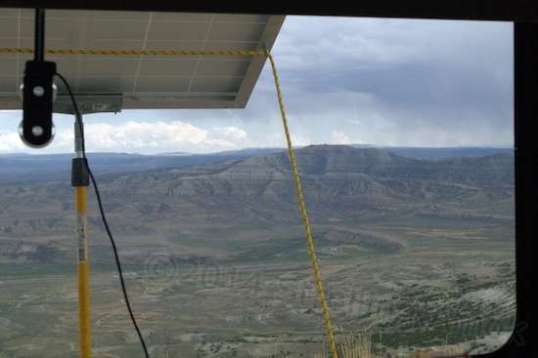 The view out my office window, and it’s even nicer in full sun. 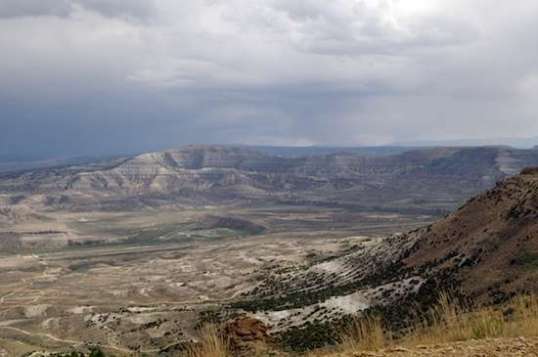 The same view standing outside the trailer. See why I like living in a movable house?

And, this pull-out made for a good spot. The closest ground cover was more than 10′ away, but I set up two ultrasonic vermin repellers inside the trailer just in case. So, life was good. It was good until I was in bed for a few minutes and heard some little varmint chirping and jumping to get a foothold on the retracted rear stabilizer immediately underneath my bunkbed and storage bay. Oh no! What is the deal here? Of course you realize, this means war! A good sleep this night would be mine, or else. I plugged in a third ultrasonic unit, up in the forward office that tends to be their entry area. This unit normally goes under the trailer, with its own little power inverter hooked to the house batteries, but the threat of more rain prevented this. Waterproofing it in a permanent installation is one of those things there hasn’t been time or place to do. Four – count ’em, four – baited snap traps and one capture trap were deployed along walls at proven strategic points. Since they were known to be outside, I also broke out the Tin Cat for the first time, a mass-capture box that I baited and placed outside the trailer. There would be no hull breach here, I vowed, and if there were, there would be no survivors. After that, I heard nothing specific, and fell asleep. A little rain later, and a commendable wind that made me get up just long enough to check for any high wind weather warnings. Nope. I went back to sleep, and got, in all, a rather sound rest. No evidence of a hull breach this morning, so I have some optimism that either something is helping – including the wind – or I’m just lucky. At any rate, now the clear sky, long road, and e-bike are calling me to take advantage before another thunderstorm rolls in this afternoon. 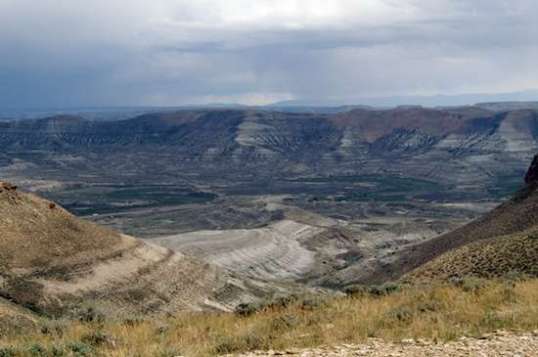 What can I say that this doesn’t?

Lastly, I have to add that the drive across Wyoming is something to behold. I decided that it was the most picturesque of anywhere I’ve driven through, but then again, I tend to think that same thought everywhere I go out here.