Valley of the Gods 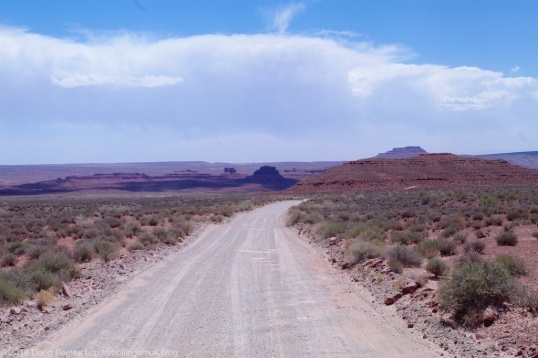 Due to a misunderstanding with my GPS, I entered the west end and saw this. Okay, but not that exciting.

[This post contains 22 small photos. The larger versions are available when you choose to click on them.}

My plan had been to enter the east end of Valley of the Gods, Utah, a gravel road that spans two highways. This was because there were cautions online about having to charge through sand in order to begin the trek at the east end, and I wanted to see just how intimidating it was, given my sporadic difficulties with thick dust at Monument Valley. It was supposed to give the willies to larger and heavier towed rig owners. Instead, my GPS, set for the “fastest route” to get to the east entrance, felt that beginning at the west end would be the quickest way to get there, and I, not realizing the subterfuge, blindly obeyed. The west end is a short jaunt from Goosenecks State Park, so I feel that my GPS was either deluded about the nature of that roadway versus the highway, or perhaps didn’t even care. We’re working through this issue together now. Its conversational ability is somewhat limited, but then, I”m not in a position to point fingers.

I can’t claim that the west half is no great shakes, mainly because of aggressive washboard. Too many vehicles going too fast. Five miles in to what is purported to be a seventeen-mile drive, I finally gave up and aired down the tires. What a tremendous difference! Visually, the west end has little going for it. By the halfway point though, things started picking up a lot, as is evident in the photos. Washboard aside, the great majority of the road itself could hardly be any easier if it were paved. Mind you, there are steep dives and climbs at numerous dry washes, and one of them poses some basic clearance issues due to a climb down off solid rock onto dirt. That turns back many of the small cars here to sightsee, which approach it as a sudden jump up. But the dives and climbs pose issues mainly for big rigs, who dare not venture more than a few miles from the east entrance. Drive anything higher off the ground than a sedan with a lot of low overhang, and you’re golden. Tire grip is excellent throughout. Just don’t tackle it in the rain. Besides the natural danger of active washes, many of the inclines to get out may well pose traction issues when wet. Lacking any other camping rigs to gauge how far in motorhomes and large trailers can reach, I’ll guess that the east entrance is the only one to use, that you can probably make it a few miles in, and that you’ll know when it’s time to turn back.

Look out! WATER HAZARD!! After some intense site study and planning, I made it all the way across! High five!  🙂

Basically, Valley of the Gods is more than a poor man’s Monument Valley. It’s every bit its equal, if not its better. Most of the places to pull off and camp are beside the road, but a goodly number offer more distance. Over a dozen vehicles passed me going the other way, so I was surprised to see not one vehicle encamped along the entire length at 1 PM. Maybe it’s the weather forecast, which is calling for brutal heat. I was more interested in planning the shortest reasonable route to an Interstate that would eventually serve as the last, hurried charge toward Illinois. A little fine tuning of the planning process would normally be in order, but I believe that, once again, prolonged heat waves are skewing normal averages upward. Maybe. Simply touring this road to see the incredible sights merely requires turning on the air conditioning.

Once you approach the halfway point, it’s interesting.

I finally got to the east entrance to survey the “dive down into deep sand”, only to find a trickle of water dampening bare rock. The bones of a deceased cow graced the entrance to a side trail nearby. Must have been a stray from somewhere else, poor thing. That’s no way to go. There was some deep dust on that side trail, similar to what is at Monument Valley, but none of it seemed to be making the effort to drift down into the wash. So I turned around and doubled back to pick from all the campsites I had seen.

The east entrance is graced by a trickle of water going across bare rock, with well-packed dirt on either side.

I ultimately chose a turn-off offering some privacy on the windward side of the road, perhaps a mere mile from the entrance. On a rise overlooking a canyon, I nosed the Mighty Furd into a wind that is accelerated by the rise. I view the stout wind as an asset, not a drawback. That’s because the Grandby’s fabric wall sections can gain a lot of heat in direct sun, and the way to not exceed whatever that day’s high temperature is, is to hope for wind and open up most of the windows, if not all. Air circulation is your friend in these things. Plus, I had noticed from my first photo stops that gnats are an issue here throughout, and that they are not such a nuisance in strong winds. Win/win.

With a forecast low of about 70 degrees overnight, I set up camp and packed away the two army blankets that had served me so well at higher elevations. I also set out the two ground panels to aid the batteries, since not every day will be full sun, and in hot weather the belabored fridge is capable of trashing my roof panels’ efforts at producing a proper recharge. Too much amp draw to reach the needed charge voltage. On a good sun day, the ground panels fix that potential issue, though their output is crimped by the heat buildup. Their frames get “coffee mug hot”, and you can watch the effect on holding voltage by early afternoon. Heat is the enemy of solar panel output. One oddity is that the recent battery swap seemed to once again affect the thermostat and also cause long, battery-draining runtimes. During the last couple of days however, it has slowly been self-righting such that the thermostat can be set at its normal position, and the box is simply contending against the heat of the day. This is good, since it means the fridge will no longer be running both all day and well into the night in one unrelenting go.

The view out the “kitchen” window.

As for cellular signal, I’m getting 2 of 5 bars on the modem and 2 of 4 on the phone. The Verizon modem, as it is wont to do in parts of New Mexico and Colorado, thinks I’m now outside of the USA and won’t give me a signal. Perhaps it and the GPS have been talking. The iPhone will connect, though those two bars result in Internet speeds ranging between glacial and none. It took several tries just to get these photos up, and testing with YouTube reveals interruptions even at the lowest resolutions. Functionality varies with the time of day. No booster is being used here. Maybe your equipment will fare better. But one thing to note here is that this site’s cellular limitation was my choice. Checks at some of the higher sites 6-8 miles in produced signal readings of 4 bars of 4!

The view out the passenger-side window.

So heat, gnats and a poor signal make this a mediocre long-term place to camp right now, but then again, every time I look out the “kitchen” window, wow. If I were here in May, it would probably be a lot more comfortable. There’s no point in rushing off to the next stop or the one after that – the temperatures won’t be any different. So I’m buckling in and enjoying the free scenery. There’s plenty of it, that’s for sure! 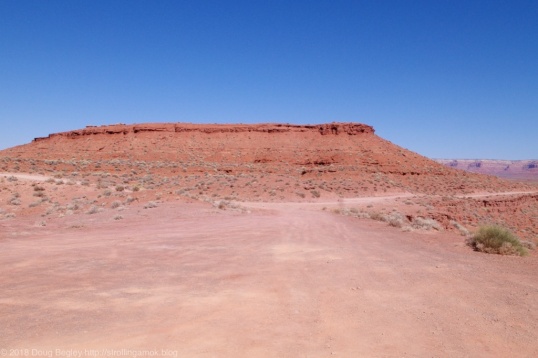 I can see my “driveway” leading to the road through the back door. 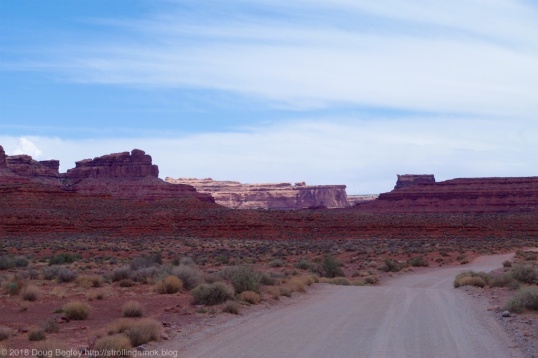 Further back along the road, the view begins to look promising.

As you can see, there’s no shortage of these along the road. 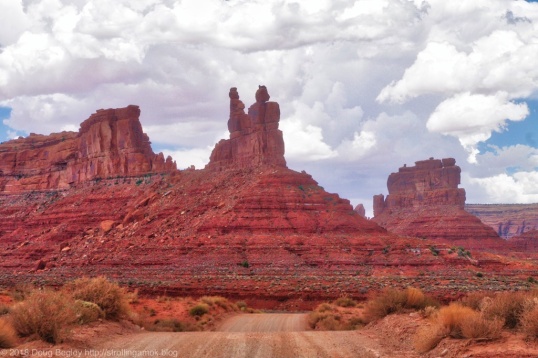 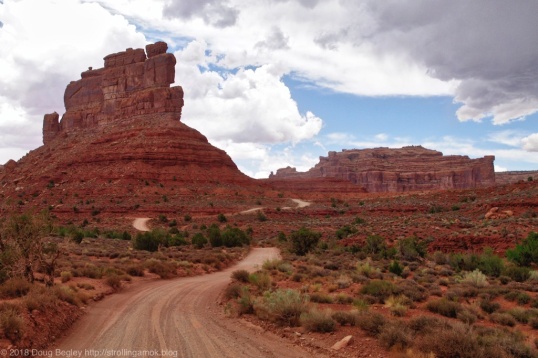 I stopped and looked back to see this.