And a Third Surprise 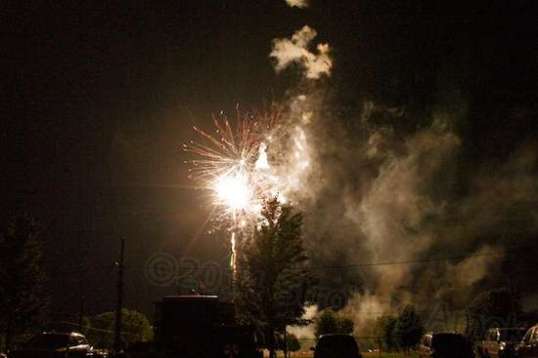 Not the best part of the show, but it does reveal the surrounding vehicles.

Returning back to camp at the Sandwich Fairgrounds showed many big trash barrels peppered throughout the camping area, which made me wonder. Then long before sunset, while I was watching a movie after dinner, a few cars and trucks rolled in and parked in the camping field. A little face eventually appeared close outside my screen door – some little guy fascinated by the side view of the glowing TV screen inside the unlit trailer, looked like. Then his momma called him back. More vehicles came, until the big field was decently full. By that time, I’d cleverly discerned that, incredibly, more fireworks were on tap.

Not unexpectedly, many folks in the field brought their own fireworks big and small, so the pre-show entertainment was constant. One family across from my site lit off firecrackers and such on the gravel path that my pickup was parked near, so I had to occasionally hope that the Mighty Furd wouldn’t accidentally become involved. Diesel fuel wasn’t a concern, but the $400 vinyl bed cover was. Momma was the main instigator, with a lot of small kids watching in a surrounding circle, but the lack of unplanned incidents over time eased my overly paranoid concerns.

At sunset, the head grounds guy showed up and said he’d have to temporarily shut power off, to kill the big sodium lights that illuminate the field. That would help people enjoy the official fireworks display tonight. Holy mackerel. I did an orderly, precision shutdown of the Big Mac and the movie player gizmo, and he clicked off power. Naturally, I plugged the TV into the house pack and resumed my movie until the fireworks display started with a flourish. My lawn chair was already outside. It was one of the best-done displays I’ve seen, with no long pauses to “build drama” (and save money). This town is nuts for fireworks!

7 thoughts on “And a Third Surprise”