The Intrepid, coughing up some of its contents.

Yesterday was a big day, what with casting the Defiant to the whims of Yuma’s oppressive summer heat and voyaging on in the Mighty Intrepid toward Prescott, Arizona. The purpose of the trip wasn’t to camp, but to have Adventure Trailer, my Four Wheel dealer, replace the gimpy water pump and reset the Grandby in the truck’s bed. Wellton to Prescott is a four-hour drive, and a prior errand jumped that to five. Amazingly, I arrived fifteen minutes ahead of schedule, arriving at 12:45 PM. The lads started right in and finished the job before I could finish filling my gut with a blend of pulled BBQ pork and macaroni with cheese at an emporium located just one block away.

I then consulted with Martin, one of the co-owners of AT, about what would be needed in order to move the camper back so that a thin spacer could be inserted up front to make the camper rest about a quarter-inch farther back than it presently was. See, my super-duper ground panel storage rack was just thick enough to contact the Furd’s cab under duress, removing some red paint. Ordinarily, this would be a slam-dunk: undo the camper’s bed hold-downs, attach four jacks at the corners, lift it up a bit, drive the truck forward enough to insert said spacers, and reverse the process. For an empty camper it’s even simpler: release the hold-downs and manually shove the camper back without having to jack it up at all. Easy-peasy.

Not quite so easy for my installation, though. I’d tied up the jack mounts to serve as mounting points for the ground panel storage rack, as well as a fishing rod tube. I also had four 65-pound batteries residing inside the two benches of the front dinette, and lifting the camper risked damaging the unsupported floor. They needed to vacate the premises first. It now being 2 PM, there was no way I could disembowel the camper and be done before the end of the day, so they graciously offered me a spot in their parking lot to stay overnight and begin the process the next morning.

So, at 8 AM, I emptied the cargo box contents onto the ground and pulled the whole thing out of the hitch receiver. That would allow the camper to be moved back as far as needed to get access to the front of the truck’s bed. I then pulled the ground panels out of the rack, unbolted the fishing rod tube, and disassembled the rack, sliding the pieces out until the four jack mounts were naked. All items inside the two benches were tossed up onto the bed area. The battery removal was more involved, and this had to be last in order to minimize the downtime of the refrigerator. Pull the solar panel fuse, pull a couple of battery fuses, and start removing cable leads to the batteries, taping them to the battery boxes so I wouldn’t be as likely to screw up the reattachment. All told, it took from 8:15 AM until 10:45 to be ready for AT to do their thing. They took just a half-hour, using two men, and it was done. 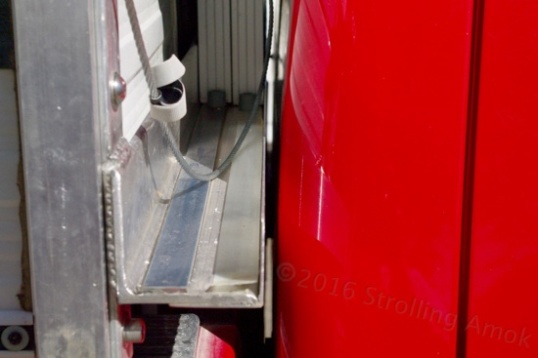 Doesn’t look like much clearance, does it? But it’s a quarter-inch gap, and from the driving so far, should be enough to do the job. It’s another “we’ll see” thing.

As to the spacers, I had brought two HDPE cutting boards to act as spacers, and some leftover adhesive sealant to hold them fast to the front of the truck bed wall. Placed right in front of the Grandby’s two bumpers, they would hold the camper back just a bit further than before. But the shop also had some massive HDPE sheets of the same thickness, and I was tempted to have them cut a board wide enough to simply drop into place. Sized properly, the board would not be able to work its way sideways far enough to miss one of the two bumpers. In the end, I chose to stick with the cutting boards, and they added a couple of strips of 3M VHB tape to each, to prevent any future shifting out of position.

My reassembly took considerably longer, but I was finished by 3 PM. I hung around a bit to negatively impact the productivity of the people on other projects, paid my bill, and departed to the nearest place I could find that might have sweatpants. Reason? The thirty-three degree overnight had demonstrated that even two blankets were marginal comfortable – I needed a close layer of insulation around my legs. I’d set the furnace for a modest fifty degrees – then fifty-five – but the window-like cascading of cold air from the tent walls worked against the perception of warmth. Temperatures of air at the rigid wall below were a good four or five degrees colder than the furnace’s thermostat read, and the bed area has three flexible walls, so some compensation is needed for the cool air flow across the bed. That done, I was dog-tired and had my first meal of the day, then headed for the Escapees’s North Ranch RV park in Congress, Arizona. I got there at 6 PM and set up in the dry camping area. I’m hoping that the guys who have the Smart-Weigh scales are here and available for duty!

Nope, the view out of the Intrepid’s window is not inspiring, but it’ll have to do for now!

6 thoughts on “An Installation Anew”