Archive for the tag “Valley of the Gods”

Valley of the Gods

Due to a misunderstanding with my GPS, I entered the west end and saw this. Okay, but not that exciting.

[This post contains 22 small photos. The larger versions are available when you choose to click on them.}

My plan had been to enter the east end of Valley of the Gods, Utah, a gravel road that spans two highways. This was because there were cautions online about having to charge through sand in order to begin the trek at the east end, and I wanted to see just how intimidating it was, given my sporadic difficulties with thick dust at Monument Valley. It was supposed to give the willies to larger and heavier towed rig owners. Instead, my GPS, set for the “fastest route” to get to the east entrance, felt that beginning at the west end would be the quickest way to get there, and I, not realizing the subterfuge, blindly obeyed. The west end is a short jaunt from Goosenecks State Park, so I feel that my GPS was either deluded about the nature of that roadway versus the highway, or perhaps didn’t even care. We’re working through this issue together now. Its conversational ability is somewhat limited, but then, I”m not in a position to point fingers. 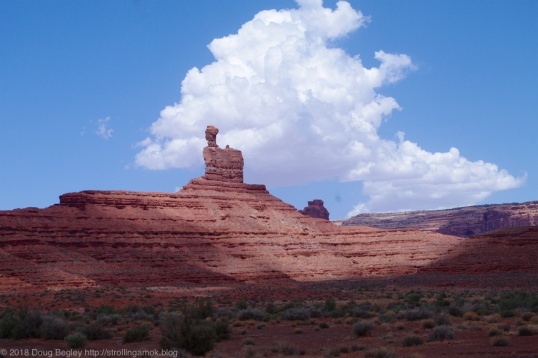 I can’t claim that the west half is no great shakes, mainly because of aggressive washboard. Too many vehicles going too fast. Five miles in to what is purported to be END_OF_DOCUMENT_TOKEN_TO_BE_REPLACED

Posted in Campsites, Tourista! and tagged Valley of the Gods | Leave a comment