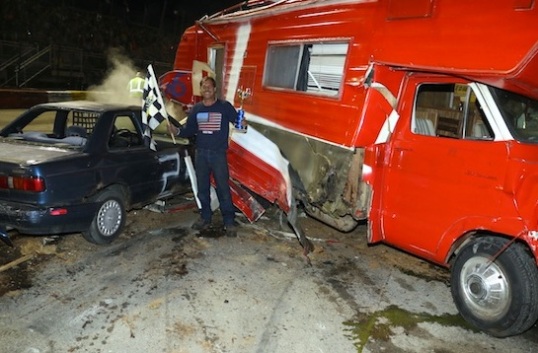 I’m not sure, either…

Last weekend, my son and his family made their annual trek to Rockford Speedway in Illinois for a special event. I wasn’t there of course, but I was in spirit. I introduced this event to them when they were young’uns, and I suspect that it will become a tradition as long as a certain one of the feature events hangs in there long enough. Rockford Speedway is a quarter-mile banked oval track, and the “Miller Lite Night of Thrills” featured Doug Rose and the Green Mamba Jet Car, monster trucks, a school bus figure-8, hornets (4-cylinder shitbox oval racing), and “Spec Drags”.

Spec Drags were earlier referred to as Spectacular Drags, and before that, Spectator Drags. Anyone in the stands is eligible to run what they brung, be it a 10-year-old Honda Civic, a full-on 1978 Dodge Charger, a pickup truck complete with bed toolbox, or your grandmother’s Buick. That last one did not go well; he skinned the wall with it. All the vehicles line up in two rows, and the first two take off together to complete one lap. The winner gets back in line, and the loser must head back to the parking lot. It’s always entertaining, even with two sluggish vehicles.

The monster trucks put on a brief car-crushing demonstration, and if a barrier is out, they do long wheelies. Now and then, one stands up too far back and at least threatens to go turtle. Considering the driver location in these trucks, it takes quite the fortitude to pilot them aggressively. I’ve never figured out the psyche of those who drive the school bus figure-8. Buses stink at both braking and acceleration. They can be tipped over easily. I keep expecting somebody to get seriously injured, but they’re strapped in well enough that it’s so far, so good. You haven’t lived until you’ve seen a school bus go into an awkward drift in a turn. Same for just skinning through the X in the track’s center. I like to assume that these buses are pretty well clapped out, otherwise they’d be sold.

But these are mere trifles to the connoisseur of mayhem. For dessert, there’s the night’s ending ritual of the Green Mamba Jet Car, a twice-rebuilt jet dragster that was created in 1968. Doug Rose began racing jet dragsters in 1962 when he was hired by Walt Arfons to drive his Green Monster Jet Car. He broke records with it until 1968 when it ran on a wet track and went into a guardrail. The crash claimed both of Rose’s legs and ended his career. He knew he would never be able to…

Well, no, wait. Doug Rose liked the speed and challenge, refusing to give up doing what he loved to do. He built the Green Mamba Jet Car and broke records with that, winning over 3,700 races and claiming the National Jet Car Championship 11 times.

37 gallons of fuel a minute.

This is one resolute guy, and the car has demonstrated a 305 MPH top speed. When he’d done all he wanted to do in racing, he began putting on exhibitions with it.

Popping the chute at the end of a 200 MPH run provokes a momentary wheelstand.

This continued until the Green Mamba was stolen with its trailer on November 1st, 2006, ending Rose’s sole income source. It was valued at $300,000. Police found a good portion of the car in a nearby Tampa, Florida “repair” shop on November 30th, owned by one Pedro Manuel Broche. Broche was nowhere to be found, and the jet car had been cut to pieces, with many of the more irreplaceable parts missing and a few later found in a scrapyard. The estimated rebuild cost in 2006 was $100,000, mainly due to those one-of-a-kind parts. Broche turned himself in to police on December 11th.

Welcomed once again by the law enforcement community, pulled over in 2015 with an invalid driver’s license and booked for “failure to obey written promise”.

Mr. Broche’s mugshot from 1997, when he was booked for “soliciting another to commit prostitution”.

Then in 1999, he was arrested for “Exposure, Lewd and Lascivious Behavior, and Trespassing”.

Now it must be said that it’s a fair possibility that none of these arrests resulted in any convictions in court, and as we all know, everyone is presumed innocent unless they are proven guilty in a court of law. It’s just that Mr. Broche has apparently had more opportunities to visit with more judges than you probably have, and his shop was sold sometime in 2006…for $100. He either bought it for a song earlier in the year despite its $50,000-$115,000 value, or he sold it for $100 to someone, oh, say, perhaps of his acquaintance. The buyer and the date of sale are missing. All I have are the above documented facts, which are a matter of public record. As for helping to locate any missing parts of the car or tools, local media reported that Mr. Broche declined, saying he knew nothing about how it wound up in his shop in the first place.

As for Doug Rose, with considerable help from race-car builder Teddy Kempgens, a motley crew of helpers and donations of money, he somehow managed to find/remake the many critical missing parts and recreate the car once again. Doug Rose must be pushing 80 years of age these days, but he’s still going at it, and Rockford Speedway is one of the beneficiaries. What is the “exhibition”? The jet car is fired up and makes a couple of slow laps around the track. While doing so, its engine whines and occasionally makes a kind of growling thunder as a long yellow flame blows out the back end while a smaller but similar flame comes vertically up near the rear of the engine. This is notable because of the sheer length of the flame blast, the noise, and the heat. If you’re halfway up the grandstand bleachers, the heat feels very similar to sticking your face 3 feet in front of a strong catalytic space heater. I can hardly imagine what it’s like sitting in row 1. 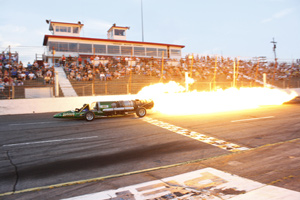 Following that, the Mamba heads for the infield, where it is backed up and chained a car-length away from a derelict vehicle which has had at the least its tires, fluids and major combustibles removed. In the video below, taken by my clever and steady-handed daughter-in-law, a van is the victim. It all starts quietly enough in the dark, but soon the throttle goes up and the engine is hot enough to engage the afterburner. Rose uses varying degrees of intense blue flame or a fat yellow roaster. The rising high-pitched whine, mixed with a deafening roar that you can feel against your chest, may not be eco-friendly or politically correct, but the shower of sparks emanating from the flame-engulfed van becomes a thing of wonder to every man, woman and child in the vicinity. It would be an understatement to say that the Green Mamba is a fan favorite.

Last time I was there myself, the victim was an old box cargo truck. Once it throttled up, the jet’s flame disintegrated the front end, tunneled through the firewall, the rear cab wall and the cargo box front wall. A few moments more, and a thoroughly-roasted little foreign car slid out the back and fell to the ground, glowing and in flames. Enchanting.

6 thoughts on “Shock and Awe – The Green Mamba Jet Car”