What’s AR-24? Some kinda side road heading east out of camp. It’s fenced off with barbed wire, using a “two stick” gate. That is, several strands of barbed wire span the opening in the fence, being attached to two sticks. When you want to drive through, you undo a couple of wire loops that hold one stick in tension, and walk it and the wire running to it off to one side. Once through, you grab the same stick and put it back where it was so that the fence is continuous again.

My getting through during the day’s walk was especially easy, since the gate was left open. That’s not normal, as the rule is to leave any gate as you find it. So, I left it open. Just a hundred feet or so in, I began to hear a clanking and pounding that was getting louder. Vehicle coming. Vehicle coming and getting the crap knocked out of it, by the sound of it! I stepped up and off to one side to observe. Weird. Young woman and maybe a 10-year-old kid riding shotgun in what might have been a 15 or 20-year-old Chevy pickup. Zoom! At the gate, she stopped, the kid jumped out, and he worked to stretch the wire to close it. Then, they were off. What their mission had been – unknown. Not much was in the bed, just a large bin and some waste/junk getting scrambled.

Now I wondered what this road accessed, how far in they had gone, and why. Long walk short, they had gone in pretty far, judging by the tracks left in the sandy parts, and over trail sections that would make a suburbanite on high-pressure tires uneasy. So this sure wasn’t their first rodeo on this road. Very obviously locals, since nobody would do what she was doing to her truck without help being just a phone call away. The further in I walked, the more reason I discovered for all the noise. 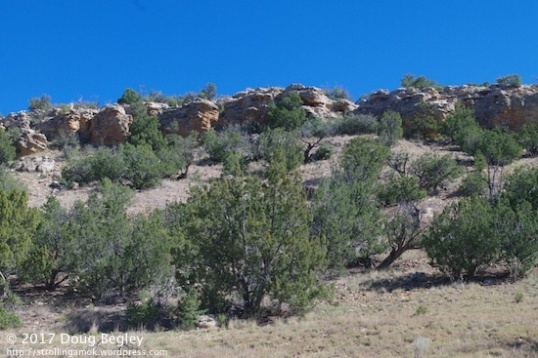 At the start, a wraparound of the bluff that runs above one side of camp. 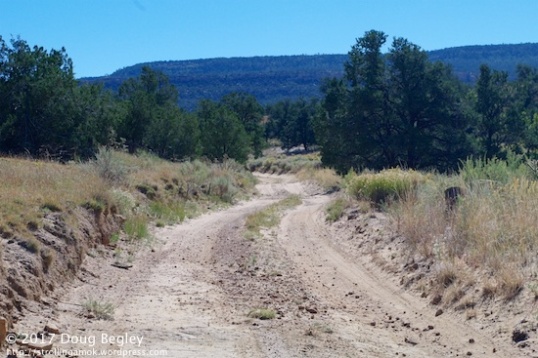 A trail just like any other, except that this one has high walls. Was it once graded regularly? 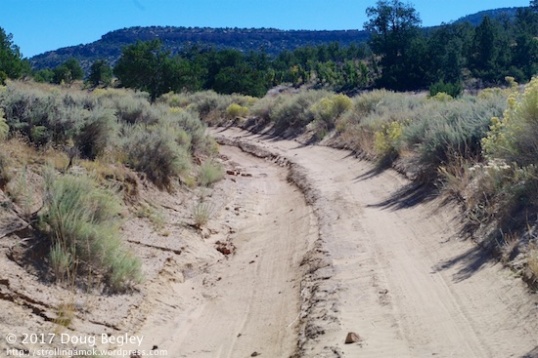 Whoa! Quite an angle going here! 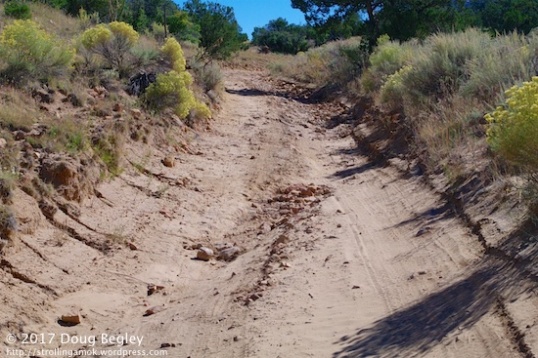 A pronounced reversal in camber or side tilt here can produce a lot of articulation and frame twist.

Caution: Skip the following section if you find mechanically-oriented drivel boring. More photos are below.

The low side of the road in the above picture is created by which track carries the most rain runoff. That can change as the water crosses over to the other track here and there, as above. If I were driving the Mighty Furd on this trail, I’d need to try to pick a path that minimizes frame twist. You, in your rig, would not. Why? There’s a situation that’s unique to 2008-2010 6.4L Super Dutys – the upper radiator crossmember is not stiff enough, and frame twist can stress the radiator’s mounting points enough that the radiator’s tank can eventually begin to separate and leak. That’s expensive. Mishimoto offers a much stronger crossmember or upper support bar – which is also expensive – but it’s not as pricey as the radiator it’s saving. Considering that I’m already on my second radiator, this is an item which will be on my Serious Consideration List over the winter.

Now, you’d think that my occasional carping about this or that quirk of the Mighty Furd paints a pretty bad picture of Ford products. Indeed, I can almost recite chapter and verse about the strengths and considerable liabilities of its 6.4L Navistar diesel engine, it being the final nail in the coffin of collaboration between Navistar and Ford. Though this weak crossmember issue is an accommodation to that engine only and is Ford’s responsibility, there are two things to keep in mind on this general topic of trash-talking brands.

The first is that nearly all vehicles are great and trouble-free when you use them casually and keep trading them in for new ones every few years. Keep them for the long haul though, and the countless number of cold starts, full loads and bad roads will bring out any weaknesses. Patterns tend to develop, whether it involves whole models or just certain combinations of options. Body hardware, structural issues, suspension and steering components, powertrain systems – the results vary over time as engineering newbies replace old salts and new managers vow to make their marks and impress their overlords. Sometimes things get better, and sometimes things get worse.

The second thing to keep in mind is that these realities play out in a manner completely unrelated to brand fans. All brands of vehicles develop patterns of problems in the long haul, and all tend in some way or other to reflect the priorities that went into their design and manufacture. A reputation for being problem-free is a fine thing, but once you depart from the realm of the three-year owner and the luck of the draw, the glitter of reputation tends to do little more than affect the owner’s emotional perceptions (which is the whole goal of brand managers). Manufacturers pay big bucks for their Motor Trend or J. D. Powers awards, because they are good investments that rake in much more than their cost. When you look behind the curtain to examine patterns of mechanical issues, one brand can be better overall than another, but its fewer faults can be and often are more serious and expensive to address. The short-term owner seldom knows or cares that they exist, and the long-term owner just bestows an affectionate name such as “Bessie” or “Nellibelle” to his or her mount, and stoically figures out the cheapest way to get through the latest problem.

The Mighty Furd? It’s a conundrum. Manufactured in January 2007 and purchased in May, I’ve sneaked into the squishy minimum of “long-term” ownership. I would hope that it would make it to the more respectable 20-year mark. Looking strictly at the service and inspection records, that seems quite likely. It has been the most problem-free new vehicle I’ve ever owned, and I’ve owned a few – Ford, Chrysler, and GM products. That statement shouldn’t be a surprise however, since automotive technology in general has continued to improve over the years and “a rising tide lifts all boats”. Despite my complaints about the cost of its routine maintenance, even its diesel engine has run like a refrigerator right up to its current 100K-mile mark. The problem is…the patterns.

Navistar’s approach to the then-new Federal diesel emissions regs was successful but, as semi truck owners are finding out, the changes needed to meet emissions requirements tend to trash motors long before their time. In the mighty Furd’s case, it can be expected to run like a champ right up to the point where one of several potential issues may cause a chain reaction of events that could make the engine have a catastrophic failure, such that it is not worth attempting to rebuild. If you drive it under load from one end of the country to the other for a living, it may well top 400K miles. Everyone else needs to be obsessive-compulsive about routine maintenance as well as gratuitous checks and fluid changes as things age. In real-world use by people who don’t put on all that many miles per year, one might top 200K miles, but 180K is more likely. If you’re kind of careless or negligent, 120K is all you may get before problems start to develop. Compared to earlier, non-emissions diesel engines, this means that it will never pay back its initial premium price, and probably won’t even live as long as a gasoline engine.

What to do? Be real nice to it, and cross my fingers. Would I ever consider buying another new Ford? Hypothetically speaking (since I’m no longer earning the bucks to be able to buy any new vehicle) absolutely! I just wouldn’t pay the stiff premium to buy a diesel, and that includes a diesel in any other brand as well. For the long-term owner, the compromises now created by ultra-low sulfur fuel and emissions equipment make the financial return on this upcharge highly debatable for all production since the 2008 model year. I also would shy away from a turbo motor of any type from any brand. For longevity in gas engines, nothing beats a dumpy old plain-Jane pushrod motor one step above the standard size. They lack any hint of glamour or sexiness, but they alone stay out of the shop over the long haul. That trait has a beauty all its own. 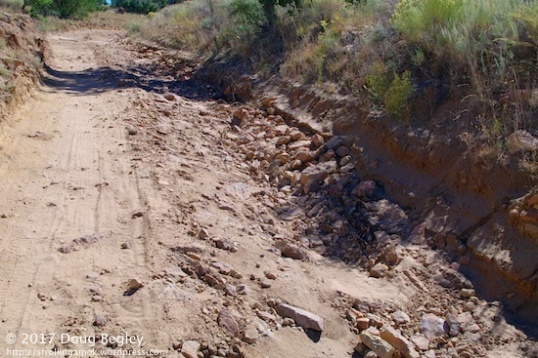 That twist feature is followed by a rocky trough that could hopefully be mostly avoided. 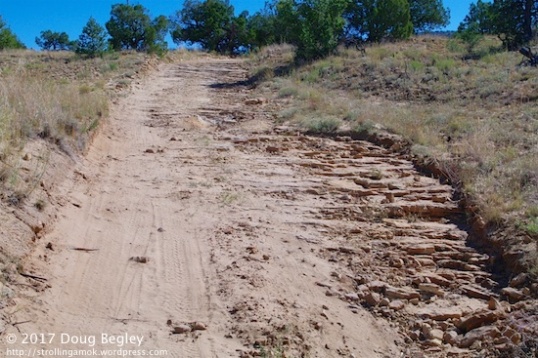 Further up the long slope are rock shelves on the same side. 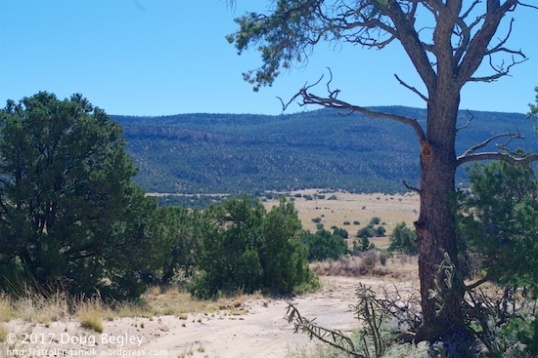 Once over the top, there are three trail branches and a broad valley with what looks like a large water tank in the distance. 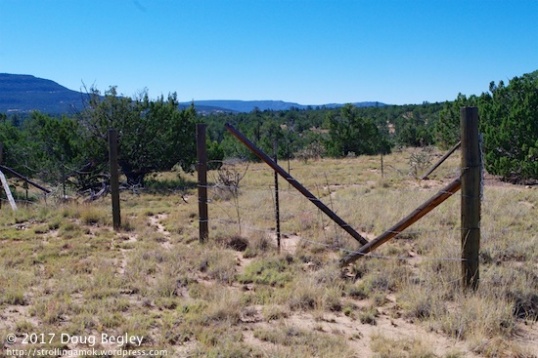 A very small triangular pen. Very small. Not ancient, and not in poor shape. Once used for overnighting with horses, or what? 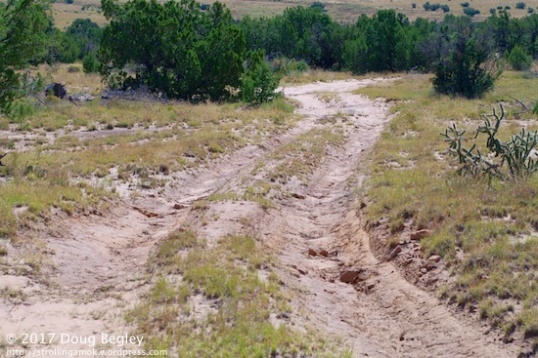 I only put this in because although it’s very easy, I’d have to bear to one side or the other to avoid grounding out a differential. I have 8″ clearance, and this looks to be 12″-14″ high. Doesn’t look like it in this photo, but it is. I can’t just enjoy a trail now – I have to analyze it as I look at it! Sad. 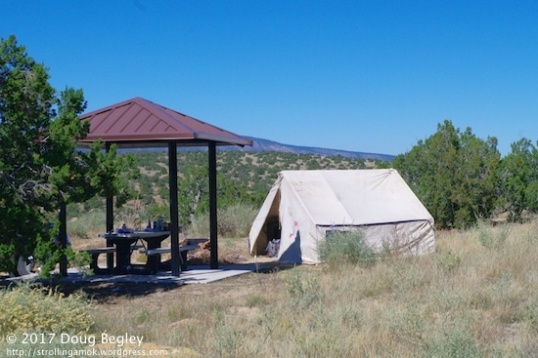 Two spots away are three hunters here for the weekend. Hunting season commenced the morning of my walk, apparently. Made me wonder what the tag limit on hikers is. Very nice guys. This classic tent was passed down to one by his father, and despite its 25-year age, it’s still clean and in superb condition. A windstorm yesterday didn’t bother it a bit!