Guess where I am now?

Since my alloted 7 days were up at the Joe Skeen Campground in New Mexico, it was time to move on, but not before driving 10 or so miles south first, just to survey the scenery. The photos below do not do justice to what can be seen from the highway, since most times there is no place to pull over for a shot. Let’s just say that the drive south toward a large stone arch is not to be missed. 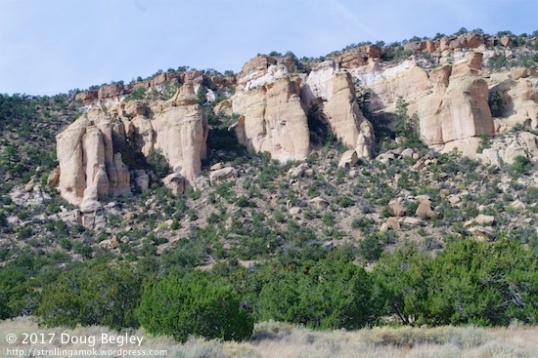 END_OF_DOCUMENT_TOKEN_TO_BE_REPLACED

What’s AR-24? Some kinda side road heading east out of camp. It’s fenced off with barbed wire, using a “two stick” gate. That is, several strands of barbed wire span the opening in the fence, being attached to two sticks. When you want to drive through, you undo a couple of wire loops that hold one stick in tension, and walk it and the wire running to it off to one side. Once through, you grab the same stick and put it back where it was so that the fence is continuous again.

My getting through during the day’s walk was especially easy, since the gate was left open. That’s not normal, as the rule is to leave any gate as you find it. So, I left it open. Just a hundred feet or so in, I began to hear a clanking and pounding that was getting louder. Vehicle coming. Vehicle coming and getting the crap knocked out of it, by the sound of it! I stepped up and off to one side END_OF_DOCUMENT_TOKEN_TO_BE_REPLACED

No cramped quarters here! I’m over where the ground is most level.

Weird name for a campground, eh? Well, Wikipedia says that “Joseph Richard ‘Joe’ Skeen was a conservative Republican congressman from southern New Mexico. He served for eleven terms in the United States House of Representatives between 1981 and 2003.” So now it makes sense, if this is who they named it after. This campground is at the eastern edge of El Malpais National Conservation Area.

The drive down was through some classical New Mexico terrain, what with its long hills, buttes, and great vistas to tempt you out of your lane as you gawk. I especially like how some buttes are rimmed with a solid topping of rock that has since split into gigantic boulders that eventually lose their support and drop a ways down.

At first blush, this campground is great. It has 10 camping spots, each with a covered picnic table and waist-level grill. Mine also has a ground-level grill to boot. As a BLM-run camp, one can stay here 7 days, and can then hang out elsewhere in the El Malpais for another 7 days in a month. For me, this is starting to get back to END_OF_DOCUMENT_TOKEN_TO_BE_REPLACED