The current view out my “kitchen” window as I prepped my morning coffee. Not difficult to adapt to, in my opinion!

When leaving Wheatland, Wyoming for Dillon, Colorado, the fastest and shortest route was to take the Interstate to and through Denver. Considering that I poke along at a mere 65 MPH instead of the 70-80 MPH limit, that limits the theoretical time advantage of such a route. Having in the past swung into battle in Denver with the Defiant travel trailer, I decided that the more pleasant option was to instead add just a few miles and take a two-lane to Laramie, Wyoming in order to better take in the sights onroute. From there, more two-lane would take me to Dillon, Colorado. That worked out wonderfully.

Southern Wyoming is a treat. On long, lonely stretches that connect ranch entrances to the nearest distant town, I passed two pickups by the side of the road and two ranchers dressed in Western gear standing at the bed of one truck. By his arm gestures, one seemed to be describing something to the other as they conversed. Time to catch up on stories. A large wildlife area came up as I went on, and with it low mountains that the road twisted to stay between. These mountains were rugged and had an odd sandpaper surface, along with a deep tan color that through my amber sunglasses looked chocolate brown. I should have stopped and taken a photo for the blog, but I tend to overdo it when I repeatedly stop a commute to collect photo fodder that might be usable. At any rate, the drive between Wheatland and Laramie is a memorable one. Highly recommended, if you’re going that way. 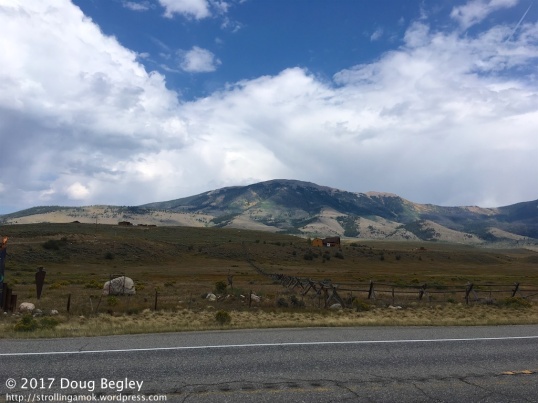 A typical roadside view near the northern border of Colorado. There aren’t too many trees other than pines here, but those that aren’t have all turned to full autumn colors already!

Once out of Laramie, Colorado comes up without the benefit of any signage. The principle difference is mountains that are much more rounded, and occasional signs with arrows at turnoffs that read “National Forest Access”.  There were many of them along the way, and I wondered what camping opportunities they might hold, but the very few townettes that exist in the area had no supply sources to speak of. Not workable for my setup, so on I went.

It was a picturesque drive, with one mountain pass in particular consisting of a long, relentless climb followed by a similar descent. The climb was eventually enough to kick in the Mighty Furd’s thermostatic radiator fan briefly at the peak, producing a indignant roar that announces its coming to life. That’s an unusual event, since there is only one other, shorter and steeper climb in Arizona that has made it kick in during all the 100,000 miles I’ve put in. The temperature gauge on the dash never budges a bit, so it somehow decides to make a preemptive strike on its own, to keep the needle there. 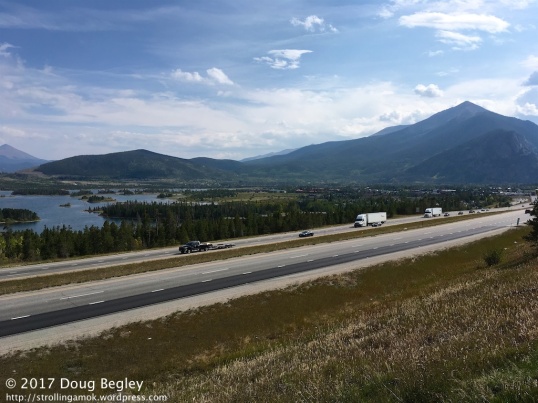 This is not the view from your average Interstate rest area.

I arrived in Dillon around 3 o’clock, and proceeded to the Stop #1 that I had planned, an unusual viewpoint/rest area off I-70 with space for cars and trucks. I figured I’d be tired by the time I arrived, and could use this as a stop to overnight before hunting for a camping site the next morning, seeing as how I’m completely unfamiliar with this area. On the pro side, the view was fab and few vehicles were there. On the con side, the usual truck noise and inconvenience of a single-night unpack/pack routine (I’m lazy) worked against it. Plus, Colorado does not officially allow overnighting at its rest stops. This stop has the reputation that you won’t be bothered however, unless there’s a problem requiring the presence of the law enforcement community. Hmmm, 3 o’clock. What were the odds of finding a suitable campsite, a procedure that had been difficult in South Dakota’s Black Hills National Forest? Well, what the heck, I could always return if I was unsuccessful. I set some GPS coordinates for the entrance to the Peru Creek camping area into the gizmo, and with an estimate of 16 miles, I decided to set off.

This gave me a tour of several towns clustered together, and each is sizable, with some pretty fancy signage announcing each in a manner not inconsistent with the principle of one upsmanship. Everything is upscale and just so in appearance to such a degree that it made me certain that quiche might be considered a staple of life here. Lots of little trendy neo-rustic image shops packed together on twisty, clogged little streets that promise no chance of parking anywhere nearby. But it looks cute. I’m just hoping that I’ll have workable access to my supply sources in this tight, busy traffic area.

Once out of town(s), the little 30 MPH road to Peru Creek, called Montezuma Road, is pleasant and problem-free. The turn-in to FS260 dirt is notable only for its “Welcome to Bear Country” warning sign. The path in is about 1-1/2 lanes of dirt and gravel, swelling to 2-wide at points, which is handy because it has a surprising amount of traffic. I had  a car, two Jeeps and an ATV going the other way on my trek up. Its oddity is that it’s not exactly rough or anything, but it is heavily peppered with deep sinkholes that reminded me that it’s about time to check the Four Wheel’s four bed mounts. Rock & roll. At least the sinkholes are smooth-edged instead of resembling sharp potholes. Between that and the complete absence of washboard, lowering tire pressures would be neither necessary nor helpful. You just go slowly and ride out the SS Intrepid in a heavy chop. I have 25-minute dashcam run over a bit of the paved Montezuma Road and then the bumpy ascent up Peru Creek Road to hunt up a campsite, but the Internet connection here is postponing that upload, along with some more photos. The video is of interest only to trail voyeurs anyway.

At first, it looked like finding a site – any site –  was going to be difficult, since most of the road is cut into the side of a steep slope. Then a few potential sites turned up, the third being usable but tilted. It would work for more traditional campers who cook outside, but it’s more problematic when the food prep is inside the tilted rig. You know, liquid in pots being badly tilted and things rolling/sliding off the counter. I could make it work, but time easily allowed more exploration. Then my current site appeared, and although it was commendably lumpy in every direction, I suspected that simple tire positioning could make it work. Between little slopes, mounds and bulges in the dirt created by a host of burrowing critters of some type, it didn’t take long to just creep around and hunt for the one spot that would allow the Furd to level. Presto! Now I could set up camp and not have to break it until I needed supplies. Time to do my Elmer Fudd “Ah, west and wewaxation at wast!” This is a primo area, for sure. A couple of tall pines block my early morning solar exposure, and thunderstorms are expected to hit part of every day for a short week, but my ground panels are deployed and things should work out. Lows are expected to be about 40 degrees with highs just over 70, which will let me dress and go out walking in the clothing I prefer – but cooler air is on its way. That gives the furnace more of a nocturnal workout, but that’s what it’s for! 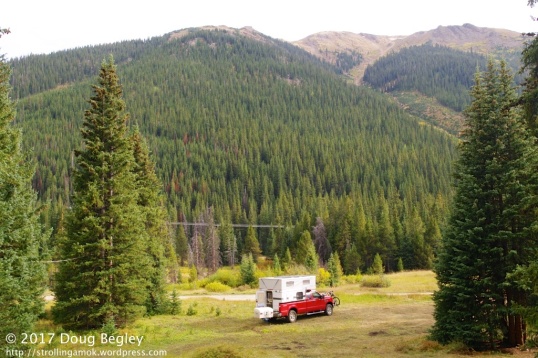 This works for me.

A breathy exercise walk at this 10,300+ elevation turned up several other fully workable campsites down short spurs, as well as a mid-size TT parked next to Peru Creek itself just after fording it on a long branch off the trail. All these are just short of a very popular Chihuahua Gulch Trailhead. The creek seems to be one of several merging in the area to form a notable flow that quickly spills down along a bed of rocks. Beauty everywhere you look.

This particular site is a winner for small groups, too. 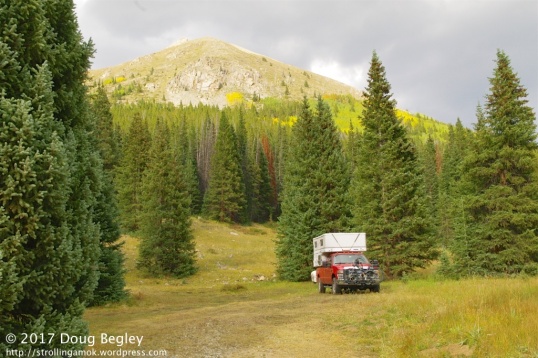 I really lucked out on this one, eh?

8 thoughts on “Heading for Peru Creek”