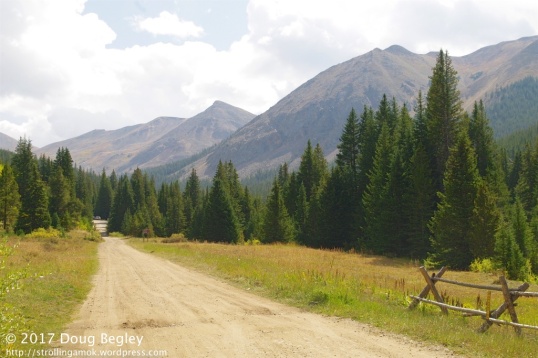 This post is a follow-up to the initial one on the Peru Creek camping area near Dillon, Colorado. Because of a problematic cellular signal, the only way to do that was to leave there. Not a unique situation in Colorado. But ahhh, the scenery as you drive along!

This very rough trailhead is officially adaptable for vehicles as well as people and mountain bikes. As I walked past, this Toyota SUV that had money poured into it gave it a go. It returned maybe a half-hour later, while a stock Jeep that preceded it stayed in for quite a while. I could not handle the climb rate on foot, so I could not gauge the degree of mechanical challenge. Some big rocks at center maybe a hundred feet in promised some adventure, however.

A low temperature front about to move in just as supplies were starting to run low made it a good time to change locations rather than return. I’ve never been above 8,000 feet before, so the physical effects of 10,000 on my aging frame helped move that decision along anyway. 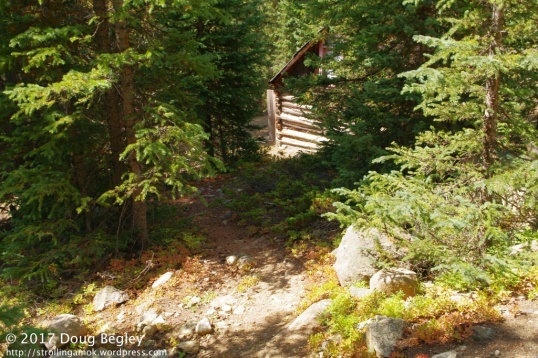 An abandoned log cabin was intriguing. Part of its planked roof has lost its corrugated sheet metal covering, and several big pines have grown in too close. Despite deterioration, the four log walls and plank upper still look reasonably sound, which makes my Inner Idiot cry out, “Hey, this could still be made to work! Somebody could make a home out of this again!” But that National Forest thing stands in the way, of course. There are two decent homes on the way up here that I assume were grandfathered in, complete with two mailboxes at the main entrance.

The view on the way back is just as nice.

The 25-minute, 1-Gig dashcam video below is not the most exciting presentation ever, since Peru Creek Road is passable by just about anything. It’s just for trail voyeurs who want to get an idea what the trail and scenery are like. There were no motorhomes up here, though I would not recommend a try by a 40-footer or anything with a toad, due to the impracticality of backing such a combination up in order to get turned around. But I did see two good-sized travel trailers in addition to truck campers and tenters. The main thing this video highlights is the effect of dishing on this otherwise easy road. It makes even SUVs bounce around, and the Intrepid’s stout spring rate slows progress to a predictable crawl in 4WD-low, which is particularly desirable on the way out, to avoid riding the brakes for two miles.