Though your attention is naturally concentrated on the trail itself, it pays to stop and look around!

[Caution for cellular data users: this post contains a heap of photos, and although they are all low-resolution pics, those readers on more restricted cellular data plans may want to wait for a WiFi hotspot before clicking on the “more” link that pulls down the whole post.]

Today’s post is about what I saw in Green River, Wyoming as I went further along a trail that I had originally hiked along. I include these posts because, well, I spend time exploring on my Aurora e-bike, and getting out there in one fashion or another is what it’s all about. Since I don’t do postcard scenic masterpieces or flower closeups, what I saw, you see. This trip meandered along miles of up and down, and I arrived back at camp both looking forward to rest and regretting that it was over. 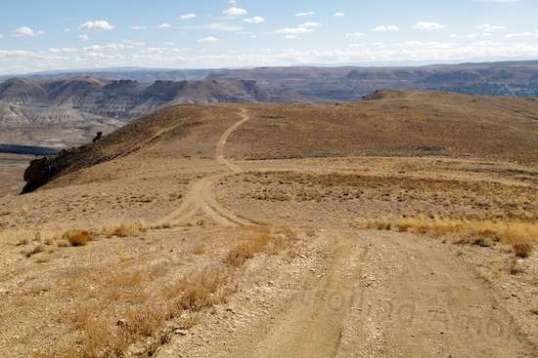 Because you can’t see what’s beyond the next hill, getting to top of each one makes you discard the notion that there isn’t much farther to go before the end.

Hard to imagine living here and taking it for granted over time, but I doubt that many do.

Gratuitous e-bike shot. I think this is my earlier hike stopping point, and I was slugging water and pressing on just to make it back. The Aurora’s reliability lets me go further, and without concern. 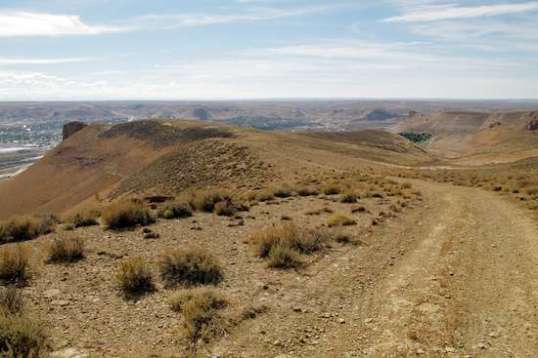 The end is in sight, or so I think. These distances appear shorter than they really are. 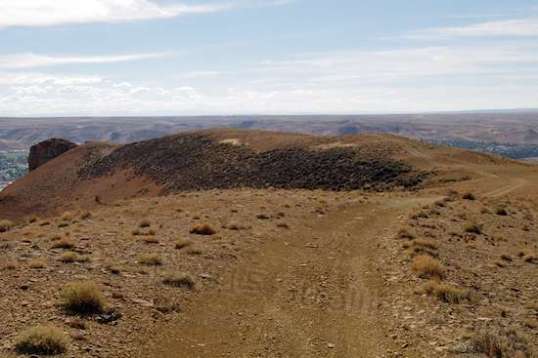 Closing in on the first bump.

Maybe not so little. It took full power and bottom gear to make it, plus some help from Daddy. 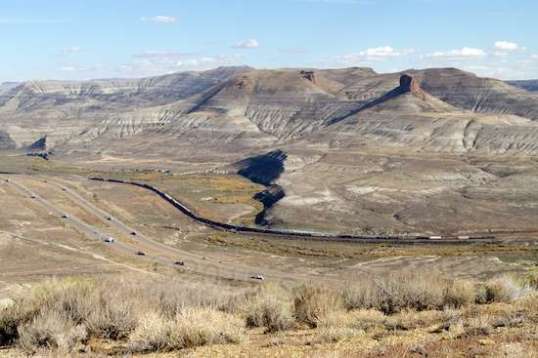 Top of the world! I-80 and dual railroad tracks lead to Green River, on the right. Too distant to hear, those tracks are the busiest I’ve ever seen. The surrounding terrain makes all the activity seem very limited.

The eastern half of Green River. 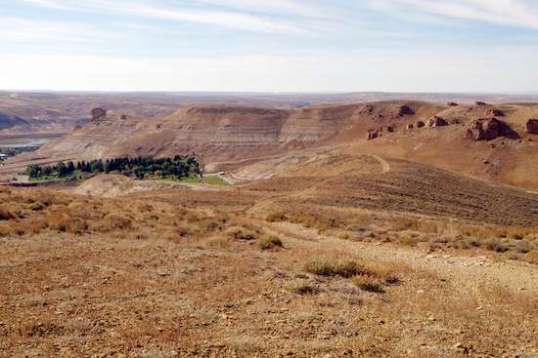 But wait, the start of the return shows a side trail to…?

A steep drop too loose to bike down safely. 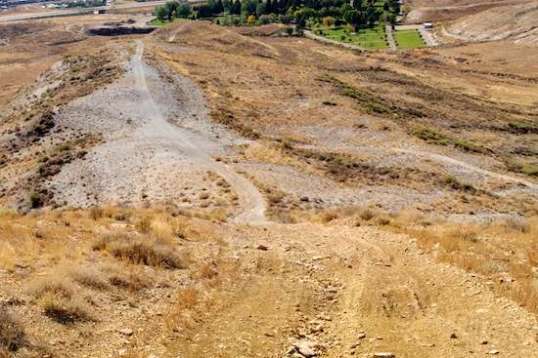 If you think you’re gonna bonzai this, good luck. It’s just an access to the antennas on top of the hill I was on. 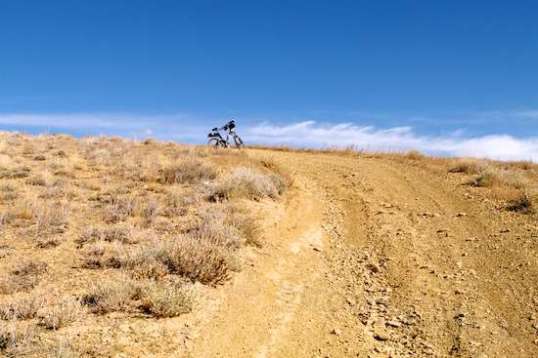 A look back. As with a 4×4, it’s best to get out and take a look to see what you’re getting yourself into in this country.

Remember that double-step hump? This is the view back toward camp. 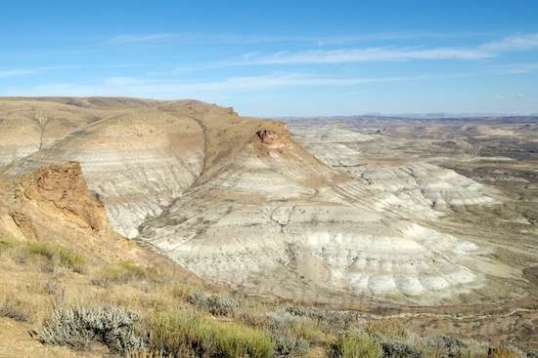 That “loop” in the distance is a trail up a hill that became so difficult that people made an alternate. I initially wrote it off as a walker, but made a start on the Aurora. Technically could have made it, but didn’t feel like standing on the pedals to keep the front tire down and the steering intact. I walked and let the bike power itself up. 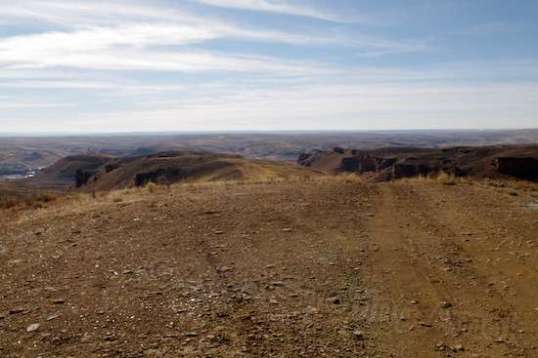 About a half-mile from camp, I couldn’t resist taking another main branch. That led to a clearing usable for a small rig to camp on.

A look to the right shows a hotel planted at the start of Wild Horse Canyon Road, but that isn’t where my attention was drawn to. 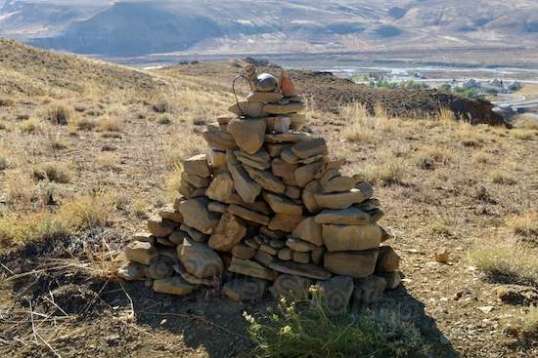 There were several of these along one short section of the trail. Rightly or wrongly, my tendency is to lump these folks on the same side of the balance as those who paint graffiti on boulders, or dump beer bottles and upholstered furniture along trails. It expresses little but boredom in this monument to self. 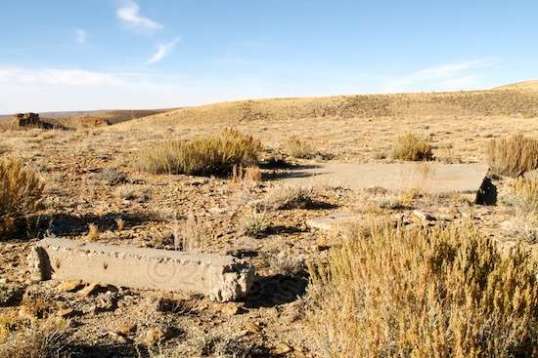 I had only questions as I looked at a shed-sized smooth concrete pad, a small square one with hold-down bolts, and a long piece broken off of something.

Not sure what motivated this to be put up, either.

And there were several more of these small mounting pads in odd positions.

But the trail continued on toward this fortress of rock.

To even walk this, picking your path would be needed. To drive it, I think you’d need plenty of ground clearance and suspension articulation, and locking diffs.

A newer alternate climb is to the left, much more do-able but seldom used. The dive down offered a very nice campsite location. Another trail avoided this hill entirely, and wound around to one side, out of sight.

On the way back, it occurred to me that this branch might well be that alternate to avoid the dive, but I decided not to be a nuisance for a foraging wild horse in the distance (at center).

There were a couple of these vent pipes, hissing. Must have been installed a long time ago, because the surrounding land isn’t scarred up.