Well no, actually, this is Wickenburg, the place I left. I just put this here as a point of reference.

Busy day, yesterday. I figured I’d do a quick tour around a sizable loop of trails approved for car travel and camping. It turned out to be an 11-mile tour over a mix of soft dirt and rocks, and I couldn’t help but check out several branches heading this way and that. Over that distance, I found 3 or 4 super-secluded, pretty little sites. One is quite close, but does not allow the peculiar E-W aiming that the Defiant needs, nor the sun exposure either. The other sites require true high-clearance vehicles to access and, if it rains at all, four-wheel-drive. Off the main loop, some ruts are so deep that even the Mighty Furd would high-center. For a pop-up truck camper or traditional high-clearance van, the few compact sites scattered about would be very nice places to be. Slow trip to town, though! 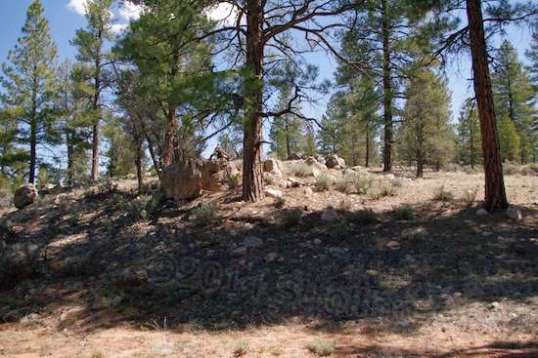 Biking down the trail and looking off to the side. Much pleasantry.

I ultimately returned to camp, moved the Defiant over a width to get the solar panels into the sun, and then hung them up to start churning electrons. Nearby tall pines do not the best solar situation make, but since the system is configured fairly aggressively now, it works out fine. The Verizon data signal is good enough that kicking the Wilson amp into gear causes intermittent dropped connections.

There are elk tracks aplenty on the trail here, but I did not see one, so far. Maybe it was the dirty rear disk brake on the bike which squealed each time it was lightly applied. A splash of water would have fixed it, but I did not know how long I’d have to make my water last. Last year, I saw several elk right across the highway as soon as I pulled in. They really congregate a little further north, once over the border of the Grand Canyon National Park. I’d like to see some. Then again, if this were fall instead of spring, I would then not like to see some – not without being cocooned inside the Ford.

My fav part of any trail, the gradual downhill.

I must say, the entire trip took hours and my butt was cooked by the end, but the ride itself never at any point got old. The environs and the trail itself never ceased to amuse. I’ll let the pictures describe the tour. 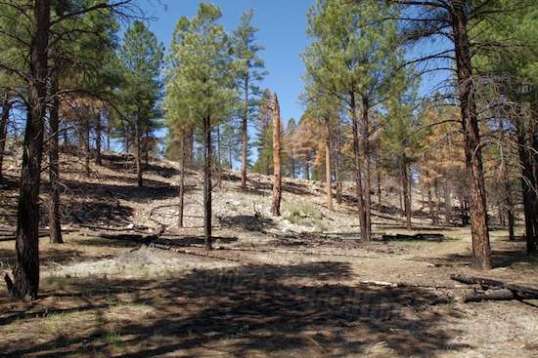 I hardly noticed how much I missed trees until I got here. 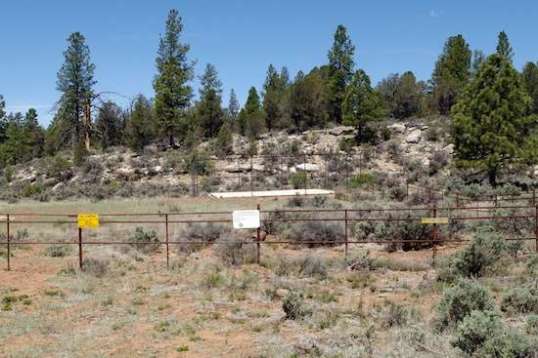 This is a water catchment for the critters. No camping within a quarter mile of this! Big old metal tubs some distance away were replaced by this.

Dead center here is a flat slab of rock forming a great roof over what looked to be a good overnight spot out of the weather. There was no soot on its underside.

Still listed as approved for motor vehicle travel on the MVUM, this trail has been closed for awhile, I’d say!

The whole aura of the place is just oodles different than if I’d idled out here in the big Ford. No way I can walk this far either, so I’m thankful for the Evelo e-bike. A normal person would do fine on any mountain bike, but he’d feel it on returning to camp! 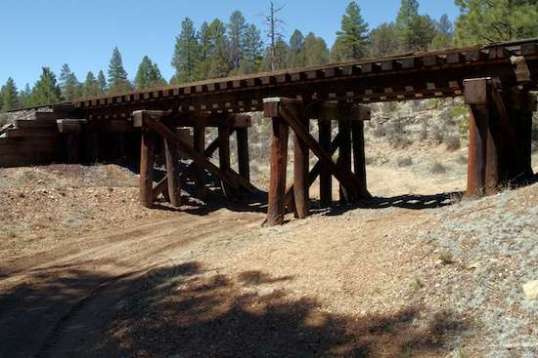 Something I hadn’t expected – a railway overpass, and it’s too low for anything truly sizable.

Add another order of magnitude of unexpected! The Grand Canyon tour train! That has to be some unique ride. It must have had nearly a dozen passenger cars, and most had people waving to me, so I did my best to look like a colorful character, and waved back. Now I know how Queen Elizabeth felt. 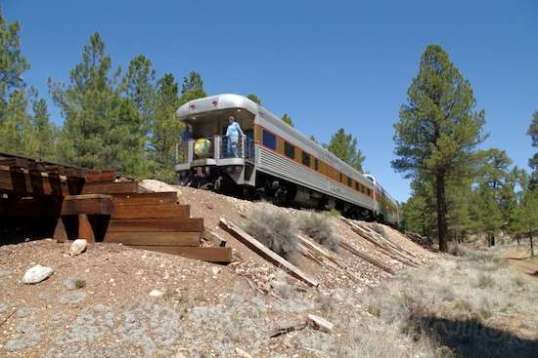 That thing was quite a sight in itself! Yep, the lady in blue on the right waved when she spotted me, too.

Here’s the odd part. This is a different, taller crossing, and it’s not much more than 50 yards down from the first. Why cross under, only to cross back? Given that this is fairly close to the airport and the expense to create these, all I can assume is that the usage plans changed radically at some point, and here we are. Entertainment!

Many spots were tilted like this, and some too narrow to cheat by moving over. Pack your stuff well!

This was interesting, and I’ll have to explore it further later. Closed to ATVs, Jeeps and motorcycles, it is open to hiking, equestrian travel, and bicycles. No signs of any kind of tracks I could find, apart from my own on the very short run in I made on the bike.

Gear up and go! I wouldn’t drive a modern minicar down here without paying attention to that center berm.

Believe it or not, that white rock at center would put the Defiant’s dropped axle tubes in jeopardy. She’s a boulevard queen, not a trail blazer. This and all the other hazards would be no issue at all with newer travel trailers. 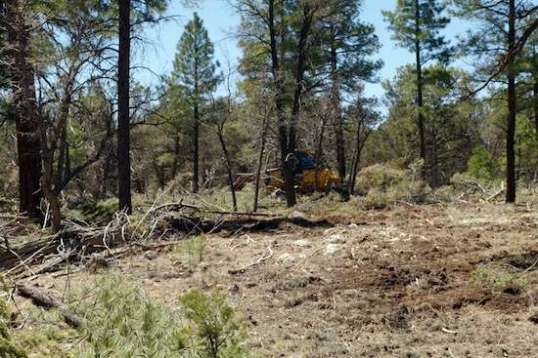 That yellow thing at center is a large Cat bulldozer. They have aggressively thinned out many acres and done controlled burns, and I know that the thought of a major fire petrifies the town.

A few hundred yards of this is enough, and yet picking your way through keeps it interesting.

Ugh. No more picking a path. You just choose a side and go. It’s tough on tires and that front suspension. That full-suspension Aries model starts looking pretty good about now. 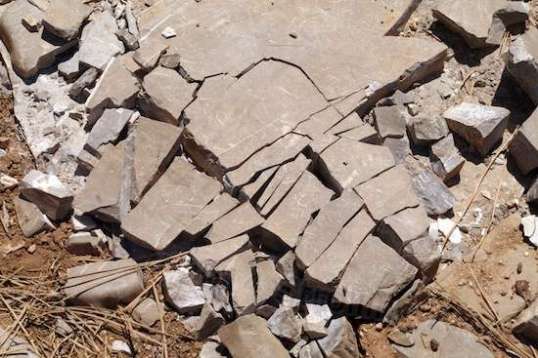 The bulldozer was driven back here, not trailered, so it disagreed with a few rocks along the way.

I could not believe the amount of ground taken up with downed trees which had then been scorched, and single bushes burned in place. I’m ignorant of forest management, so it seems like something very meticulously bizarre.

Oh look, who owns that vital wonderment ahead, that unmatched arboreal adornment? Eh, it’s that guy who bikes for miles to wave at passenger trains. 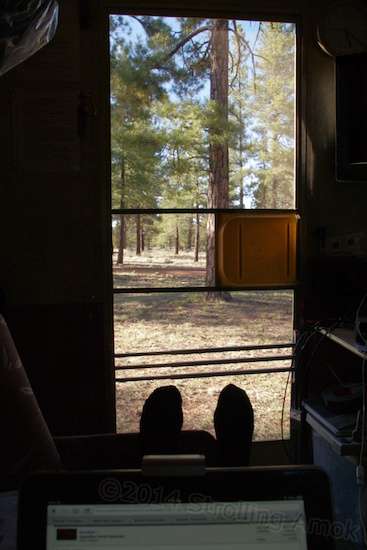 Bike stowed, trailer moved, panels deployed and iced tea in hand, the outside view while I relax and do some research is beguiling.You should see the view out of my office window!