Archive for the tag “VHB tape”

Revenge of the Catch-22

Per my last post on the topic of solar panels for the Mighty Intrepid/FWC Grandby, I had a decent planned setup with a 100W solar panel at each corner of the roof, each panel being held with a 20.5-inch long ABS adhesive mount fore and aft, for aero and dependability reasons. I figured that would be long enough to catch a couple of structural roof ribs under each one, and apply an abundance of adhesion to hold to the roof securely. The only real limitation was that I could come only so close to the roof edge because of tapering of the roof’s thickness.The panels would be held to the mounts with horizontal screws. The panels might be closer to the start of the taper than I liked, but it seemed promising.

As for using ground panels to add solar power, stowing a solar panel in slides mounted under the Grandby’s bed overhang has been done for awhile. After all, that platform is engineered to carry a heap of weight, being a 7″ or more vertical aluminum extrusion wrapped around the bed perimeter. Plywood forms the mattress platform, and a 20-pound panel hung under it should be no big deal, right? Given that the camper is now installed and that drilling holes from underneath is hit or miss because of its closeness to the truck cab’s roof, I thought about attaching a panel-carrying set of rails underneath, held by 3M VHB (Very High Bond) tape and supplemented toward each end with screws, since drilling there from underneath is not a problem. But what was the facing surface under this platform? There are a few different versions of VHB tape, each tailored for certain surfaces. I emailed Four Wheel Campers to ask. 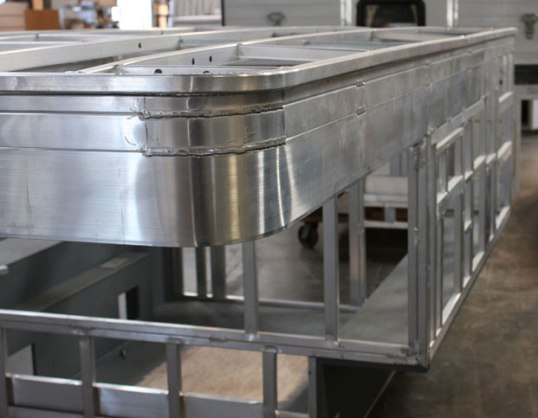 This is what holds the bed platform, so there’s no concern about hanging some weight under it – as long as it’s done properly.

What I promptly got back was a reply saying, “If you could please call us at ___-___-____, we can discuss a number of issues at the same time and wrap this up for you.” Say what? I’d expected END_OF_DOCUMENT_TOKEN_TO_BE_REPLACED