High over Green River, Wyoming are loose strings of trails that are great to explore on a suitable bike.

Given some delightful weather and a mild breeze, it looked like a good a time as any to discover an alternate way to get to town, other than Wild Horse Canyon Road, also referred to as White Mountain Road on some devices. I figured that an alternate would probably be preferable, since passing vehicles produce huge plumes of enveloping dust on the main dirt road in. A recent pass by a grader on the nicely-graveled top section has made the surface so loose that biking it takes considerable care and power – you’re better off riding the wide dirt ditch on either side.

At this elevation, that look leftward is quite a treat.

My online map of the area showed that there was a trail branch that dropped right into the middle of town. The Defiant is encamped right at a trail intersection leading to it. Considering that a vehicle occasionally turns in to head down it or return, it seemed like a possibility. But it wasn’t a certainty. Both GPS and online map accuracy is wanting, when it comes to trails. The Lost Dog trail to the Green River itself a few days before had distinctly shown the trail leading straight ahead, with a branch cranking awkwardly left and then twisting a bit. The difficulty with that was that this straight continuation was a phantom that lead right off a cliff, while the odd crank left was actually the only way to descend in a rugged area. Blast along at speed in the dark, depending on the GPS, and it could change your whole day. 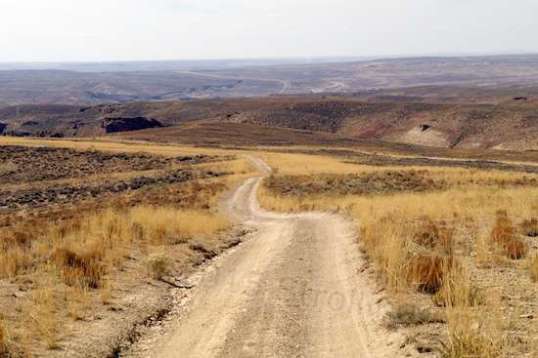 The trail more or less follows the broad top of a ridge.

It’s more common to see paths that are not on any map, and that makes sense. Most paths for utility access are on maps, but when the utility was long ago relocated, the early, disused path is unlikely to be shown. A few lead to early ranches that no longer exist, and some trails exist just to amuse the 4×4 or ATV locals with their difficulty. Still other trails seem to wind on and on for purposes that I have never been able to figure out. The combination of distances, difficulty, and the questionable value of the land to any enterprise would make for a spirited debate over a campfire, especially after the party had spent a day battling it and still appeared to be in the middle of nowhere. Out here, there is a great deal of hoopla about some historic trails. Others served their purpose but fell through the cracks in nostalgia, and are now simply two-track unknowns that even the locals may not recall. 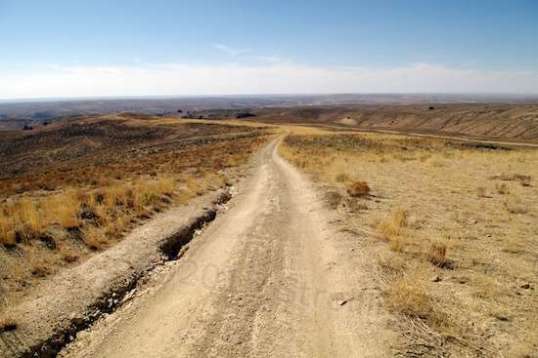 Left track, bad. Center ridge, bad. Right track, all that’s left. I stopped many times just to take in the view all around, and this area never fails to please.

Trails like this demand suitable tires on a bike. Loose dirt just a quarter inch deep can cause steering traction issues when the surface underneath is tilted off to one side, and trying to stick to the high center ridge is seldom workable. The lower of the two tracks is often eroded and carrying gravel and sizable rocks. On a slope, all this can make for traction issues with brakes and steering. You can take in the surrounding vistas, but this is best done at a stop, since taking attention away from picking a path or monitoring brake pressures can be hazardous, real quick. New just last year, the Michelin Dry Country 2 tires are not quite aggressive enough to deal with this thick loose dirt and gravel. The low lugs on the rear tire are already worn halfway down, but because of the weight are still less prone to slip than the lightly-loaded front lugs.

This is a branch going up a hill, just for its own sake. No thanks! Over time, I’ve come to realize that, when biking in a group, you turn to the younger ones and say, “Bet you can’t make it to the top!” Then you just watch the entertainment and keep the first aid kit handy.

Given that this is no place for an old-school coaster brake cruiser bike, the Aurora itself posed no problems at all. Dust makes the well-used twin disk brakes squeal and honk, but a sprinkle of water clears the dust away and ends the issue. They are easy to modulate right at that point where less pressure would let the bike speed up on a downhill, while more pressure would break traction. Apart from occasionally readjusting to compensate for brake pad wear over time, brake performance and feel is no different at the bottom of a long descent as it was at the beginning. The Aurora’s brakes are not particularly sophisticated as bicycle disk brakes go, but given their effectiveness, I’d think twice before I ever went back to traditional caliper brakes, which show more “personality” in challenging conditions.

Approaching the edge of a hill and some boulders that would make for an interesting overnight with a sleeping bag and a campfire. The city of Green River below lights up like a vast Christmas tree at night, its light twinkling en mass.

The optional NuVinci shifting collar can get a bit reluctant in pulling its cable for a downshift while under full power, but this varies over time, and can be lessened by momentarily letting up some pressure on the pedals or trimming back throttle. Given that this bike has effectively been “left out in the yard” for a year without touching the collar or cables, this should not be real surprising. Today’s ride showed no issues. As far as the core bike goes, it’s business as usual. Climb on, and ride. In country like this, that’s both a pleasure and an adventure.

Part of the view from the “campsite”. This looks rather flat, while the real thing shows its depth in 3D!

A shot with the camera swung around in the opposite direction. It’s hard for me to imagine living here, with all this accessible at the outskirts of town. 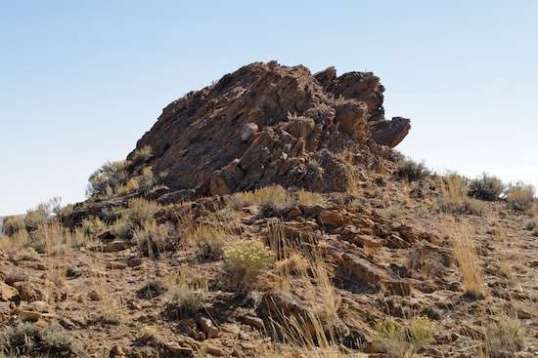 A nearby rock structure that resembles the stub of a petrified tree, its fiber snapped off and left ragged. 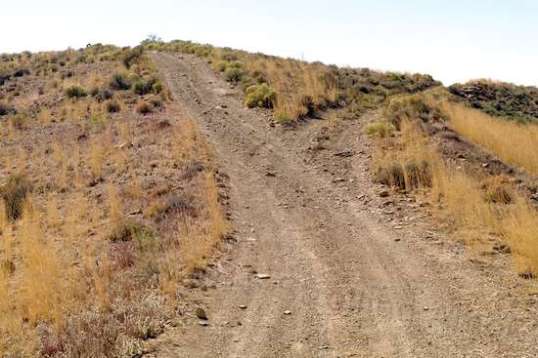 For me, the end of the line. It likely loops around the hill top. Where I’m standing is the supposed start of the branch into town that the online map indicates to my left. It’s pretty steep, there’s nothing there, and it looks like there never was. No trail scars, no erosion, no nothing.

Looking right on the return trip, well, i’m thinking two weeks is too soon to depart.

My camp is over the hill toward the left side. While I was out, some folks in a minivan arrived to make camp for an overnight. The view below from there is magnif – I’d already checked it out on the way. 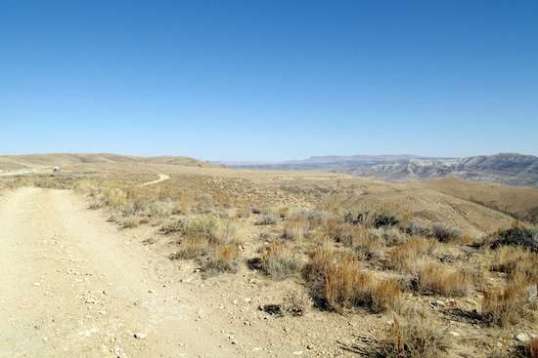 Rancho Begley. There’s a tiny red and white speck at left center. That’s the Mighty Furd and the Defiant. This place is a good way to get a solid grip on the meaning of the term “vastness”.