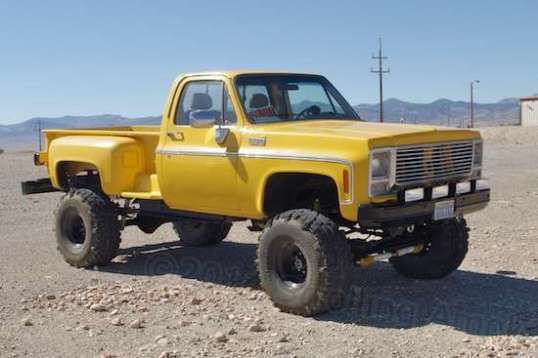 This thing has been parked by the street since I’ve been here, for sale.

I’ve been passing an old but fine Chevy K-20 pickup each time on my way to the grocery, hardware store or laundromat in West Wendover, NV. So I thought I’d post some pics. No price was posted, and it’s been there quite a while, so either he’s getting nothing but calls offering “$300 an’ my seester”, or he’s unjustifiably high on asking price. Hard to guess, because there just aren’t that many people in Wendover and West Wendover combined. By the way, the title for this post does not refer to its tires, which look perfectly okay.

i’m sure the EZ-Ride Suspension is great, if only I knew what it was, or cared. 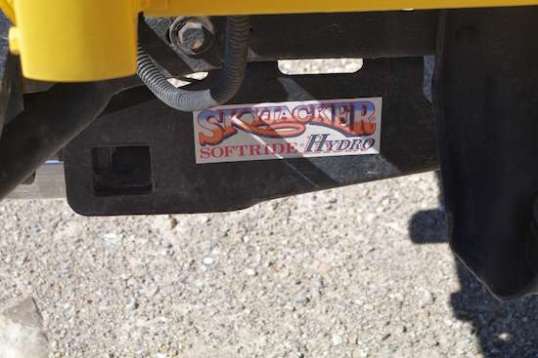 Maybe an off-roader would know what this is, but I suppose anything you can do to soften up a K-20’s suspension would be good.

Me, I love this thing, even though I seriously doubt I could climb into the cab (or bed) without a step stool.

I think it has twin fuel tanks straddling the drivetrain.

I made a classic mistake while biking in town the other day. The Aurora’s rear tire was low on air, so I added some by tire feel at a gas station, since I didn’t have any gauge available. I’ve done this a lot, but apparently the calibration of my fingers is now a tad off. The rear tire blew out its sidewall about an hour later, sounding like a .22 pistol. Mind you, this is one of two 20-year-old Maxxis tires I swapped in from my old Raleigh, and age may well be a factor. The bike being heavy as it is, lifting the rear wheel clear of the ground for more than ten feet wasn’t going to happen. I managed to walk it a block away to the KOA campground in town, and left it there. I was fortunate to have made it that far, because these tires fit more loosely on the rims than the originals, and it was threatening to tear off a plastic rear fender bracket on its next rotation.

The old tire, thanks to me, has decided to cease function.

This was about 1PM, 9.1 miles from camp. At least I had my water bottle. I walked back up to the main drag and hopped a casino bus to try removing a mile or so off the walk. I walked another half mile, and realized that I still had a 3-hour walk ahead of me. This posed problems with inappropriate clothing in full sun at this time of day, as well as knowing that my water wouldn’t last much more than half that. I happened to be near Wendover’s city offices, and found that there was a taxi service in town. Fortunately, I was wearing my iPhone and was able to call for a ride. The good news is that they showed up in 15 minutes and carted me out to camp, no problem. I was able to crank up the Mighty Furd, with it’s front bike carrier, and go in to pick the Aurora up. The bad news was that both the local taxi and tow services stick it to anyone coming or going to the salt flats. Try $30 for a 6-mile trip. But I considered myself fortunate to get back with very little ordeal factor. It was notable that when I returned to camp with the Aurora, that the front tube had gone flat as well. Oops. I had picked up a cheapo Bell tire and standard tube while in town, but realized that swapping in piecemeal crap would not last long or really solve any problems. Decent new tires and tubes are on their way, and I’m trying a different tread and construction style just to experiment. A small tire gauge will become standard issue, if I can discover a reliable way to keep it on the bike. These distances make it necessary to start thinking about also stowing a wrench, tire tool, spare tubes, air can or pump, etc.

At the end of the day, this was my view from a lawn chair under the awning.

Not long before sunset, realizing that it would realistically take a week to get the Aurora back up and operating again, it stuck me just how handy a device the e-bike had become as a replacement for the Ford pickup. Except for two runs later in the week in the truck, I’d be essentially “stranded” by the e-bike’s absence. As I sat out there in my old aluminum lawn chair, thinking and looking around, I became hard-pressed to think of how such a thing would be bad. Many desert boondocking areas are just featureless desert scrub. Here, the many mountains, as well as my camp’s view over the salt flats, makes the thought of staying put very nice.

6 thoughts on “A Tired Tire Day”