Archive for the tag “Paulden”

A trail, just like any other trail, only more so. In the middle of 3 days of overcast and variable rain, the skies opened for close to two hours, and I went for a walk in the direction that I had initially rolled in.

Originally intended merely to show the Intrepid in camp, this photo decided to place its own emphasis on something grander, don’t you think?

What strikes me about this trail is that it has signs of long but infrequent use. There’s very little slope to this plateau but, as with all such trails, what there is in the direction of travel causes END_OF_DOCUMENT_TOKEN_TO_BE_REPLACED

While I was airing up the tires, I figured this shot might show that this is cattle country. Most stay contained within fences and cattle guards, while a few strays go all over the place.

While heading for town on a supplies/laundry trip, I decided to do two things: try a partially-different trail route back to Perkinsville Road, and scout for a markedly different campsite in Prescott National Forest, north of Paulden, AZ. The return to Perkinsville was via a sort of loop that wandered across State Trust land, and that trail was easier overall than the forest road trail I’d taken in. The drawback was that I’d have to cross the ditch that I’d chickened out and turned back at on FS638, which required putting on my big boy pants and listening for ground contact while crossing it. I had my door open at a couple of points to check how close I was to grounding out the running board on that side. Made it!

I’d left tire pressures down, since although the newish route was less hazardous to tires, it was still rocky enough to need a softened ride. This allowed faster speeds overall, along with less trauma to the camper, but of course the airing up process at the end takes enough time (35 minutes) to cancel out any speed gain. It’s worth it, though, and after my early experiences with END_OF_DOCUMENT_TOKEN_TO_BE_REPLACED

My son sent me a new sticker for the shop he’s at, and so I stuck it on the Furd. It’s a general supportive thing only, since the shop is in Illinois!

Posts on this blog will be few and far between until the middle of the month, when my cellular data plan rolls over. Just letting you know ahead of time. Nothing’s wrong. I just downloaded a YouTube video at the start of the month, and now I’m doing my penance. Humphrey Bogart movie outtakes. Go figure. It was worth it. 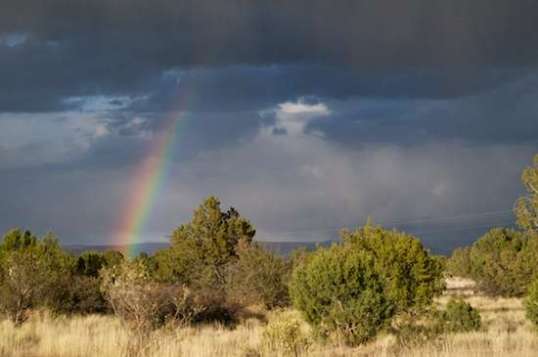 With rain off and on all day yesterday, it finally ended with the sun briefly peeking out near sunset, and this rainbow was the result.

A week from now, Paulden, AZ should begin sailing into the low 90’s for daytime temps. So, I’ll be heading for the higher elevation of END_OF_DOCUMENT_TOKEN_TO_BE_REPLACED

Posted in Daily Life and tagged Paulden | Leave a comment

The Mundane & the Bizarre 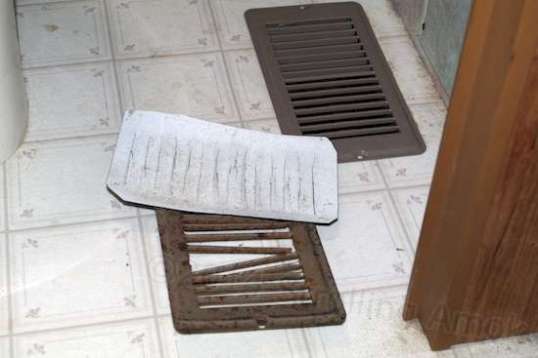 Wow! Floor registers! Spooky! No wait, this is the mundane one…

Well, there comes a time in every man’s life when he must grasp fate by the nape of the neck and laugh at risk. This isn’t one of those times. I just got tired of stepping on a bathroom floor register that was extremely uncomfortable on bare feet. The previous owner had topped the registers with wide magnetic strips to seal them off and cushion the ribs, but this one was now cut through and the other registers were bent. The only place I could find replacements in the unusual 4″x8″ size was Camping World, which requires you to sign up for spam each time you order. Not my fav. But I ordered the replacements at just $6 a pop for three, and they installed no problem. Exciting.

Then there are the Monkey Skulls. END_OF_DOCUMENT_TOKEN_TO_BE_REPLACED

Hard to see, but those white spots are snowflakes! The sleet came later.

Having just come out of a time where I could only walk in the mornings because the afternoons here near Paulden were too sweaty in the hot sun, I was surprised to wake up this morning to the 46-degree temperatures dropping instead of rising. In fact, the consistently light overnight rain changed into moderately heavy snowfall in the 35+ MPH winds as the temperature dropped to 41 degrees. Then up to 44 as the trailer rocked in the wind, then back down to 42.Eventually, the snow began to stick to the Ford for a few moments, but never had a chance on the ground.

Then the heavy, dark overcast broke up to billowy clouds, and temps cruised up to the mid-fifties. That was it, or so I thought. I thought that until noon when END_OF_DOCUMENT_TOKEN_TO_BE_REPLACED

Are We There Yet? 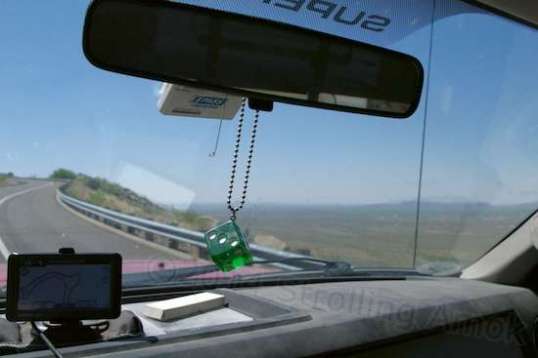 Well, besides highlighting my dusty dashboard, rearview mirror with unlucky die, GPS and expired I-Pass tollway gizmo, the other emphasis here is the rapid climb from Congress toward Prescott, AZ.

Soaking in heat is not my idea of fun times, so as Wickenburg heads toward a high of 89 today, the tiny townette of Paulden, AZ is expected to reach just 79 degrees. It’s the higher altitude. I’m just north of Paulden, parked beside a section of “Old US 89”, a bypassed portion of what is now State Route 89 that runs from Congress to Ash Fork. “What to what?” you ask? From what I can tell, US 89 used to run from Mexico to Canada. Since then, it’s been chopped, abandoned, and incorporated into other highways. Information on my little piece of it is especially hard to come by. But let me start at the beginning of the day’s journey.

As long as the pavement is reasonably smooth (and what isn’t after driving in Illinois?) I find piloting the Defiant toward the next destination to be a pure pleasure. Looka that terrain!

The total distance is around 100 miles and takes about 2.5 hours, in theory. The most direct way to head from Wickenburg to Paulden is to take the short stint on 93 from Wickenburg north to Congress, then just stay on 89 to and through Prescott and points north. Naturally, with the Defiant in tow, I can’t do that – just south of Prescott, 89 turns into a twistfest that takes rigs over 40 feet into nightmare territory. Such vehicles are prohibited, and articulation doesn’t matter. Fitted for intergalactic travel, the Defiant measures END_OF_DOCUMENT_TOKEN_TO_BE_REPLACED