I didn’t mention in my previous post that the Painted Desert Visitor Center at the north end of the park did offer an orientation film about the park, but with time being limited, I passed. I was too excited about actually being at the park anyway. Having seen “stereoscopic” slides of a few petrified logs when I was a kid, I wanted to be inside it. I had expected my “America the Beautiful Interagency Lifetime Senior Pass” to let me through the gate at half price, but I had happily misunderstood the terms. I was admitted at no charge. Being a certified cheapskate, that did my heart good.

The road traversing the park was paved and in fine shape, with posted maximum speeds varying from 35-45 MPH, but towing the trailer over the uneven surface dictated lower speeds. Fortunately, traffic was almost nonexistent, so I wasn’t holding anyone up as I trundled along. Since I had a little time to spare, I couldn’t resist stopping at a few viewpoints or outlooks over the Painted Desert area. 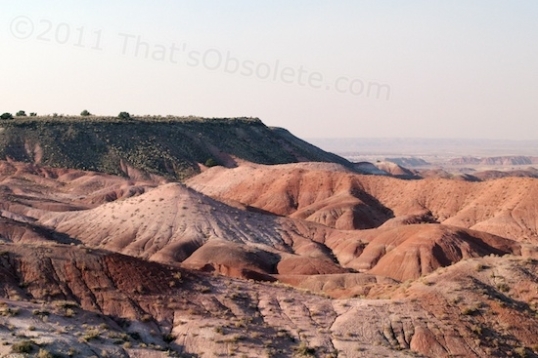 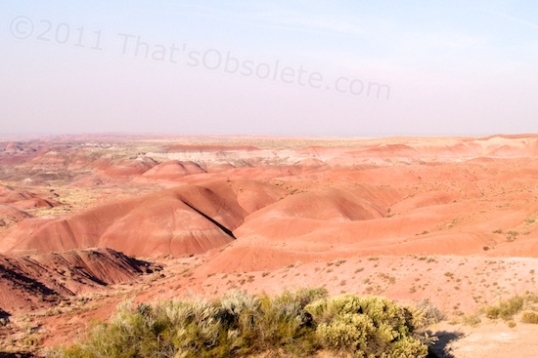 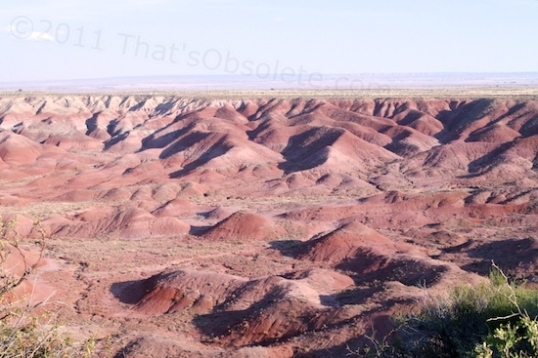 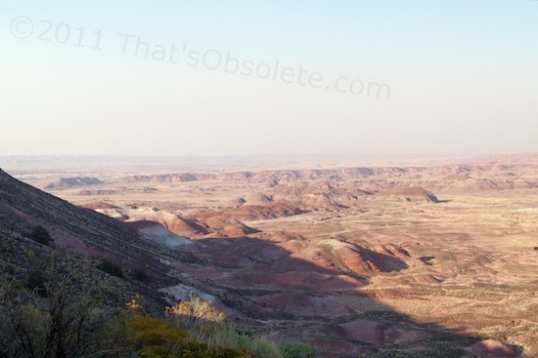 I found that the main road’s outlooks were complemented by several side roads along the way, which led to other viewing areas with distinctly different features. Even without stopping further, the vistas and geological features along the main road itself were awe-inspiring.

The park’s size and variety of features were much bigger than I had mentally pictured, and I realized that it would take me several days to see even the majority of what it offered. The park’s printed guide offered suggestions on what to see if you had one hour, several hours, half a day, and one day or more, but this seemed seriously out of sync with reality. Seriously. Even with a fast car, the stamina of youth, great physical condition and running shoes, there would be no way to gain any real appreciation of the park’s features in half a day.

This wasn’t something to go flying through, like a slideshow. It was to be savored for the experience itself. That became obvious right off the bat. The faster you’d go through it, the less you’d be able to appreciate what it is that you were looking at. You could check it off your bucket list, sure, but that’s about all you’d get out of it. In the rush, you wouldn’t really have seen or experienced it. That would be a shame and a waste, because what is here is nowhere else in the world.

It was time to move on and set up camp. Camping is not allowed inside the park, except for tenting out in the open wilderness areas where walking is the only access. My goal was to find a parking spot at the Crystal Forest Gift Shop, located just outside the South park entrance. When I arrived, the shop was closed, but a large “Free RV Camping” sign and a generous parking area with electrical hookup boxes made me feel less like I was clogging up some poor businessperson’s parking lot. Being a rank newbie with 26′ box behind me, I took my sweet time backing the travel trailer into a spot. I could afford to, since no one else was there and I had the whole thing to myself.

The house batteries were fully charged because of the day’s travel, and I cooked some dinner and settled in for the evening. I might be unable to recharge anything but the house batteries, and had no idea how long the water or waste tanks might hold out, but I was officially boondocking. And, electricity was available if the length of my stay would make it necessary. Or, so I thought.

One thought on “Petrified Forest Arrival”