On Tour: Woodchute to Jerome 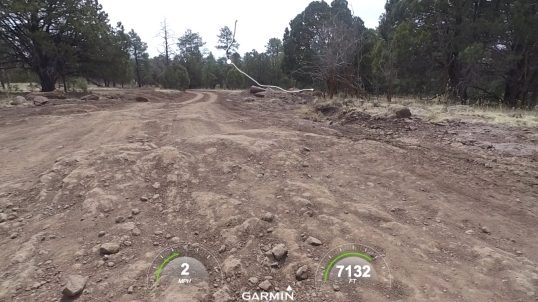 A holiday snap taken by the Garmin VIRB Ultra, which inserted its own default data overlays of speed, elevation and location on a mapped track. And its own logo, of course. These are probably easy to get rid of, just as they are on video captures, but I haven’t explored that yet.

Once you get the video bug, it’s hard to stop seeing what can be done on a budget. The 16-minute video below takes the viewer from my campsite at Woodchute Trail through the eclectic town of Jerome, Arizona. If all you want is to see what driving through Jerome is like, just skip farther in. Should you be considering Woodchute as a potential camping spot, you’ll want to start at the beginning. Basically, anyone in any rig can make it up to the cattle gate, and there are plenty of pull-offs to choose from. Cell reception may be an issue there, however. In this video, you’ll eventually see some travel trailers large and small in this section.

Once past the gate however, your rig should be more compact and have good ground clearance, ’cause it can get pretty bumpy and rutted. 2WD is all that is needed in dry weather, however. The Mighty Furd’s new shocks certainly got a workout on a few parts of it, and you need to know how to pick your path to avoid dropping a wheel into something deep enough to ground out an axle. It’s not difficult at all, but it’s worth mentioning and something to avoid doing in the dark.

As for the mechanics of the video, it was all done with an action cam. Except for a view of the rear suspension taken by mounting the camera on the cargo box’s hitch stalk, all of the footage was taken from the front of the Hollywood e-bike rack. This presents a much clearer view than behind the windshield, what with sun glare and the bike itself obscuring the picture from inside the cab. The drawback is that hanging so far out front of the axle makes it appear as though I’m veering toward the outside on most turns. There’s also tire whine and the engine noise of course. One oddity is that although wind roar is not an issue as I would expect, some kind of airflow or automatic volume control issue alters the sound capture at speed. Toward the end of the video, you can see a black cord obscuring the view ahead. That’s the Aurora’s cable lock drooping down from the vibration. Oops. One more thing for me to keep in mind on future setups.

The rear suspension shot indicates that, unlike the front mount, the camera is moving relative to the chassis. That movement is due to the cargo box stalk that slides into the Ford’s hitch receiver. My StowAway box is loaded to within an inch of its life, and the common clamp-type “hitch tightener” that StowAway offers isn’t cutting it. At least it doesn’t rattle, which is its true job. I’ll have to try mounting the camera right on the hitch receiver in the future. The Hollywood rack doesn’t present that problem because of the lighter load and the sophisticated mechanism they use to tighten things up. StowAway can’t do that unless they completely redesign their mount – and add a lot of cost. It’s not really worth it for the great majority of customers.

All trail footage was captured with stabilization turned off, so for once you can get some idea of what the ride is actually like. Pavement footage used stabilization, as is usual.

As I explore what my video setup can do, I’m rightly guessing that the one thing that I won’t wind up doing is storytelling. You know, me talking on camera a lot and yapping over whatever it is I shot. With the exception of my occasionally highlighting or demonstrating products that I’ve come to use and like…or not like, I generally don’t have anything to say just for the sake of filling out the soundtrack of a video. And I don’t think you need to hear, “Ow, that was a good bump there…” or fretting about tire sidewalls or the effect of prolonged idling on the engine.

My generic interest is more in showing what various trails and campsites are like, so that you can decide whether that location is A] scenic enough for you, and B] worth the potential pain to get to. After all, whenever I have the opportunity, I prefer sites that the majority of campers wouldn’t be willing to hazard. Google Maps satellite view hints at difficulty, but doesn’t come close to matching seeing the trail for yourself, or reading a description written by someone who’s been there with a particular kind of rig. Were I to do nothing but stick with the easy, heavily-used campgrounds, I wouldn’t have bothered getting into video, because there are enough “subscribe to my channel!!!” celebrities pumping out nonstop footage of themselves already. Now, some do a pretty decent job of it, but what would be the point of my duplicating that? Once “The Commute” begins in earnest, don’t expect much in the way of videos. As with Woodchute Trailhead here, I’m not a stickler for sites requiring 4WD. I’m not a sport 4-wheeler by any stretch. Solitude is my thing, but not getting out there so far that towns offering resupply are not available or reasonably convenient. Simply capturing footage adds a surprising amount of time to any trip, but hopefully, the videos that I do present will be useful to you in some way. That’s the goal.

View fullscreen, if you can. It’s worth it.

One thought on “On Tour: Woodchute to Jerome”