Airing back up after a rough trail has just gotten a lot faster, more convenient, and more accurate.

I’ve mentioned this product before, but it’s worth reviewing again for anyone who airs down tires more than occasionally. This post is more video-centric, but you can get more product details here. Most four-wheelers (day-trip rough trail enthusiasts) approach readjusting tire pressures like many campers approach basic no-frills overnighting. They rough it, and enjoy jettisoning convenience. They poke something/anything into the tire valves to let air out, and periodically check pressure with a pocket tire gauge. Then to air back up at the end of the trail, they monitor the built-in gauge on their favorite air pump. Since their vehicles are light and typically use tires that max out at 36 or so PSI, neither process takes very long and does not require a Herculean pump.

Upscale overlanders speed up the airing down process with ARB’s “E-Z Tire Deflator Kit”, a specialty device with needle gauge that is used to unscrew the tire valve for very fast deflation. Me, I use Coyote Automatic Tire Deflators to air down, which take longer but require no monitoring. They stop at whatever pressure you’ve pre-adjusted them for, which is very handy for low-profile, high-pressure tires where you’re more likely to use just one low pressure for every trail surface instead of decreasing pressures by 10% for this surface, and 20% for that one. Stiff-sidewall, low-profile tires do not benefit from airing down nearly as much as old-style, taller tires. Their contact patch just can’t elongate all that much. By the time you’ve gotten all four Coyote deflators on and waited a minute, it’s past time to start removing them.

The E-rated tires on the Mighty Furd require a minimum pressure of 65 PSI to support their rated load without risk of overheating on the highway, so airing back up can involve pump runtimes that may well well cause many of the lighter duty ones to shut down early in order to protect themselves from damage. That means waiting at least a half-hour to allow them to cool down a bit. So the better ones are rated with what’s called a duty cycle, which is the percentage of time that they can be expected to run continuously at some given pressure. That may be 33%, 100%, or anywhere in between. The remainder of that percentage is expected to be a cool-down rest period. Abuse that, and you risk damaging a pretty expensive pump.

There were many options for air pumps when I researched them, and I had to take any user comments with a grain of salt, since the vast majority are doing comparatively short, low-pressure fills that don’t take much time. My main internal debate was whether to go with a robust fill rate having a limited duty cycle, or a slower fill having a 100% duty cycle. The former choice costs more and has an epic electrical draw from the vehicle’s electrical system. Having no hands-on experience with anything other than cheap auto parts store pumps that melt their power plugs and bake their own rubber air hoses to become as brittle as glass, I opted for a 100% duty cycle pump that would draw less power. This was purely a personal choice, nothing more. I figured it would be more annoying for me to have to stop somewhere within the process to sit and wait for cool down, than it would be to suffer with a longer fill time. I was also a bit apprehensive about whacking my rig’s electrical system with such high amp draws, but that rates as more of a voodoo science concern than anything else. 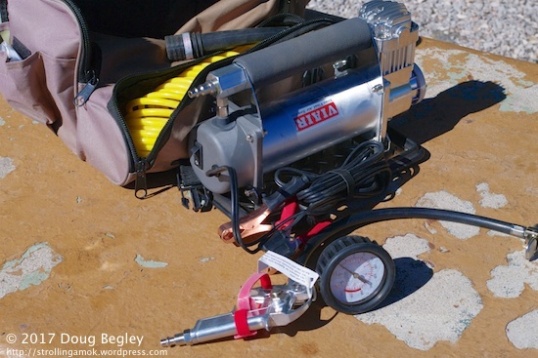 The portable Viair pump kit with its standard gauged air chuck. Its carry bag is quite heavy-duty, and includes a couple of pockets for its spare air filters and my Coyote deflators.

The traditional no-nonsense air pump solution is some form of Australian ARB pump, all of which have earned a bulletproof reputation in the overlanding and four-wheeling markets. Until recently. They offer a twin-pump kit that makes airing up a quick affair, but it also appeared that they had recently shifted production to China, with predictable results. With an MSRP at an incredible $900 at that time, it wasn’t like I was going to be able to buy one, but it threw a flag as to the rest of their lineup. Sourcing of their lesser single-pump models was uncertain, with many recent complaints there as well. So I opted for a Viair pump, all of which have a good reputation as reliable value for money. They lack the historic, outback romance of ARB pumps, but I’m not into that on many kinds of products. When it’s just me out in the middle of nowhere, my priority is for this kind of thing is reliability.

That’s why it irked me when my Viair’s standard air chuck began giving me wonky air pressure readings during the air-up process, which made things very time-consuming and tedious. This is not something you want when you’re about to hit the pavement again and are getting antsy about being on about your way. With the pump I selected, it takes long enough, without adding in a regime of removing the chuck and reapplying it repeatedly just so you can check how far along you are.  The 9-minute video below is merely showing the ARB Digital Tire Inflator in use. The downside of any digital thingy is that it relies on batteries to keep it rolling, but this is not a show-stopper because I keep spares available. It’s bad that I had to replace the original Viair chuck, but at least the ARB chuck functions as advertised and corrects the problem that made airing up a tedious ordeal. My only real caution should you want to buy a 12V air pump for such use: avoid any pump that is powered off of a cigar plug. Those connectors are not made to carry even mildly moderate loads, and their resulting heat can damage your vehicle’s socket. Use only pumps which use battery clamps.