No cramped quarters here! I’m over where the ground is most level.

Weird name for a campground, eh? Well, Wikipedia says that “Joseph Richard ‘Joe’ Skeen was a conservative Republican congressman from southern New Mexico. He served for eleven terms in the United States House of Representatives between 1981 and 2003.” So now it makes sense, if this is who they named it after. This campground is at the eastern edge of El Malpais National Conservation Area.

The drive down was through some classical New Mexico terrain, what with its long hills, buttes, and great vistas to tempt you out of your lane as you gawk. I especially like how some buttes are rimmed with a solid topping of rock that has since split into gigantic boulders that eventually lose their support and drop a ways down.

At first blush, this campground is great. It has 10 camping spots, each with a covered picnic table and waist-level grill. Mine also has a ground-level grill to boot. As a BLM-run camp, one can stay here 7 days, and can then hang out elsewhere in the El Malpais for another 7 days in a month. For me, this is starting to get back to desert conditions, with scrub bushes, thorny plants, and some grass. The soil is a blend of sand and fine dirt. You enter at the south end on a slowly disintegrating paved road (the entrance is well-marked) and head north to a large flat loop. Nearly all of the spots are generously sized and spaced apart. There’s no solitude here, nor much privacy when you venture out, but the distances compensate. The camp is located on a slope, and with me being at the north end where the Verizon signal is 2 of 4 bars, I’m high over the passing highway yet can’t see it due to the vegetation. The elevation at my site is 6,952′. 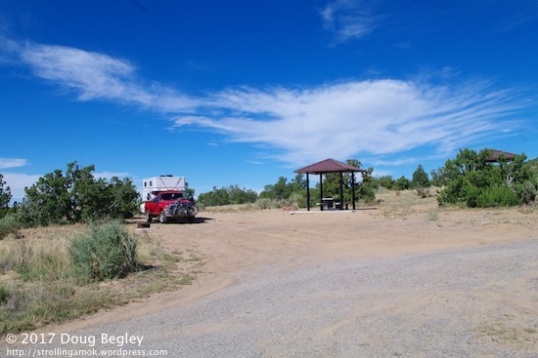 See? A shelter too!

Should you decide to visit this fairly busy campground (I arrived midweek in mid-October), you may prefer to roll in prior to 3 PM to ensure a space. Other than a couple of vault toilets with trash receptacles – one of which I’m purposely very close to – there are no amenities here. There is reputed to be potable water at a ranger station just two miles north of here, but that is a container-fill only, with a 5 gallon per day limit. No hose hookup. Having declined to pack my ladder on this voyage, I have no practical means of filling the Intrepid’s water tank from a container. Doesn’t much matter, the towns of Grants and Milan being just 12 or so miles north, and I’ve already found all the supply sources I expect to need once I leave here in a week.

Until that time, I’ll have to find a way to adapt to a forecast solid week of sunny skies and high temperatures ranging from 65-75 degrees, the only “oddity” here being a much greater daily temperature range than balmy Bernalillo. Here, it’s a 35-40 degree (or more) daily swing, which is typical of deserts. Cold nights, warm days. One’s dress varies with what time one ventures out of their mobile hovel. At the moment, I’m listening to someone (I think it’s the camp host) playing a trumpet. It’s a little rough, but I recognized “You’re in the Army Now”, the theme from the movie The Godfather, and a couple of Christmas songs. Louis Armstrong, Dizzy Gillespie or Wynton Marsalis he’s not, but he’s down at the other end of the loop. It’s impressive how far and how clearly the sound carries, though. Practice makes perfect. If anything, it’s a reminder of why the US Army cavalry of old used trumpets to signal orders. It works! Chaaaaarge!

One thought on “The Joe Skeen Campground”