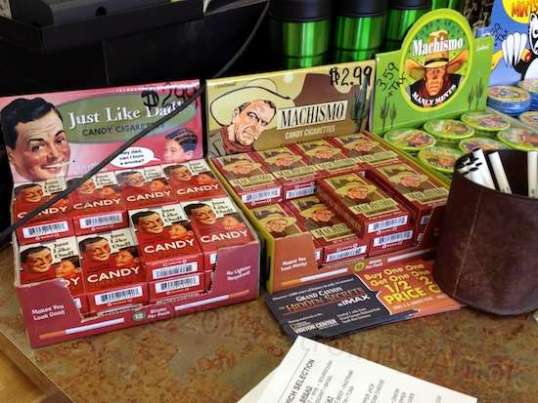 I was astounded to find these in the sandwich shop – candy cigarettes! “Makes you look cool! No lighter required! Hey dad, can I bum a smoke?” And the Maschismo brand says, “Makes you look manly!” On the right, Machismo also offers “Manly Mints”. At $2.99 per 12-pack, that puts these on a cost par with the real thing! I’d assumed these died out in the 1960s, but though beaten down, I guess Politically Incorrect never dies.

You know, I’ve only been on the road since 2012 and, now that I’ve had to repeat stops, it’s time to point out that not each place I camp in is nirvana on earth. Tusayan, Arizona is one of my favorite places to be. It has its strengths and it has its weaknesses, but they are unusual in that each is toward the end of the scale when compared to many places. Whether the plusses outweigh the minuses is up to how you roll. 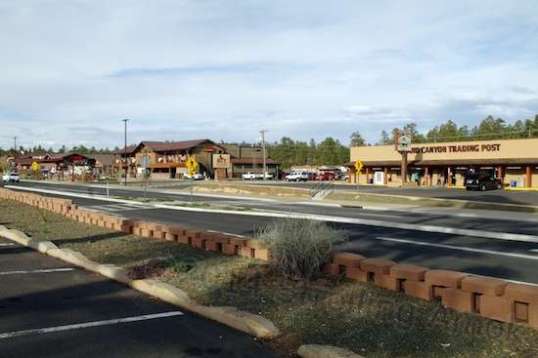 Part of the strip that is Tusayan.

Tusayan is one four-lane quarter-mile commercial strip which is a mile or so south of the Grand Canyon National Park entrance on this side. The town caters to tourists who drive and fly in to visit the Grand Canyon’s south rim, and tours are available by

fixed wing, helos, train, and converted pickups and Jeeps. Most visitors have no place to stay, so the majority of that strip is taken up with motels, mostly all big and expensive ones. The humble little 7 Mile Lodge rents rooms for $100 a night, while the big boys exceed $200. In my world of course, anything over $28 has some ‘splainin’ to do. There’s a couple of purported steakhouses, a couple of Mexican restaurants, alleged “Asian”, a sandwich and espresso joint, a smattering of motel restaurants, a trading post (tourist trivia) and general store, which adds a canned and bagged food market and post office services when they feel like it. And there’s a Pizza Hut of sorts, a Wendy’s and a McDonalds. A Texaco in town serves up gas and diesel. An impressive National Geographic building hawks passes, maps, an iMax movie and area tours. Handy Tip: if you enjoy really good espresso and don’t mind paying a couple of bucks for a small shot, don’t bother going to the espresso/gifts/sandwiches shack in town. I managed to get it down, and that pretty much ends the complement.

Nothing is cheap in town, since here and in the Canyon, this is not on the way to anywhere else. Tusayan is a good 50 miles north of Williams, which is on the way to somewhere else. It’s kind of like a micro version of Alaska. Note that a free shuttle bus is available “in season” to go right into the Park, assuming that you have a Park pass of some sort – also available in town. As a bonafide codger now, I have an America the Beautiful Pass, which cost all of $10 and is good for life, such as that may be defined or measured. Flash that at the entrance to National Parks, and you are waved in and thanked. Considering the normal cost of entry, it feels like you’re getting away with something, which you are. Must have something vaguely to do with one’s past relationship with the IRS. 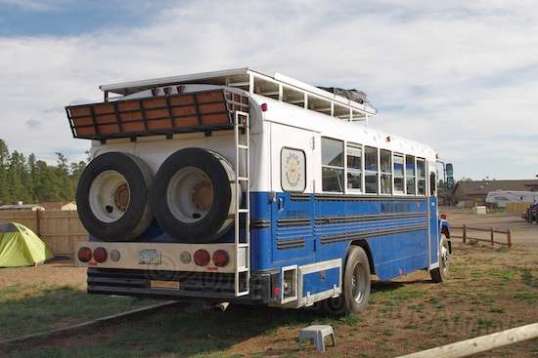 This bus got my attention in the RV park, sitting in the group tenting area. That’s a storage and viewing platform on top. How’d you like to lift one of those tires up into position?

So, if you’ve saved up your pennies and the Grand Canyon is on your bucket list, either Tusayan or the facilities in the Grand Canyon itself are aimed right for you. You may not walk out with much in your pockets, but given the compressed time available to you, it’ll all be worth it. For campers on a budget looking for full support facilities like hardware stores and repair places, this isn’t it. The town is not at all built around camping support. There is no UPS or FedEx station anywhere around, either. They are friendly here, but aren’t after us nickel-and-dimers. They desire international travelers who want to experience the most magnificent sights in the United States, within the time that they have available. 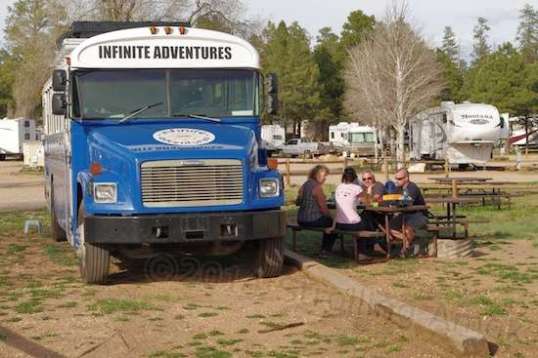 They are one of several outfits offering visitors extended camping tours all across North America.

The RV park in town charges $29 to tent, and $46 to RV on a partial hookup in season. A dump site is available ($6 for non-guests), as are coin-operated showers ($2 for 8 minutes) and 3-machine laundry. Both are decent – I made a tour. Propane refills are a tad over twice the going rate per gallon. Not the glamor capital of parkdom, but nothing else commercial this close outside the Park exists. They generally get all the folks who could not book a site inside the Park. Reviews are mixed, but they generally rate it as pricey and mediocre. It’s dirt, not all sites are level side-to-side, and it’s cozy, but I’ve seen much, much worse. Oh yes.

In general, coming up here to boondock in a small rig gets you a plethora of 2-week spots in the Kaibab forest. Large, low-clearance rigs such as the Defiant are problematic, just like on most other National Forest trails. You can find a spot, but you’ll have to work at it. The reward for doing so is a beautiful forested site within a reasonable distance of town, complete with the stir of wind blowing through the pine treetops and plenty of singing birds, walking trails and solitude. That said, anywhere south of town is preferred since east of town offers a train of very low flyovers of tour helicopters all day. West of town offers free sounds of the runway at some distance from 6 AM onward. Options further away westward in my area are only possible with a very small, high-clearance rig. I have not yet checked out the assortment of trails south of town and further east. A few low-cost NF boondocking campsites are in the area at some distance away eastward, like Ten-X. The cost appears to be $9, and the NF302 dirt road to get there looks exemplary along the distance that I did go. 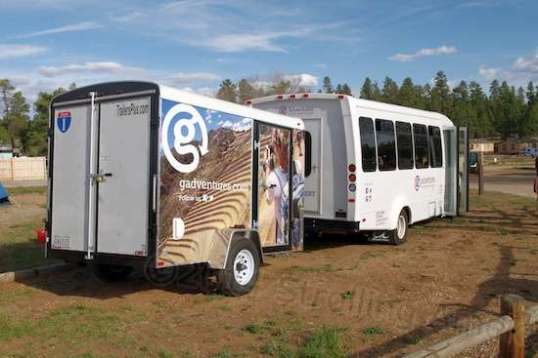 This one was full of young adults preparing to tent overnight. The temperature would bottom out at about 40, which is great sleeping in a halfway-decent bag.

So if you come up here lacking the wealth to camp within the Grand Canyon Park itself, other options exist for those unafraid to explore the surrounding area. Before coming in, you may wish to come in well-stocked in everything. When you need groceries which lean toward healthier produce and exotic-for-here food brands normally seen only in Europe, or you want to take advantage of the free dump station or coin-op laundry at Mather RV Park, drive past Tusayan and into the Grand Canyon itself. The G.C. Village is a pleasurable treat, offering a real Post Office and a good deli and grocery store that also offers some camping equipment and clothing. I got my Victorinox utility knife there last year, suitably marked with a gimmicky Grand Canyon logo that hasn’t worn off yet. I’ve owned other brands, which are hazardous crap in comparison. (Another Handy Tip: If you want to set a trap for a ne’er-do-well in your vicinity, simply leave a Husky utility knife out in the open, along with a can of baked beans or a superglued tin marked “cash”. Then simply follow the blood trail back to his lair.) Anyway, once you’re in the Village parking area, it’s also a short walk to the rim for a wonderful view. 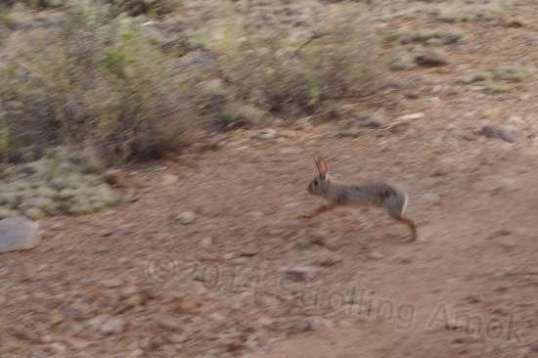 Bunny! This was one of a pair that were not real concerned about humans stumbling about.

Unless you are coming in specifically for the Park itself and the cool weather, and have the pass needed to get to the Village and rim of the Canyon, Tusayan becomes a rather noisy and expensive camping dead end that will cost you in travel time and fuel. I’m glad I’m here, but that’s because I have that pass and intend to use it as the bonus to camping in beautiful wooded terrain. Got pass: enjoy. No got pass: bypass.