Yep, them is hills made of – or at least coated with – lots of cinders. Lots.

Cinder Hill OHV (Off-Highway Vehicle) Area is an interesting place. I innately read that as Overhead Valve, but that’s my problem. About 12 miles north of Flagstaff, it consists of some 13,500 acres of flats and hills coated with several inches of small cinders. The entrance from US-89 is well-marked but has no turning lane, so it’s prudent to use an early turn signal and keep an eye on your rig’s tail as you slow down. No camping is allowed on the first mile or so of the NF-776 access road, but signage as to where you can and where you can’t camp is obvious. The first area is adjoining a very large, flat span of deep cinders among many ponderosa pines. It is sizable, and decent privacy can easily be found.

Half a mile away from camp presents a view that isn’t available when you’re nearer the trees.

On the weekdays, you might find just half a dozen camping rigs parked among the trees, while weekends will produce some more toyhaulers and trailers loaded with ATVs and motorcycles. I hadn’t noticed that my arrival on a Thursday was going to be on a long Memorial Day weekend, and it got pretty busy! My past experiences covering vintage automotive performance events made the engine noise seem almost comforting however, while the late-night partying didn’t. It wasn’t too bad, though.

What was more vexing was the prodigious amount of dust churned into the air, and I was most fortunate to avoid most of it due to my camp location and wind direction. Since my ailing battery pack demanded maximum sun exposure, I satisfied that by parking on the border between pervasive tree cover and the main flat where ATVers young and old did their best imitations of Mad Max-style high-speed runs to get to trails in the surrounding hills. Camping choices are plentiful along NF-776 as it continues up a grade, and the only things to consider are wind direction (for dust from passersby on the road) and solar exposure or shade, your choice. 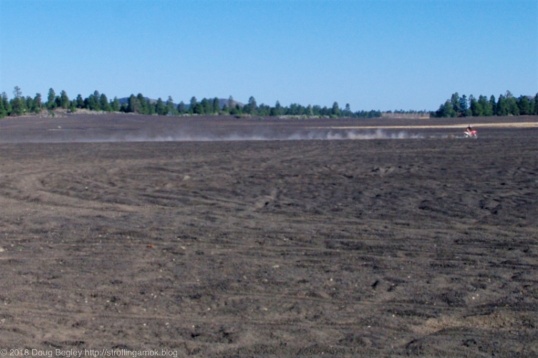 If there’s one thing the motorcyclists love, it’s rocketing along the flats.

I was initially concerned about taking the heavy Intrepid over the deep wavelets of cinders, but this proved to be no problem at all in 2WD. That said, I’d still advise caution on two fronts, one being that cinder depth can vary greatly. Combine that with an incline and lightly-loaded drive wheels, and you could have a situation. By sticking to flat areas where pathways had packed down somewhat, several fifth-wheels and bumper-pulls made it in without any problem at all. Some areas on the other side of the road posed much more challenging situations, however. The second caution is that I don’t know how rain affects the tractive nature of the cinders. If it acts as a lubricant, it may become easier to sink in. Bonus caution: arriving in the dark is risky if you explore the area in between the trees and the flat, where I am. That’s because ATVers have made several very deep circular dishes in the black cinders, and it would be all too easy to dive or topple into one. You can’t avoid what you can’t see.

Driving over them makes for an interesting hissing sound as they try to squirm out from under the tires, and I imagine that the extra power needed to push through must have overheated one or two ATVs over the years. Walking on them produces a pea gravel crunch that’s like listening to the soundtrack of a murder mystery show, where someone is walking on the gravel drive of a British manor house. Crunch, crunch, crunch. This absorbs enough extra energy that you’ll find yourself preferring to find a suitable tireprint to follow. The other thing such walking produces is fine dust wafting all over your shoes and lower extremities. By the time you get back to your rig, it’s time to consider just what mixture of dust and cinders you want to bring in with you, if any. You always have the choice of walking along the road instead, which is an easier go. On a holiday weekend however, the clouds of dust from passing vehicles makes that option unpleasant. 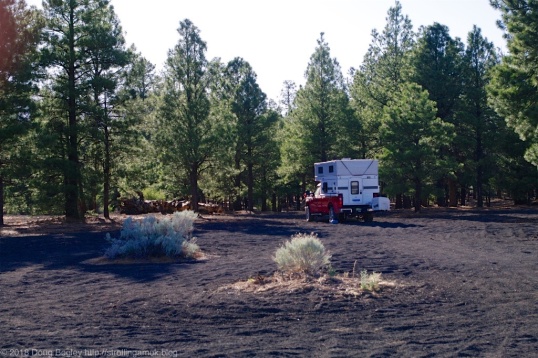 Camp. You can nestle right in under the trees for an exquisite shade, or freestand out there for enough sun to fully charge just about anything. Look ma, no ground panels!

I tried out the e-bike one day, which didn’t work out. It’s 2”-wide tires are predictably hopeless in the deep cinders, so I pushed it to the gravel road just in time to intercept the dust from more than half a dozen vehicles. Two asides here: first, in my travels, it seems apparent that one can tell the difference between traveling boondockers and local weekenders by the way they pass you on a gravel road. Boondockers usually slow down on approach, and do not resume speed until they are past. This is a courtesy to keep down the plume of dust. Weekenders don’t bother. Take from that what you will. The second aside is that the local bike shop got my Serfas Drifter City tire and Specialized Desert Protection tube, and saved me the effort of installing same for the paltry charge of $5. I had them discard the barrier strip between the tire and tube as well, since the sharp corners at the ends can also wear through the tube, defeating its purpose. I’m still trying to figure out why these urban pavement tires work on shallow cinders, sand and gravel slightly better than the knobby Michelin Dry Country 2 tires they replaced. A mystery for the ages.

Cinder Hill is one of those places that’s very pleasant when it’s deserted, and not so much when it’s busy. I’ll likely be venturing out today to head back to NF-535 south of Flagstaff, to see whether the holiday clog has left my Preferred Full Sun Campsite #2 open. Being some 5 miles in, it’s possible.