The young man of this couple was playing the harmonica outside of a truck stop in Tucumcari, New Mexico. I found this example of busking to be deeply disturbing, principally because I’ve had a small blues harmonica for many years, and can’t play it worth the spit I put into it. He was playing his great. Dang.

The dinosuar museum in Tucumcari that I’d hoped to visit is closed on Mondays, so I pressed onward for Kansas. Route 54 is the best and quickest way to get to Meade, Kansas, and along the way, the terrain change was interesting. It cuts through the corner of upper Texas, and the other thing besides the 75 MPH speed limit on a two-lane road that was notable was the utter flatness of the terrain. Talk about big sky! You can see as far as the atmospherics allow. Ranch entrances were here and there, but no ranch houses were in sight. Texas-sized ranch acreage, I guess. There’s some kind of weird vibe in such rural areas of Texas, something which mixes freedom with personal responsibility, and it’s pervasive.  If there’s some kind of trouble, you’ll have to deal with it yourself, which is much more a call for the positive traits of self-reliance and level-headedness than anything else.

The Oklahoma panhandle didn’t last long as I cut up through it heading northeast. I could only note that it wasn’t quite so flat, that 54 went to four divided lanes, and that some sections of it were in pretty rough shape. Unlike Tucumcari and similar towns that have been hit hard economically, most of the towns further up looked to be fairly prosperous, with few dead businesses along the main drags.

Then Kansas. I saw no state line sign, and it figured since, apart from smooth roads, it was identical to Oklahoma. Just set the Furd on cruise, and go. The main tourist attraction in Meade is the Dalton Gang Hideout and Museum. Seems like one of them had a relative up here. The hideout part goes largely on legend, since a hideout is no good if it doesn’t stay a secret. I may stay here a day and check it out, since this city park is so pleasant. 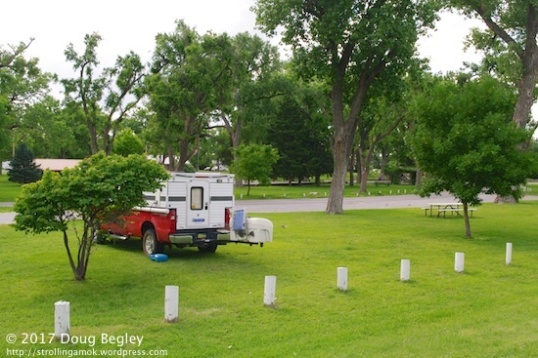