Fire on Mingus Mountain! It’s a controlled burn, of course.

Well, it began to get just too cold on Mingus, so I repaired down to the area just south of Cottonwood, along the same spur where I’d camped before. But this time, I found a lone pull-off at the beginning of the road and managed to avoid the mass of RVers clustered together in the two main camping areas. 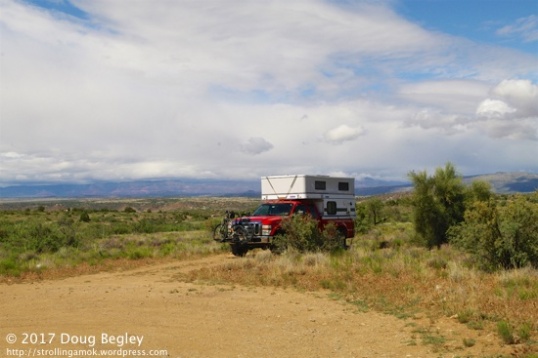 It’s not quite as lonesome as I’ve made it seem here, but nobody was close, so it was quiet.

Being lower in elevation, Cottonwood was experiencing highs of about 70 degrees, so life was pretty good up until Thursday, when a heat wave moved back in. But it was all for naught, since Thursday was departure day for Flagstaff  and the Overland Expo West at Tuthill County Park, back up at 7,000 feet. After another welcome shower and resupply, the drive took only an hour. In one of the episodes of my life that I can count on one hand, I was actually going to arrive 20 minutes before the event check-in gate opened at 1 PM, so I decided what the heck, why not stop for lunch? Surely I’d be one of three early arrivals, and I’d still have the pick of the litter for campsites, no? I stopped at the Mountainaire Tavern for a beverage and a very nice fish sandwich with unusual fries which were very good. Thus fortified, I eased in at 2 PM and found a modest lineup waiting to gain entry. All holders of weekend camping passes, we were shuffled off to the dispersed camping area at the extreme north of the park.

The dispersed camping area was already stuffed to the gills, and I found that beggars couldn’t be choosers for what was left. Vehicles and tents were jammed in all over the place. I steered the Queen Mary tight between two trees, a spot that was not real level but hey, it was an open slot. A bored black lab with a too-long leash next door wandered over to greet me as I set up camp. So, I was able to properly complete setting up with dog slobber on my hands. All the trees nicely block the sun overhead, so out came the ground panels, but since there is no clear spot within a reasonable distance, it’s more of a symbolic effort than a solution. Hopefully, no one will trip over or walk over them in the dark. I will need every watt I can get if I hope to keep the fridge running over four days.

We’re in the horse stable area, and the several long buildings make me wonder just how much horse traffic this place normally gets. Off to the right are the stables, and off to the left a positive mass of humanity.

The Expo has closed and taken over the equestrian area for the weekend, and I must say, what a mob of campers/overlanders of all stripes there are. It’s not much different than an RV park, but with less space. Blaring music, loud conversations, etc, the only difference being that it’s a young crowd at this event, not creaking oldsters like myself. One complication that I found is that there’s no dump station here and no suitable place to dump waste water of any kind. Thus spending four nights here should be a technical challenge, not just for keeping the batteries up, but for minimizing water usage, since the 5-gallon sinkwater waste tank must last the entire time before I cart it out with me. I do not use paper plates and plastic utensils, since that just transfers the disposal problem from dishwater to trash disposal, which is normally more problematic. Shoulda realized that change in scenario, since dumpsters abound here. Oh well. Unpleasant as it may be to mention, dumping urine tanks into the temporary Porta-Potties is prohibited, but when push comes to shove, I’ll at least have the ability to offload any excess into a couple of one-gallon water bottles I saved. In the meantime, I’m hiking to the Portas whenever possible. I gots a flashlight, but I can tell ya, in the middle of the night, it ain’t happening.

The check-in tent is down there somewhere.

Don’t look for “event coverage” as I’ve approximated in the past. There’s an overwhelming schedule of events in different areas of the park, and it’s far too much to keep track of, over too much acreage. Heck, the hike to the check-in area alone was 3/4 of a mile one way, so I’ll be breaking out the Mighty Evelo, assuming that I can do what I need to without having to recharge its battery. They have a slow shuttle of some kind as a fallback, but I expect that to resemble a passenger train in India, with people hanging off the roof. To add insult to injury, the Pentax is once again acting up, so snapping photos may become a problem.

The plan was to hang out near Flagstaff after the Expo, but this event is lucky enough to have a heat wave that will end after the last day. After that, it’s back to the pronounced cold, so we’ll see how that goes! In the meantime, I’m going to try to enjoy this thing without burning myself out or wearing from the constant noise. Sometimes, it’s tough to be picky.