[The following video in this post weighs in with a runtime of 8:21, so those on limited cellular data plans may prefer to not click on it in order to save their bandwidth for higher things.]

On the last day of the Expo, Land Rover opened up their test track to other vehicles, and three remarkable rigs showed up to take advantage of the opportunity. One was some kind of huge, ex-military truck, one was the little Pinzgauer (also ex-military), and one was an Earth Roamer XV-LT, a model no longer in production. (The XV-LTS “luxury expedition vehicle” that replaced it boasts 1,200 watts of solar, a 90-gallon freshwater tank, and a maximum range of 900 miles. It also carries a battery pack rated at about 1,000 amp hours capacity. Yow.)  This is the rig that starts at some $438,000 and change, being based on a highly modified Ford F-550 chassis. Due to its personalized license plates, I am convinced that this particular Earth Roamer is owned by the president of the company. Who was actually behind the wheel at the track, I do not know.

You’ll notice a few things about the footage. First is that each vehicle tends to stop and start, and even reverse at times. This is done as tires leave the ground, locking differentials are engaged, or for various and sundry reasons. Some parts of the video have been sped up to twice their normal pace. This stands out for END_OF_DOCUMENT_TOKEN_TO_BE_REPLACED

It must be nice to have the means to support a Unimog 4×4, in a way. I wouldn’t want one, but I still think they’re slick.

Opps! Hit the wrong button! Oh well. Enjoy!! This post is much more pictures than text, so let’s get at it! –

This Oregon Trail’R was one of many teardrop trailer variants. This one trades artistic integrity for utility. Trail-friendly, roof rack for holding an awning, solar panels, or what have you. 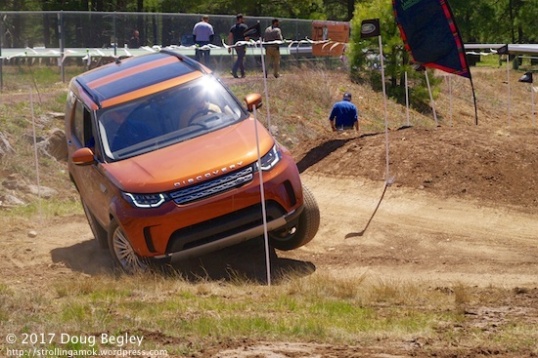 Land Rover debuted their reimagined Defender from a legendary boxy fossil to a thoroughly modern SUV compromised enough to appeal to the Starbucks-slurping crowd. Despite a very sophisticated and capable 4WD drivetrain, forward progress is in the eye of the beholder. (This example is not actually tipping, it’s simply revealing its street car design priority.)

END_OF_DOCUMENT_TOKEN_TO_BE_REPLACED

Lots of couples, lots of kids. The Expo was popular, to say the least.

[Caution for those having limited cellular data plans: there are many (small) photos in this post below, so you may want to stop loading this page right now before your Internet provider slides you into the $15/Gig penalty box for overage. Text usually comes through first.]

At its new venue at the Fort Tuthill County Park, the Overland Expo West went from being hopelessly jammed in camping arrangements to being merely crowded. The dispersed camping area was not suited to especially tall or long rigs, and signups for weekend camping passes were restricted to this end. The display space was sprawling and had the raw space available for more, if need be in future years. I was surprised that Crux Offroad (an aluminum bridge/traction device maker) was not there, but each vendor has to make their own decision as to whether displaying at the show is worth the effort and expense. Nonetheless, a wide variety of rig and accessory outfits and individuals  showed up and showed off.

My hero! Adventure TV series producer, author, videographer and all ’round nice guy Mr. Andrew St. Pierre White hung out for awhile at the BF Goodrich trailer, since they sponsor him and always display at the Expo. I asked him a practical question about signing up for one of his online video-making classes, which dwell on techniques and why, instead of being software instructions. I also suggested that he invoice the Coca-Cola company for product placement, since he’s addicted to it and it shows in his pieces. He began to respond painfully, “I afraid I don’t represent their demographic…” before he looked at his giggling young daughter and pointed at her saying, “…but YOU do!” She seemed delighted to possibly become Daddy’s Little Income Stream, jumping up and down.

I’ll show a mass of pictures below, which are pretty much self-explanatory. Three occurrences worthy of mention are not shown.

Overlanding videos ranging from shorts to one hour ran all day, every day in the “Theater”, which was a re-purposed auditorium with folding chairs. The fare varied from END_OF_DOCUMENT_TOKEN_TO_BE_REPLACED 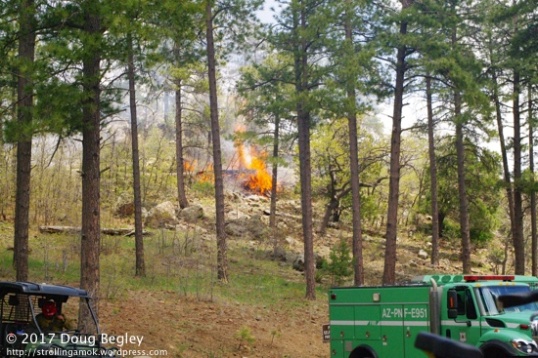 Fire on Mingus Mountain! It’s a controlled burn, of course.

Well, it began to get just too cold on Mingus, so I repaired down to the area just south of Cottonwood, along the same spur where I’d camped before. But this time, I found a lone pull-off at the beginning of the road and managed to avoid the mass of RVers clustered together in the two main camping areas.

It’s not quite as lonesome as I’ve made it seem here, but nobody was close, so it was quiet.

Being lower in elevation, Cottonwood was experiencing highs of about 70 degrees, so life was pretty good up until Thursday, when a heat wave moved back in. But it was all for naught, since Thursday was END_OF_DOCUMENT_TOKEN_TO_BE_REPLACED