The light tower at the Aviation Heritage Museum.

This day started off close by at the little Grants-Milan Airport in Milan. The technoids at the Cibola County Historical Society decided to rig up a display of some of the key equipment used to guide cross-country flights in 1930-ish. Ford Tri-motor passenger planes were the dominant carrier at the time, and when one of them went into a mountain, it showed that some improvements were needed. Such flights were made by eye, not by nonexistent instruments. Markers in the form of large arrows were were laid on the ground at the time and this website gives more detail than I can. The buildings are open on Saturday mornings, and someone is there then to explain everything. Too bad this is Friday. In the meantime, looka da pikturs. 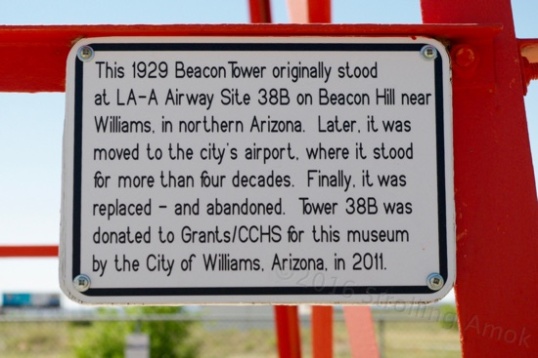 The generator shed needed to power the light. 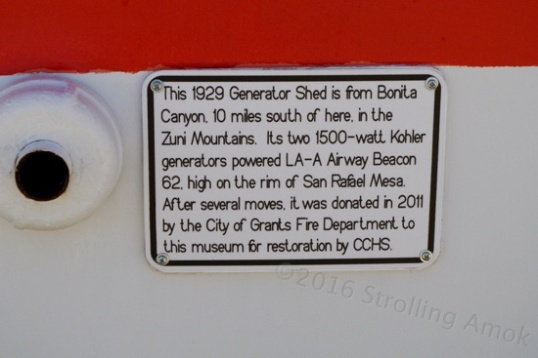 During the day, a series of arrows on the ground worked fine, unless weather was bad.

The weather vane atop the station.

This event pointed out that good enough wasn’t good enough after all, in a thunderstorm. You can scoff of course, but even today, traffic lights usually don’t go up until accidents occur to point out the need.

A sort of specifications diagram for the light tower. Not cheap, and they needed lots of them along certain stretches. 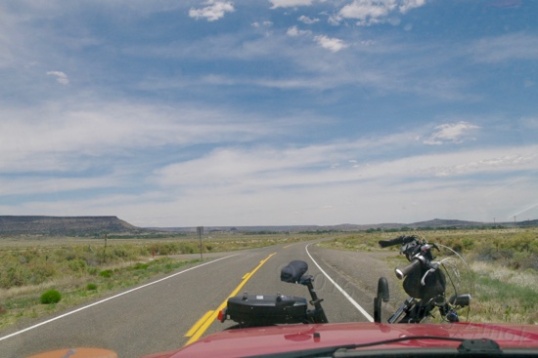 Museum tour over, it’s time for the song of the highway.

The arrow points to a motel and grocery store just on the opposite side of 66. These days, it’s just a bare concrete foundation close to the road.

The people in San Fidel, New Mexico have a sense of humor. 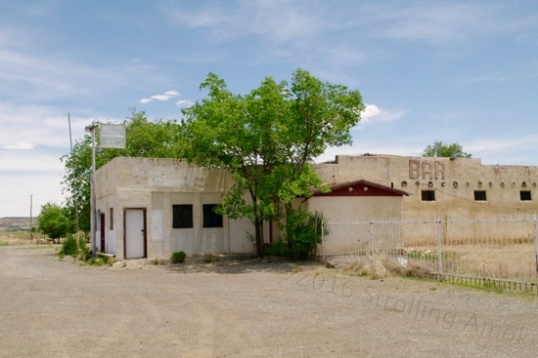 Some miles on, a roadside place of libation.

Across the street is a defunct…something.

The old truck perched out front is looking kind of like the business. It’s history.

More miles eastward, this hill made me think that building something at the bottom would be risky.

By the way, I saw a couple on road bikes loaded down with gear. They are apparently doing 66 on bicycles. Whenever you think you’re doing something adventurous, somebody always comes along to re-calibrate your scales back toward reality. 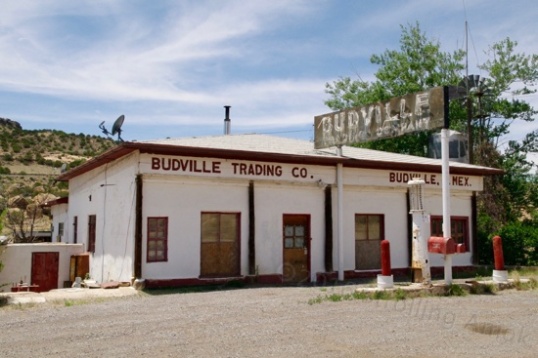 Closed, but how recently? It obviously used to be a very early gas station, judging by that tall white pump. It has columns in it with measured volumes, so however many drained into your tank by gravity, that’s how many gallons you got.

Beside Bud’s is an interesting collection of dead vehicles.

And more scenery. All free.

To have this beside the road as you’re tootling along discourages “are we there yet?”

Just a mile or two further, 66 snakes this way and that, with some 20 MPH turns.

Now heading away from I-40 and toward Los Lunas, I pulled over to admire this. Hurrying to make time, Interstate style, suddenly doesn’t make much sense. 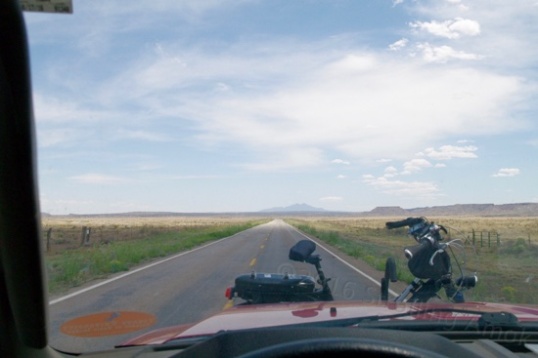 About 30 miles of long, empty stretches.

For what it’s worth, I assumed the town of Los Lunas would be a sleepy little burg. Wrongo. It’s huge, and the four lanes of 66 going through was a stop & crawl experience of a few miles! At 3 PM, I figured there must be an accident just ahead, but no. I’m not sure the concept of traffic light timing has hit here yet, but on the plus side, there isn’t a franchise not well represented in this sprawling town.

Huh? Oh, the Isleta Casino where I’m staying. They have a huge truck/RV lot, and I believe that I found the only level slot in the whole thing. Awesome.

At 7 PM, it’s cooled down to 88 degrees in the shade. It was 94, and thanks to a breeze through the windows, the interior of the Intrepid never exceeded 94. Still, I was hoping to tour the inside of the casino just to see it, but a stop to inspect their restroom facilities got no further when I frightened myself in the wall mirror. I’m dressed like Scruffy McFlea because of the heat, and this place deserves better. Oh well. At least I got a good haircut this morning, so I won’t scare small children. By the way, the restrooms are clean and posh, just in case you wondered.