The Sea of Semis 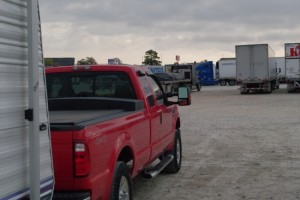 By morning, my rig was in the middle of a tight Semi sandwich!

I left Indianapolis and headed southwest through Illinois and into Missouri. By gum, I need to check whatever settings there are on my Garmin Nuvi GPS. It’s eager to avoid Interstates that will get me to my next destination more efficiently. Routed me out of Indy on a couple of minor highways with traffic signals when I-70 was calling. Stepping into St. Louis, it was going to keep me out of the city itself by routing me around the south beltway. “Keep left to stay on I-65, keep left, keep left.” Then suddenly it was directing me to “Take I-NN south, exit exit right.” I looked straight out the passenger window to see the referenced exit fly past at 60 MPH. “Golly gee!” is not what I said.

Although the GPS now warned me with what it called 20 miles of heavy traffic, it actually was very, very good rush hour traffic by Chicago standards. It kept rolling and never stopped completely in wide, smooth lanes. I was able to just stay on the right and poop along for a few miles before it opened up and we were flying. The I took an exit and after 10 miles headed south, was directed to take a two-lane that was headed southwest.

It was well worth the 15 minutes that the navigational snafu had cost me heading in. The road was glass-smooth as it snaked through some considerable hills. With no stop signs or traffic signals, it simply displayed a beautiful panorama of autumnal change. Wow.

Once west of St. Louis, I-44 in Missouri is a scaled-up washboard. You’re either going uphill or down. The Ford’s mighty 6.4 spent a lot of time on its turbo, only to nearly coast down the other side.

Toward the end of my day, I pulled into a rest area near St. Clair, one which can be used for overnight stays. After seeing that the 13 truck/RV slots were approaching half-filled at about 5:30, I decided to have mercy and go on to something else ahead. Truck drivers in general are highly regulated guys, many with tough schedules to keep yet with limits on how much time they can legally spend behind the wheel. At the end of their day, they park somewhere, eat some mediocre food, sleep, and leave early. Despite the movie images of bouncy seats and “breaker-breaker, good buddy,” it is not an easy life. When their day’s time is up, they must find a friendly, safe place to park, and get a few hours sleep. Call me a softy, but RVers usually have overnight choices that semi drivers do not. Their lives are difficult enough without cheapskate retired RVers hogging all the limited spaces available. I moved on to something I found online, Voss’ Truck Port, a vast truck fueling station. I got permission to stay overnight and was directed out onto several acres of gravel lot. By 10 PM, after a fine dinner and a movie in the camper, I stepped out to find the whole thing filled, and I mean filled. I looked out the window when I arose the next morning at 7:30, and half of the trucks were gone.