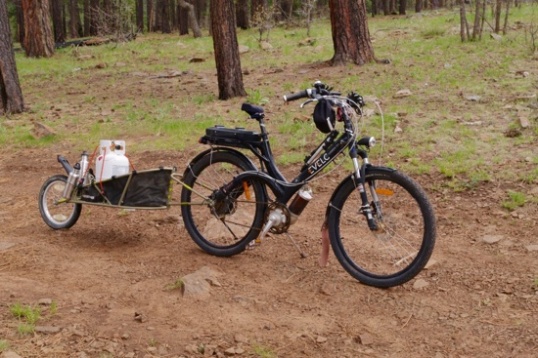 Thursday morning, one of the Grandby’s two 10-pound propane canisters finally ran out, and I figured that was my excuse to mount up and get it refilled in the little village of Mormon Lake. Occasional sprinkles of rain marred the departure, but it finally departed for good and I took off on the e-bike. That in turn gave me an excuse to tour the parking/camping area set aside for the Overland Expo that starts the next day. The parking this year is more orderly, being set along parallel rows.  However, it also seemed to cut capacity, and by the time I got there about 2 PM, they were already nearly full. Between that and the forest area where I am, I suspect that attendance will be beyond expectations. 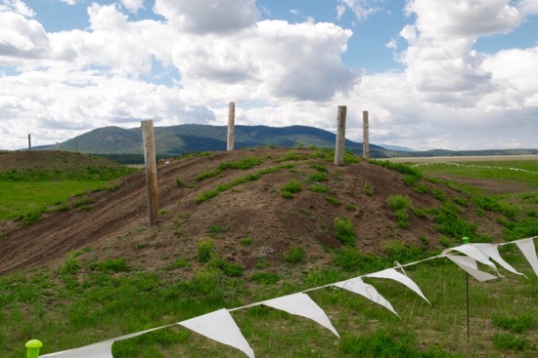 This is one little hill on their “advanced driving course, meant to get people used to what they’re not used to.

Leading to it is another hill that’s sharper at the top. I can confidently say that the long-wheelbase Mighty Furd would high-center (ground out) at the top of this. Now I know not to sign up for the Advanced Driving Course. 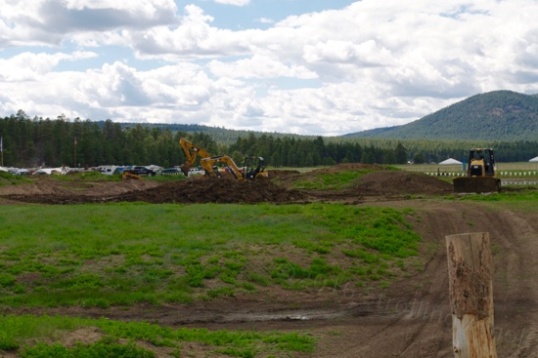 Heavy equipment is still working to complete the course! 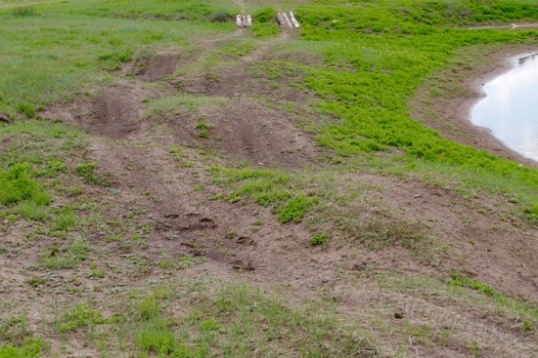 This little piece is intended to test suspension articulation, and most vehicles (like the Furd) will lift a wheel off the ground getting through it. Actually, with its perfectly even weight distribution, the Furd might well lift two wheels off the ground, except that these are spaced for shorter utility vehicles and SUVs. My pickup would most likely just totter heavily from side to side as a test of the locking cabinet door latches. 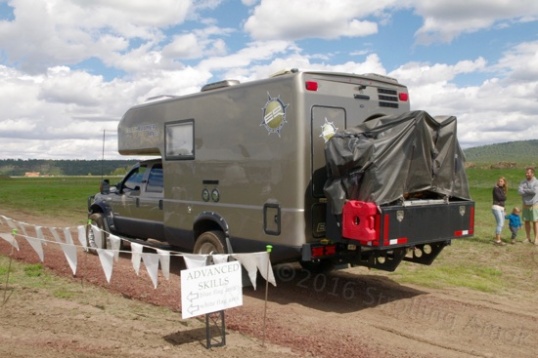 A high-dollar Earth Roamer arriving. Thanks to tractors and equipment using this ground, it was very bumpy, and the box on this thing was bouncing around very impressively. That’s significant, because there’s no bed involved as on my rig. The box is bolted directly to the frame. 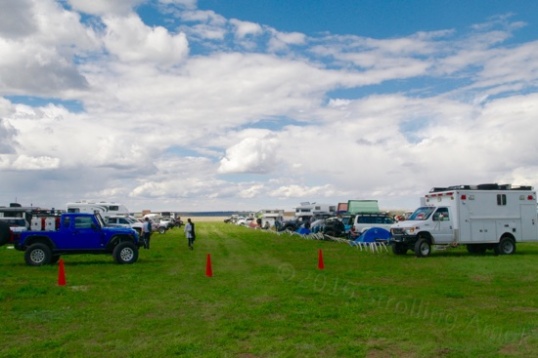 Row 2, just for giggles. The camper styles run the gamut, and if you want to survey what’s being offered on the market, this lot is much more comprehensive than the show itself. 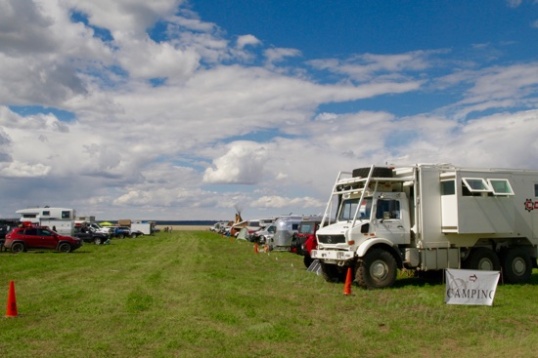 Row 3. That big rig on the right is for sale. You could probably snap it up for quarters on the dollar, if you sold your house first. 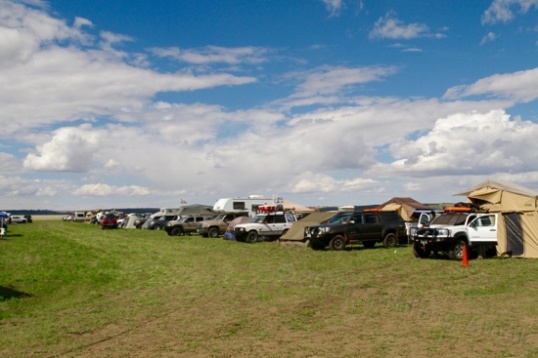 Row 4. Some folks rolled in with small cars, to tent it. Others had vehicle-based folding tents with ground rooms and awnings. 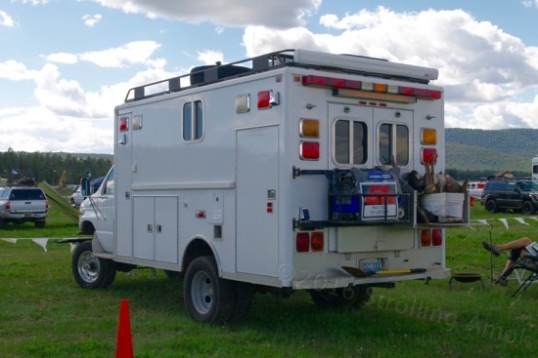 A re-purposed ambulance, complete with an F-250/350 solid front drive axle grafted in. Livin’ large. Yep, that’s a for sale sign on it. Nope, I didn’t ask. And yup, it ain’t cheap. 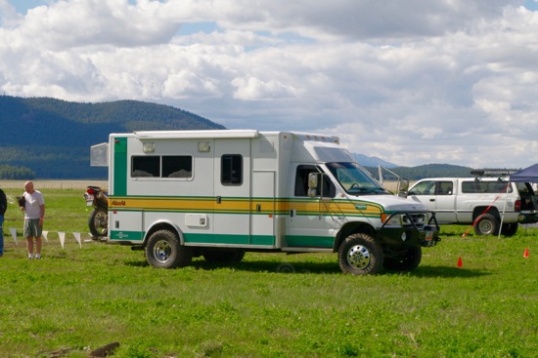 Here’s a similar one, except that it was never an ambulance. A custom build by a body outfitter.

I did use the parking lot tour as an excuse to run over and see if Four Wheel Camper was set up yet, and they were, complete with a ton of customer rigs packed in amongst the factory display units. But they were all shorty models mounted onto friggin’ white Toyota Tacomas! Only as I was departing did a lone Dodge pull up, but it had a short bed as well. I bumped into a guy named Tom who was telling him where to pack it in, and I jokingly complained that what they needed was an A-Class Ford Super Duty with the more luxuriant full-size Grandby in all its splendor. Oh yeah. He weakly pointed to the factory’s Dodge parked over yonder, used as an open walk-in display for the prospects.

When I mentioned that I was a recent customer for the last of the 2015’s, he said “Really? Oh, thank you so much!”  I unashamedly raved about the quality of my Grandby, and admitted that while some complain of the cost, I considered it obviously worth every penny when you plan to use it forever. He punctuated my complements with frequent thank-yous, and by this time it dawned on me that he might be from the factory. I asked whether he was with the factory or a dealer, he said factory, and introduced himself as Tom. We yakked about the solar I’d installed and he was taken aback by 360 watts of panels on the roof, but he was already aware of the recent problems with failing lightweight flexible panels. I considered my 75 pounds as the practical maximum, but he said a few folks loaded 300 pounds of equipment up there and somehow managed to still get the roof up without unloading it first. Amazing. I think we have a potential Olympic event here. We talked about the bed mounts, and how obsessing over keeping them tight for a year, until they can settle in, avoids a heap of problems. Then he mentioned I should stop by during the show and hit their refreshments and food tent for all their customers. Nice guy, huh?

Only later did I come to realize that I may well have been talking with Tom Hanagan, the owner of Four Wheel. Considering that he’s been the owner since 2001, when the drive for improvements in the platform began in earnest, it’s less of a mystery as to why he seemed to take my comments personally and earnestly, not as an employee would. He’s initiated a lot of improvements in a niche market that is still heavy swayed by price, so to have someone insist that the efforts (and price increases) have been well worth it, well, maybe my career history pursuing a better product when “it’s good enough for who it’s for” is the main managerial theme, helps me relate. It’s a maxim that the last 10% of a product’s development takes 90% of the project’s time (and cost). So, that last 10% is usually ignored, now more than ever. It was probably nice to hear someone appreciate the extra effort put in to make it so much better than the accepted standard.

Now I’ve got the bug to somehow get the Intrepid into that display for 2017, if only to show that mods are not limited to cookie-cutter front bumpers with brush guards and winches on small pickups. It could demonstrate that bloat is another option, with a bike carrier and a cargo box, custom solar panel carrier and dice hanging from the unusable rear view mirror. Trouble is, I’d have to be overnighting not four feet away from other campers, and who knows if they’d enjoy hearing the Longmire TV series as much as I enjoy watching it? I’ll have to think on that one for awhile.

I ended the day at the local non-franchise Pizza joint, the first time I’d seen it open for business, ever. They offered four kinds by the slice, very close to Chicago-style, and it was really excellent, as was the place’s ambiance. Affordable, too. No dinner for me tonight, thanks! What a great day!