The Williams District of Kaibab National Forest struck me one way and then another over the course of several days. When researching it prior to arrival, there were the usual cautions about “Don’t plan on being able to get out if it’s raining.” And true enough, the ground seems to have a high clay content that wants to goosh and then stick to whatever comes in contact with it when soaking wet. Only after I moved in did I discover that there would be moderate rain in the last three days of my stay here, but I’d assumed the worst and my campsite avoids the low-lying pitfalls that the majority of sites have here. Most drop away from the road, most capture and hold water in troughs, and most show signs of earlier wet weather struggles. Two in particular revealed epic, if unsuccessful, challenges of man and machine against Nature, challenges having no particular point involving necessity or destination. They simply involved manly attitudes and manly calls to action. Man quickly lost both challenges.

Indeed, half of my stay here has involved what I had hoped to get away from. Turns out that the Dogtown Lake pay campground a few miles further in, as well as the many campsites around my area, filled in for the weekend with locals. Outdoorsmen-types looking like camo clothing ads for Cabela’s Outfitters, nice young couples with tents, families with big travel trailers, and even a few people with gigantic motorhomes lined FR140 on the way to the campground as well. They started rolling in on Friday afternoon, and started rolling out Sunday afternoon. In the meantime, my chosen location turned out to be a busy intersection as long as the weekend lasted. It seemed like everyone down at the pay camp had to make at least one trip toward town each day, and many seemed to make several. Most campers were dead quiet, wanting only to mill about or sit in front of a campfire. The only disturbance came about at 10:30 PM, when what sounded like several motorcycle engines started one by one, revving for awhile, and then racing toward town, but returning too soon for that. Sounded like a motorcycle gang announcing its presence in the usual way that they do, in that “We’re here, straights, deal with it” look-at-me manner. Then again, mid-morning, same thing. 10:30 PM, same thing. Imagine my surprise to eventually figure out that the racket was one of the multi-generational families close by, running small one-man ATVs with the mufflers punched out. All they could think of to do with them is to buzz them at full bore up and down the main trails. Seemed like kind of a waste, somehow. The closer they came, the less they sounded like Harleys and the more they sounded like angry lawn tractor motors.

My closest neighbor, maybe 150 yards away, parked his motorhome, SUV and old VW Beetle, started a nice campfire, and turned loose his dog, which was a bit yippy but not too bad. Three hours later, he was riding down the trails on his dirt bike, whistling for it to come. (He found it, I think.) By late Saturday, I was hearing the unusually deep echos of several large dogs down in a valley, sounding for all the world like angry mastiffs in a fright movie. Perhaps, like the ATV motors, the distance and echo effect of the trees will reveal them to be dachshunds. Those are the only reminders left of the weekend, everyone else having cleared out.

But, I’ll be clearing out as well. If I weren’t, I’d have to be moving to a different campsite. See, there are logging operations going on here, and a guy in a big Cat tree carrier drove by one afternoon and said that this area should have been posted no camping, in preparation for approval on Monday or Tuesday to move equipment in and start cutting soon thereafter. I thanked him, and when he found out I planned to leave Wednesday or Thursday anyhow, he figured I probably shouldn’t bother moving to another site in the meantime. 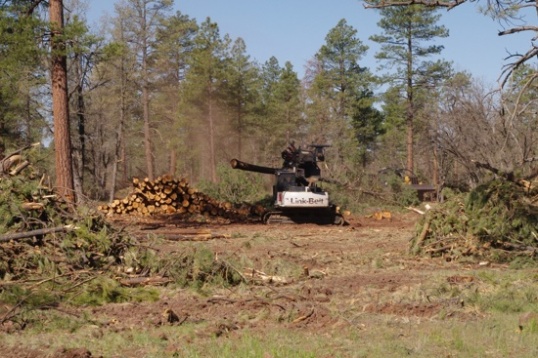 This is/was actually the start of a trail. Now it’s a tree-prep area where logging trucks roll in to claim the harvest.

Walking around had shown me what the logging operations were doing. My initial reaction was negative, because it makes a mess, scattering trees and parts of trees all over the chewed-up ground. Whole roads are blocked off and unusable for the rest of the year, basically, and new access paths are made by the huge vehicles. “Keeper” trees are marked with paint, and everything else is fair game, but the commercial outfits cherry pick what’s left, based on value. The gizmo that receives the pine trees that are dragged within reach of its arm picks them up and strips them of branches with the same speed and ease it would take you to wipe a walking stick dry with a rag. It’s kind of unholy to watch. They’re denuding the forest!

Oh, the humanity! Or is that tree-manity?

Then after riding my e-bike down to Dogtown Lake to see what improvement $20/night makes, I saw a marker on a walking path. It had a photo of a nearby hillside taken in about 1875, right next to one taken a hundred years later. The first photo was taken before use of the land had begun, and the “forest” was sparse, with tall trees spaced far apart on grassy turf. The more recent photo showed the same land filled in solid with trees, and claimed underneath that besides being bad for the trees and as an animal habitat, it transformed wildfires from natural, frequent, ground cover-cleansing yawners to the catastrophic Armageddons that Smokey the Bear warned us about in the 1950s.

So while I was scoping out potential future campsites on foot, I also began comparing untouched areas that I passed by with the areas that were being cut. I eventually discovered that the Forest Service was not, as I’d first assumed, selling off trees to raise some pocket cash. In fact, it was a rather complex and coordinated effort to make this section of Kaibab healthy forest again by making it more closely resemble what it was before we stopped letting it burn from lightning strikes. But this is no treehugger extravaganza. In essence, it is motivated by the desire to save the watershed of Williams as well as the town itself from the tinderbox effect that we’ve so carefully built up in the last century of effort to “save the forest”. Actually, it’s been to save the homes and lives of all the people who’ve put up buildings in forest areas, so preventing fires seemed to be a good idea.

This is a cut area where some remainder will likely be taken down privately.

Problem is – and I’m sure this is old news to all of you – those frequent natural fires stayed low, burning grass cover, brush, and saplings. The odd fires that made it up into the “canopy” wiped out any clumps of trees too close together. Eventually, you get an equilibrium where frequent ground fires keep the trees well-spaced and not competing for resources or trading parasites. The mature trees don’t burn, but everything underneath does, and tends to quickly regenerate. Stop the fires, and you get too much tall undergrowth, making it easy for flames to get high and take everything out. That doesn’t bounce back. In our case today, that’s whole forests and whatever is in among them. Such fires are easy to start and very difficult to put out, so the goal for the Williams District is to compare the probable costs of staying the course with Smokey the Bear, versus finding a solution and then acting on it. I vaguely knew the principles of controlled burns, but the paper I’ve linked to was informative and as tactical as it was technical. I found it worth a 20 or 40-page skim.

I find walking through areas like this relaxing, not exercise.

In the meantime, if the commercial part of the harvesting can finish up this year, I have my eye on a couple-three pretty darn nice campsites back in the cleaned-up woods, one of them close to a rocky escarpment that feels as comfy to be around as anything I’ve come across so far. I find the desert landscapes fascinating because they’re so unfamiliar to me. But, when push comes to shove, this section of Kaibab reflects elements of hilly Connecticut and Michigan pine forest – sans the clouds of starving mosquitoes. Without those, this is my landscape nirvana. I hear woodpeckers instead of coyotes, which I find preferable. The only question for me is whether those mauraded trails will be back in action as soon as next year, and whether motoring down into a different tangle of dirt trails at lake level will present a harvest of options, or perhaps weather-related headaches. I like leaving something for the next time through, if possible. 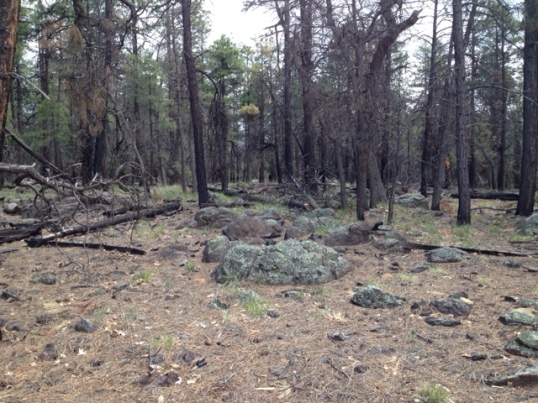 The commercial machinery can’t get to areas like this, so it stays for other approaches. But it must eventually be thinned out. Many of these already look dead, maybe from the effects of overcrowding.

Freshly-cut area. Appalling, yes, but I got all excited when I saw this, because I crossed it on the way to my new “dream campsite” just a few hundred feet further down a trail – with a large fire ring ready and waiting. They won’t clean it up THAT good, so I gotta get me a bow saw next year! At this location, they seem to welcome you reducing the “fuel load” on the ground, leaving only a few downed trunks per acre.