Well, the cargo box is up higher, but is also back farther…

While in Congress, Arizona, I installed a Curt hitch adapter, which has as many drawbacks for my use as benefits. The frame underneath the cargo box is now about 5″ higher off the ground, but is also placed some 8.5″ further rearward. Overall, I think it will help in the situations I expect to face, the prime drawback being that getting up into the camper is more complicated now. The frame was previously at the same height as the bumper’s step, making entry from the rear easy. It’s now useless as a step, and getting in requires a kind of side approach around the front of the frame in order to get at the bumper step. Entry and exit now requires more care in foot placement as well as using the entry handle for balance. I think the camper’s door now has the clearance to swing wide open, if it weren’t for the lawn chair and emergency shovel attached to the “back” of the box.

The Curt adapter itself can’t use StowAway’s hitch tightener – that now only fits the upper receiver that the box frame goes into. So, the box now won’t wobble in relation to the Curt adapter, but the adapter’s connection to the Ford’s hitch receiver can wobble, meaning that the clearances involved can and do allow the entire assembly to rock slightly to one side or the other while underway. I’m gonna have to locate a hitch tightener that will fit a 2.5″ hitch, if such exists. A 12″ box taillamp wiring extension cord was easy to find at Tractor Supply in Wickenburg.

When I pulled into Adventure Trailer today, which is supposed to be closed because it’s Sunday, one of the co-owners was demonstrating the prototype of a rooftop tent to a couple of guys from Expedition Overland. They were excited, as it represents a distinct improvement to what they’ve been using, and they are apparently going to put it to the test in their rather serious travels south of the border. I must say, I can’t find anything which AT makes is poser equipment, so when these pro-level touristas wring it out, AT will be most interested in their feedback.

Fitted onto a Toyota Tacoma, the truck bed shell opens… 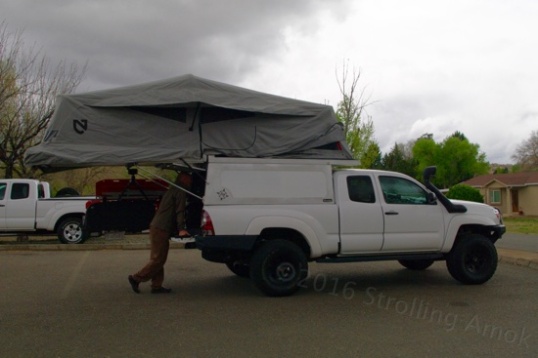 And presto, you gots a sleeping loft and tent.

See, the forward part has no floor. I would have thought a less generous opening would have given more platform, but then, I have no idea how these are used in practice.

Notice that the support struts go to the shell structure, not the ground, so there’s no walking into struts or having the platform position change as the vehicle shifts in wind or someone gets in or out.

7 thoughts on “Waiting in Prescott”