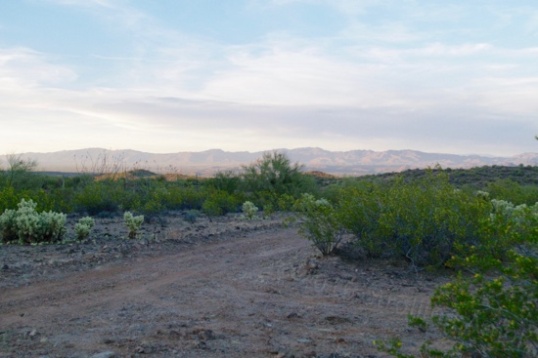 Having climbed up an interesting slope to get to my first camp, I stayed there for a few days before moving to another location in Wickenburg, Arizona. This is State Trust land requiring a permit, and I’ve never seen anyone checking for them in past visits. So I was surprised on my first morning there when someone in a white pickup truck came up the rise, got out and checked the Furd for the tag in its window before departing. Secluded as my campsite was, the Intrepid was high and in plain sight of the common campground below. 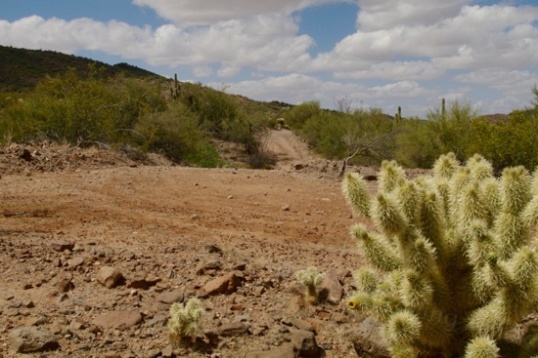 The trail I was on continued further, but the “V” at the bottom of a dip ahead posed a challenge for the overhang caused by the StowAway cargo box at the rear of my rig.

While I was here, I contemplated fixes to get the StowAway cargo box higher. That’s because I couldn’t get into this area as deeply as I’d hoped. There are two approaches that can be used, but they both extend the box rearward a significant amount. Thus much of the extra lift is cancelled out by the increased overhang, which can come into play whenever the vehicle is crossing the bottom of a dip in the trail. I first looked at the few available “folding hitch adapters” that would allow the box and its frame to freely pivot upward on contact with the ground. They aren’t built for that, being intended to allow a flat storage platform to be folded up and locked vertically at the back of the vehicle. That appealed because if it worked properly, the amount of added lift would be inconsequential – the box would lift however much the ground forced it to rise. 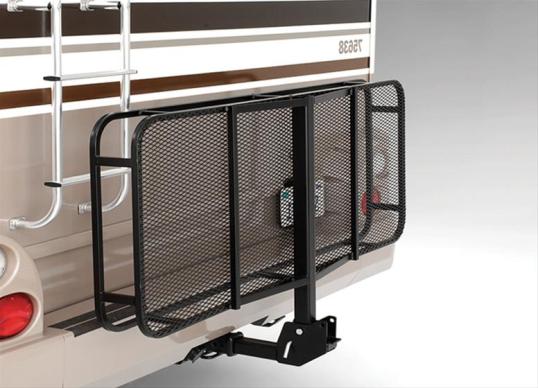 This Surco hinged adapter could be left unlocked, allowing it to lift up when required.

But the drawbacks brought it out of the slam-dunk category. Trying to reverse in the middle of a grounding situation would tend to make it dig in rather than skid. And as with my first ground-out covered earlier, contact just at one end would impose more twist force than lift. The end effect on the hinge mechanism and the hitch itself could be unfortunate. The mechanism itself would tend to allow rocking from side to side, which cannot be damped by conventional anti-sway hitch locks. It’s made to do one job, and trying to get it to do something else would pose some issues.

Strolling Amok reader Rod’s suggestion of a “z-shaped hitch adapter” prompted me to look at so-called high-low adapters for tow bars and the like. They fill the vehicle’s hitch receiver, and then provide a new receiver above or below the original. You can go anywhere from 2″ to 10″ offset with these things. I looked mainly for one that would stick out of the receiver as little as possible for the amount of lift it gave. Not much point in going for stratospheric box lift heights if the stick it’s mounted to has long since dug into the ground all by itself, and all of the high-lift versions were especially long. Blue Ox makes one that has an effective length of only 6.5″, with a lift of 4″. That was tempting, but the $125 price was not. It’s strength overkill, for my purposes. I settled on a light-duty Curt adapter that extends 8″ and lifts about 5.5″. At $72, it’s less painful. It actually has two receivers built into it, the lower one being intended for towing or recovery devices, while the upper can be used for bike racks or my cargo box. With a tongue weight rating of 350 pounds, it should handle my overloaded StowAway. It will be arriving in a few days. 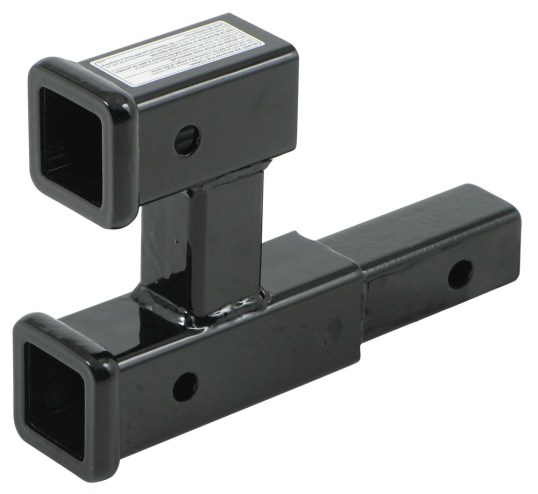 This Curt adapter is made to add something like a bike rack to your towing rig.

Part ordered, I moved to a camping area north of town. There’s a BLM area overlooking the Martinez Wash, which is a very wide and deep one. Rincon Road goes east off of Route 93, and just keeps going. Before setting up camp in a commonly used area, I investigated a difficult-access site on top of a mountain, further on up Rincon. I’d driven past it last year, noting the difficulty of the final climb, which required 4WD for the empty pickup. Heck, it took 4WD just to get up the main approach, dry! 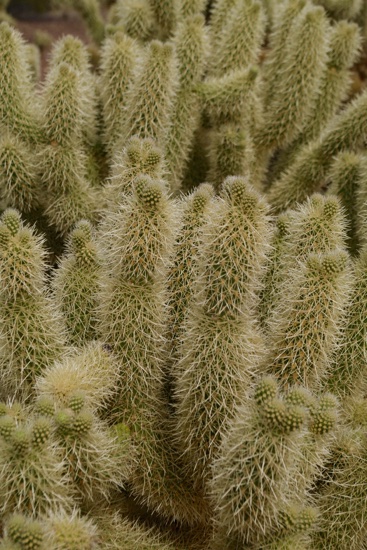 Say hello to my leedle frien’! The spines on these easily penetrate anything but hard leather. Ask me how I know that.

This year, with the Grandby camper in place, the initial approach still caused some tire slippage on the loose, rough surface. Not quite enough slippage to require 4WD, but 4WD-Low would stop the nonsense and get the 10,000 pounds up the mountain with minimal stress. At the top of that climb are side trails to both left and right. The left one is a bit narrow for the full-size Ford, and while the one to the right is quite wide and provides a final climb to the summit with a campsite having a rather spectacular view, it’s wide for a reason. This final slope has deteriorated by erosion to the point that those of us in stock work vehicles will find it to be a test of articulation and ground clearance, not traction. Rather than the usual two deep ruts coming right down the slope, underlying rock has turned the erosion into a series of deep crisscrosses, with a few big rocks jutting upward, looking for an oil pan to smash against. It’s wide because people have had to hug borders in an attempt to escape the various hazards. Now, those hazards go to the borders. With marginal clearances, this slope is not something you’d want to have to back down. 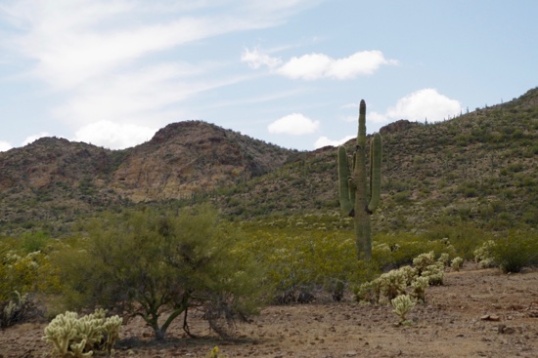 Half of the view from the State Trust site was like this.

Last year, a 2WD van heavily loaded at the rear made it up this same slope. This year, I’m not so sure it could.  A stock Jeep could make short work of it, but I have my home on wheels. I put the Mighty Furd in 4WD-Low and eased up the slope very slowly, with it yawing slowly side to side like a trawler in a storm. Picking a path up twice forced a decision about the lesser evil: projecting rock to the left, or articulation dips to the right that might well ground out the StowAway’s frame – or the Ford’s running boards, for that matter. I was grateful when I reached the top without contact or drama. Another half-mile further, the dream campsite was there and unoccupied, not surprisingly.

Rather than have to pick my way back down the way I came, I decided to descend via the back door. This trail is actually a loop that, among other things, connects back to Rincon Road. I remembered it as being easier to negotiate, before. It was something to marvel at, in its own way. What it lacked in loose rock and brevity, it made up for in nasty, long spans of solid, undulating and unforgiving rock. More care in negotiating was needed here than in the previous climb, and with no place to chicken out and turn around, I managed to graze the cargo carrier frame “only” once. And just when you think the worst part is over, another challenger lies just ahead.

I decided at that point that I’d wait for the Curt hitch adapter to show up before camping there, since “lucky” is no substitute for basic suitability to conditions. Besides, the Grandby was visibly rocking and rolling in the truck’s bed, indicating that its mounts were in need of readjustment.  FWC euphemistically calls this “seasoning”, as the truck bed sheet metal floor deforms slightly under the stress on the mount eyelets. It eventually stops deforming. Given the Super Duty’s suspension stiffness even under full load, the racking from side to side even at a halting creep had been impressive. Time to open the internal camper access doors and check things out. The entire loop, starting from where I planned to make base camp, probably isn’t much over three miles, but took well over an hour. Pictures? You want pictures? I was too hyped. You’ll have to wait until I’ve raised the cargo box and taken a second run at it. Why not just set up camp there now? Well, it’s one of those sites that needs an uninterrupted long stay, and this week is not suited for that. If you’d like to beat me there, that camp’s GPS coordinates are 34.051842, -112.751622. Good luck.

On the final descent back down the mountain, saving the brakes by crawling in 4WD-Low, the clothes rod I hung in the rear of the cab had finally had enough and pulled the one remaining ceiling hook out of the wall over the rear door passenger side. No matter – I had bought two S-hooks after the one on the driver’s side had failed on the return from Furguson Lake near Yuma, during the first and only test camp. Not so easy will be fixing one of two hanging clothing storage compartments that let go just prior. In the meantime, all aspects of the modified Four Wheel Grandby itself are performing splendidly, and with the modifications time crunch over, it’s “Ahhhh, west and wewaxation, at wast!” as Elmer Fudd once said. 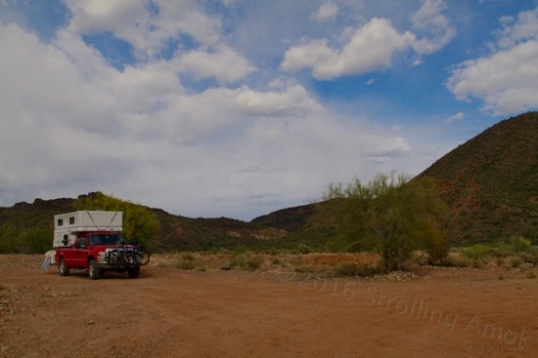 I’m calling this basecamp. Just beyond the flat here is a deep drop down into a sandy wash popular with ATVers, but due to distance and depth, noise is very limited and infrequent.

6 thoughts on “The Literal Shakedown Run”