The Zenith of Civilization 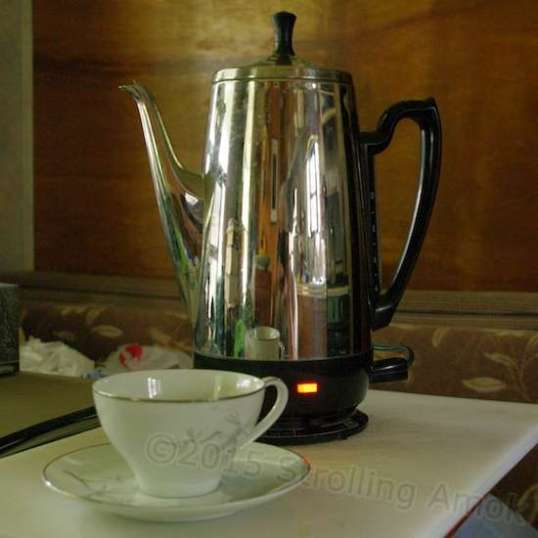 Skyscrapers, medical advances, Hubble telescope, cellphones, Internet, wash and wear clothing, Hello Kitty merchandise, they all pale before mankind’s greatest triumph, the coffee percolator. The start of my day always begins with coffee, and it’s been instant coffee for as long as I’ve been on the road. Now, encamped in the wilds of Rockford, Illinois, full hookups on the Defiant have at long last afforded me the real thing.

Seems like everyone has their own preferences on how to make good-tasting coffee, but my own taste buds decidedly lean towards a General Electric heirloom handed down through the generations. This thing must be at least fifty years old, and its heating element had to be welded back into place in the nineteen eighties, to keep it going. It nearly gave me an anxiety attack when it blew out, but a sympathetic and capable machine shop foreman where I worked took it apart and fixed it. It came with internal fittings to optimize it for three cups or less, and apart from being coffee-stained, they still work fine. Try to find one just like this in Walmart today.

My Louisiana-based neighbors here in camp, upon hearing that I was relegated to drinking instant coffee, made sympathetic sounds of pity and uncondemning disapproval at the hearing, and poured a little extra water into their own percolator in order to offer me a cup of coffee heaven. That motivated me to whine to my daughter who, as keeper of the Magic Device, returned it to me for the duration of my stay. (She has other coffee options, including another modern percolator. I’m not heartless.) It’s not practical to run a percolator on solar, nor supply the copious amounts of water needed to wash it out when boondocking, but with the 120VAC power available and all the water I want here, it all came together for good. Oh yes.

Giddy, I ran out and got some Newman’s Own ground coffee beans on sale, but then quickly rediscovered the limitations in following the herd. Ground coffee today is prepped for drip coffee makers and, as such, resembles coffee dust. That’s fine for a once-through using a paper filter inside a huge tub, but in a percolator, that dust simply clogs up the drainage holes and overflows the internal drippin’ cup. You get coffee, but at the cost of a greater internal mess from the bypassed percolation. I was also ambivalent about the coffee that resulted. It had that Starbucks wallop, and I found myself adding water, subtracting coffee, and cranking down the perc time to try to compensate.

See, when I go someplace (rarely) to order breakfast and coffee, all I want is a cuppa joe. Nothing exotic, nothing violent, nothing flavored, and nothing reduced to a semi-viscous state in order to pump its caffeine levels off the meter. Since I don’t wish to chew the grounds or savor a burned taste, cowboy coffee is out, too. All I want is a cup of coffee, usually passed once through a Bunn commercial coffeemaker. That’s fine, and sometimes excellent. I have no gripes with good drip coffeemakers – I just appreciate the ability to adjust the brew. I prefer mild. My own experience with homestyle drippers has been that the coffee is good. It’s just not savory great. Your own results may vary.

A few days later, I recalled my standard, Eight O’Clock coffee. It’s usually offered as whole bean, and with a an adjustable coffee grinder at the store that can be set specifically for percolators, the result is coffee “sand” instead of coffee “dust”. Makes all the difference in flow. So, I’m in hog heaven these days.

I figured I was excessively eclectic in my perc-mania, but a few days later, my neighbor’s percolator gave up the ghost. They appropriately viewed this as a serious setback, and came home later that day with its replacement – a General Electric model that had a marked resemblance to my historic piece. Now, I’m not saying theirs will last like mine – probably not. And, it no doubt lacks the small-brew internal add-ons. But, they are enthusiastic about enjoying coffee toward the end of their day, and they once again chose a percolator. Just saying.

I’m also in hog heaven because I was able to remove rust stains at the city water hose hookup on the trailer (thanks, Matt!) using a local equivalent of Iron Out, so the Defiant has lost a bit of its unique Trailer Trash ambiance. And, I was able to effect a final roof edge seam seal before the plague of starving mosquitos moved in from all the rain we’ve been getting. No more mystery leaks during the big sky dumpers. I’ve found moments to vacuum and wipe a lot of the pure Arizona dust out, and have managed to clean out much of the grunk from counters, sinks and the range top. The toilet is now clean, and with a further effort on the linoleum flooring, I’ll have a living space that would make any woman discretely shrink from touching anything, rather than lurch back outside to fall directly into a coma. Unlimited access to water is not a bad thing, yet I still find myself automatically using as little as possible. Boondocking does that to you.

Nope, no adventures to report, at least nothing bigger than watching several Rottweilers trying figure out how best to vault a fence as I cycle past their farm on my way to town. There are two goofy Weimaraners fenced into a huge yard close by that love to spot me and dash toward the fence, but they spend most of their approach knocking each other about, since whichever is leading momentarily becomes the new object to be chased down instead of me. You can tell they think it’s joyous fun. The Rottweilers, not so much.

This camp being immediately south of the city, I did not expect the wildlife I’ve seen here. Numerous deer, and many owls hooting each night. A small fox dashed in front of the truck on my return trip home last night. Rabbits, songbirds, raccoons, you name it. And did I mention mosquitos?

20 thoughts on “The Zenith of Civilization”