Oops! Goofing with a jackstand on the soft ground of the forest allowed the trailer to twist off it, dropping the tongue to the ground.

Arriving at quaint Mormon Lake Village a couple of hours before sunset yielded NF-219, a track just south of town that quickly turned to ascend a low mountain. At the bottom though, it was muddy from recent rains, but the mud was not bad enough to be a show-stopper. I pulled into a treed area that seemed to allow a circle path through it, but then found that, unlike Darth Vader’s revelation, the circle was not complete. The rig wasn’t trapped, but the back-up would be an ugly affair, cranking the hitch at an angle it deeply resents.

Since the sloppy climb up the slope was hemmed in and rocky, I broke out the mighty Aurora e-bike from its carrier at the front of the equally-mighty Furd and made my way up to look for something usable. The sites I found were problematic. None were level enough to make things easy for placing a 55-foot rig, and all promised a level of tactical maneuvering that would have to be carefully choreographed to succeed. More easily-used campsites appeared higher up, but those required crossing washouts deep enough to easily ground out the Defiant’s tail. Dragging the tail over soft dirt is no problem, but digging solidly in or trapping the skid points between deeply embedded rocks is.

I settled for a pleasant branch off into the trees which could provide at least a daily glimpse of sun for the solar panels, given enough back-and-forth work to wedge the trailer into position. Back down the trail I went, to stow the bike and bring up the trailer. It took awhile to get the trailer into its final position, since the combined rig in place always seems to take up more acreage than I remember it needing. That’s the kind of recurring surprise that imposes a challenge, whether you’re up for one or not.

Once in place, the campsite’s slight nose-to-tail slope surprised me, too. It wasn’t so slight. I’d made the error of thinking I could just use my standard setup of placing a supportive cone under the trailer’s tongue jack, and winding it down to its lowest position. Wrongo! Since the jack has a limited range of movement, finding a spacer under its foot to get the trailer level can be an orchestrated affair at times, and this was one of those times. You need to brace up the tongue at its current position, and then change whatever’s under the jack to allow what you’re wanting to do. A jackstand under the tongue temporarily held it while I removed the cone.

The earth under the jackstand was soft enough to compress quite a bit, which wasn’t a problem in itself. What made it a problem was the handy-dandy Camco tire locks, wedges that fit between the tandem tires. With the wedges jammed in place, the tires are in theory kept from rotating. But this is where theory and practice diverge: they don’t hold as well as they should, and the trailer promptly pivoted at its axles, allowing the tongue to move sideways. Since the jackstand was on such poor soil, it simply leaned over and allowed the tongue to gently flop down to the ground.

The Camco tire chock is challenged even when cranked down hard. They must be periodically re-tightened. (Those brown stains on the fender are from water at a commercial campsite in Marengo, Illinois.)

The good news was that it didn’t land on any part of my anatomy, since my proven faith in my own abilities is exceeded only by my learned faith in Murphy’s Law, so I had kept a distance from the thing while I worked my magic upon it. I’ve never grounded out the tongue before, so this was one of those thoughtful “hmmm” moments. The sun was approaching its farewell, and the propane fridge, newly stocked with pricey produce and such, has to be pretty close to level to run decently. Time for desperate men to do desperate things.

The tire locks were still tight, such as one may choose to define that, so I set two nicely-shaped and sized rocks under each rearmost tire to act as chocks. The tongue jack, now bereft of a supportive foot, was simply a thin tube and only drove itself into the ground when cranked. Out came the 3,000# hydraulic jack from the truck bed, but its accompanying handle was nowhere to be found. The handle acts not only as a means of cranking up the jack, but as a valve control to lock or release hydraulic pressure. Fortunately, a long socket wrench handle I have just sleeved into the jack’s handle receiver, and a genuine, American-made Irwin Vise-Grip acquired before the Chinese Cheap-Ass Tool Invasion served as a dependable way to control the pressure valve. The hunt for the proper handle would have to take place tomorrow.

Jack-in-a-hole got the nose back up to a workable height.

I had to use a small shovel to allow the hydraulic jack to get underneath the trailer tongue, and then insert a good-sized flat rock under it to keep it from simply driving itself into the ground too, as I pumped. Up the tongue came, in stages, as I frequently fed additional boards under the tongue while it rose. The original equipment jack foot eventually fit under the tube, and gave good support on the ground. The tongue jack was then able to take over and get the trailer level. Whew! I pulled the trapped jackstand out and put everything away, and hurriedly deployed the Defiant’s hefty solar panels before the sunset darkened. How to get the 1,200# tongue back up high enough to hitch up again for departure would be a problem for its own time.

While I enjoyed supper that evening, I contemplated the upcoming Overland Expo that would arrive at the expansive Mormon Lake Lodge grounds in a few days. It attracts not geezers like myself, but active younger people who yearn for the adventures inherent in the exploration of remote areas and very challenging terrain. Out here, getting from point A to point B on unmaintained trails can get pretty hairy in some places, and chances are, if you have a problem that you can’t resolve to get rolling again, ain’t nobody going to just happen along in time to save your buns. No cellphone signal, and no tow truck access. Besides, Triple-A doesn’t pay any attention to you when you’re far enough off-road. Carrying spare parts, tools, and specialized extrication equipment is de rigueur. Last ditch, these folks carry emergency satellite communicators, conserve water, and hope for the best. Thus the challenge and the adventure. You have to mix the old Boy Scout credo into the fun, otherwise you’re in deep doo-doo should something crippling occur.

As a 90’s boulevard travel trailer designed to cruise from one KOA campground to the next, the Defiant is big, heavy, and low enough to the ground that it provides that same pioneer improvisational challenge when dragged into the outback, albeit at a much lower level on the scale. The terrain troubles you can get yourself into surface much more quickly, but they are certainly there, and must be dealt with. Same problems, similar solutions, but not so far from pavement as the great majority of other rigs. Heck, a few days later, at least eight huge fifth-wheels with ATV trailers sailed on up past me to gather in a huge area a mile away that I couldn’t possibly reach. Their goal was to set up a base camp for the Memorial Day weekend. A couple of Class C motorhomes went up, too. Show-offs!

So, strictly speaking, I’m living the adventure lifestyle! I’m overlanding, you betcha, though little did I realize that renaming this tub the Defiant would be more appropriate than I figured on.

Elk remains just ahead of the Mighty Furd. 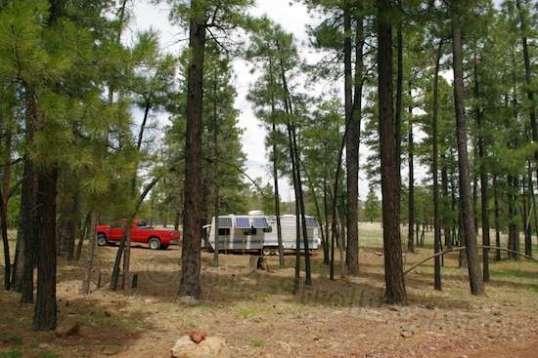 With the trailer fully levelled, the ground slope becomes apparent. 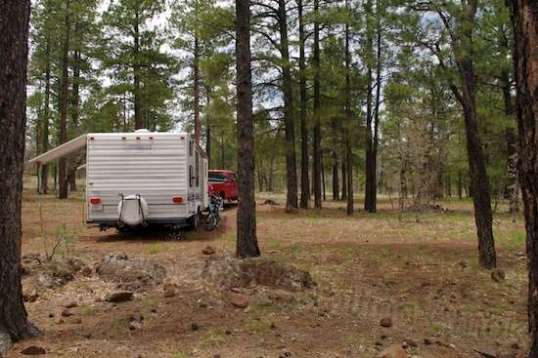 Just another shot of camp. Nice, eh? Life is hard.

More elk within view of the campsite, only these ones are still alive!

The morning before the Expo start…Schnay!

Actual air temperature was above freezing nearly all the time, so the snow didn’t really stay long, and although the trailer lost its heat quickly because of the liquid topping, there was no danger of ice damage the plumbing or Tankmin hoses. Oddly, the tubular handles of those extending painter’s poles fill with water, and must be inverted awhile before being stowed. They don’t seem to be affected by it, though.