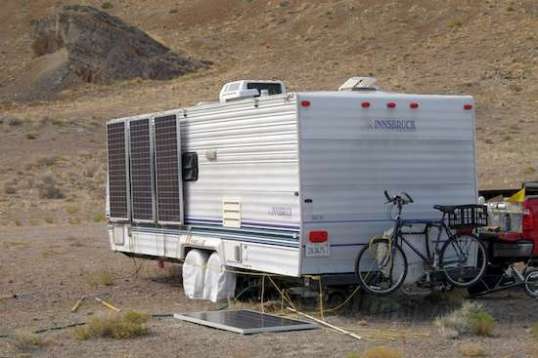 Solar panel #4 safely on the ground after being found hanging on one hook.

RVs are heavy – ask anyone at a fuel stop. But they also have a very large sail area, a trait which rarely works in their favor. They are highly subject to bad weather and, out west, there’s plenty of that to go around in the late summer.

A couple of nights ago, a very high wind came up in camp, one that wasn’t in any forecast. The forecasts said current wind was and would remain at 6 MPH. Night winds haven’t been unusual here in Wendover, blowing in well after sunset and rotating around in all directions for an hour or so. Often, it’s like throwing a switch on a fan.

Well, this one was a doozy. The good news was that it decided to blow in pretty much straight from the nose of the trailer, which poses the least threat to the Kleenex box aerodynamics of the Defiant. Wheel locks between each pair of trailer tires work quite well to resist any movement.

The wind had started in as usual, but didn’t let up this time, and I stayed up just short of midnight just to keep tabs on what was going on out there as it shifted around. Normal…normal…then not normal. It shifted to the nose and then dedicated itself to a building stream that made the trailer shake. That in itself is not unusual. What was unusual was the sheer speed. It was fast enough to shift one’s attention to what’s next, rather than gauging and comparing to the past. This was new territory, off the scale of my past experiences. All I could do was wait for it, whatever it was.

This is a fairly remote area, and it was black as pitch out there. I grabbed a flashlight, looked out the window and checked the poles supporting each solar panel. The trailer positioning had not been quite right for the arc of the sun (which does not match a magnetic compass East to West), and the panels were now at full horizontal to correct this. Given a wind from the nose, I saw this as okay unless the wind shifted more to the “driver’s side” (south). The panels were all tied down to a string of eyelets along the bottom edge of the trailer.

But what I viewed out the window was not okay as I looked at the first three poles. They were all at an angle, their bottom ends having skittered their way rearward across the ground a little over a foot. This indicated that the panels had been lifting just a bit against the tie-down rope, the pole bottoms being blown sideways a little more each time. The panels can’t be tied down so tightly as to prevent this. This can only be prevented by tethering down the pole ends themselves – which I hadn’t figured would be necessary, given the mild weather forecasts and limited nightly bluster. There was much more slack in the tie-down rope than I expected to see from this movement, and the positioning of the rearmost panel is not reliably viewable from any window. Where was the extra rope slack coming from?

I may as well emphasize here that tethering the pole ends to the ground and tying down the panels are not redundant systems at all. Stakes in the ground don’t resist being pulled back out very hard. They are only good for controlling the possible sideways hopping of the pole ends during panel lift. Panel lift cannot be entirely prevented using rope. There is always stretch and slack. Rope does limit lift to an inch or so, which is all that is really needed as long as the pole ends can’t shift on the ground and begin providing more slack. So each system depends on the other to do its own job. On a ground-based system, which is what this is, a little bit of slack is a good thing, since the trailer rocks in the wind, too. Making things too taut, like swapping the rope for wire cable and a winch, would quickly begin tearing out related hardware and bending the solar panel frames, snapping the glass. Better side-mount systems with fewer compromises and drawbacks are certainly possible, but are not really practical to implement on this old eggshell.

I was wondering if I’d even be able to swing the entry door open to get out there, when the wind suddenly dropped to a strong but manageable breeze. Time to act. If those support poles shift over enough, the entire panel can swing down unsecured, and bad things can happen.

Staking at this point was not possible, so I quickly decided to chuck the poles and fully lower each panel against the trailer wall, tying them down tight. I went out to check that rearmost panel first. Oh my. It was now hanging by only one of its two hooks, and had swung around 180 degrees, facing the wrong way. This is a good trick, because the hanger hardware can’t be disengaged at any normal deployment angle. Its pole must have skipped over too far and dropped it to near-vertical, allowing disengagement. That explained the extra rope slack. But, given the wind direction, it was now hanging from the “wrong” hook, which was a mystery that couldn’t be addressed now. Both the panel frame and trailer hanger showed damage. 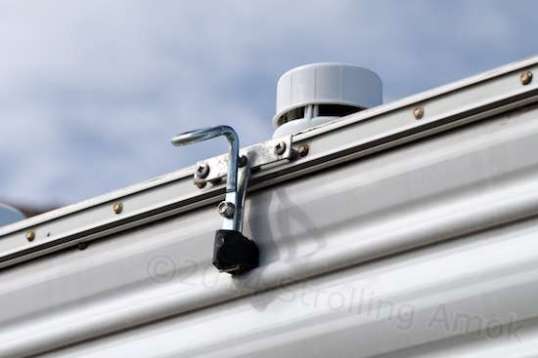 This is what a hanger eyelet is supposed to look like. 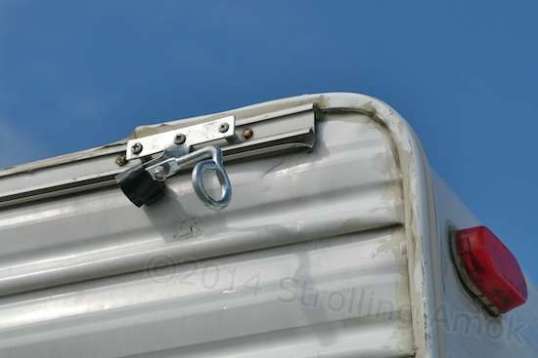 A hanger eyelet after being torqued around by the rotating panel. Fortunately, it held onto the panel without dropping it to the ground.

I got the panel completely free and set it flat on the ground, where it would be safe. Then I dropped the remaining panels to full vertical and tied them down tight. When the wind built up a bit later, it shifted more to the side, and everything held well, so I went to bed. 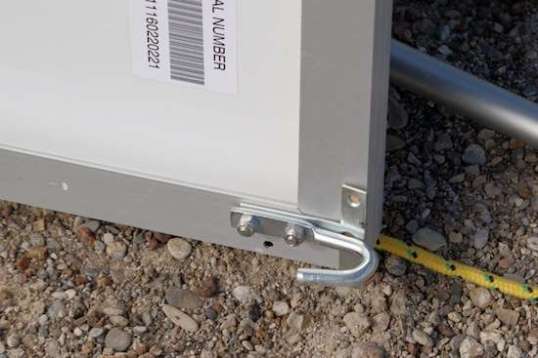 The remaining “good hook” of the rogue panel. 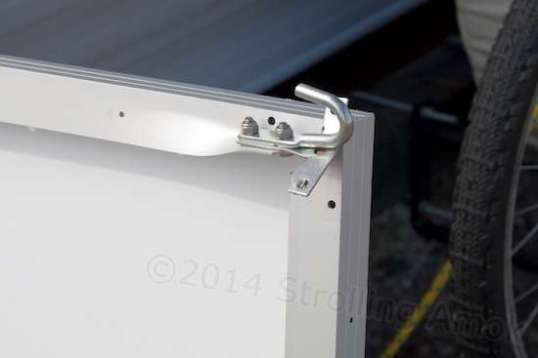 Here, the other hook is intact, but the surface it’s mounted to is bent, and it may be a real bugger to return the hook into proper alignment.

Surveying the wreckage in the morning showed that the wind must have been quite something. The front window cover that shades and protects the window at the nose of the trailer had collapsed an internal brace, and was sagging. It is fixable, but may be too involved to do here, where no meaningful hardware store support is available. 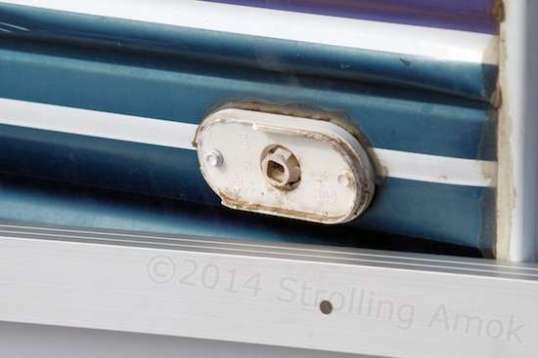 The side marker light was nearly wiped off by the swinging 45-pound panel, and a replacement is already on-route.

As to the fourth panel, the good news is that it is still electrically functional, suffering only damage to one limited area of its aluminum frame. The matching hanger eyelet on the trailer is also intact, the damage being limited to a hardware store T-bar that is replaceable. I happen to have one extra stowed away. The swivel hardware at the bottom edge of the panel (that the pole screws into) is broken as well, since it can only swivel so far. That came from Home Depot. Most likely, the angled pole helped the dropping panel disengage the forward hook first on the way down. That gave the panel the freedom to swing around and start bending things up. 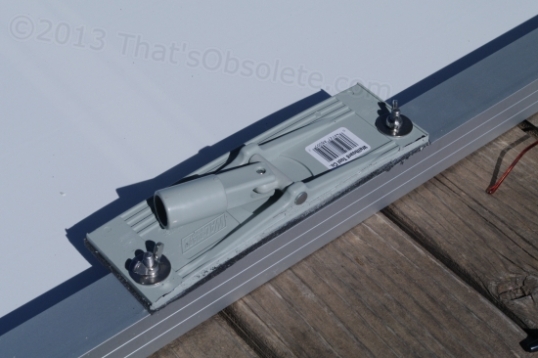 This Wal-Board Tools articulated pad joins the pole and the panel. The joint will break if highly stressed, which is probably a good thing.

The only dicey part of the repair will be the need to accurately re-bend the solar frame flange back to its original position in order to return its hanger hook to proper alignment. That won’t be a slam-dunk, since it will be easy to screw that up and ruin the glass panel itself, or warp the structural part of the aluminum frame. Until then however, the solar system still works simply by leaving the panel flat on the ground.

2] Always stake down support poles regardless of conditions.

3] Always orient the trailer, aiming WSW by the magnetic compass, so that horizontal panel positioning will not be necessary to improve morning sun exposure.

4] Take nightly blustery winds in Wendover Utah as a signal that they may eventually get more than blustery. The nearby mountains probably magnify local wind speed and direction.

5] Keep extra T-bars in storage, since they are the weaker “sacrificial” part of the whole hanger system. Their demise helps prevent tearing anchor screws out of the trailer itself, or bending the heavy unrepairable eyelets.

6] Be thankful that nothing important was knocked out of action, or is unrepairable. This damage is an inconvenience, not a crisis.

7] Also be thankful that it was a nose-wind. A sidewind at that speed could have resulted in a lot more adventure than watching the solar panels go AWOL.

9] And, as for support poles, always stake them down. 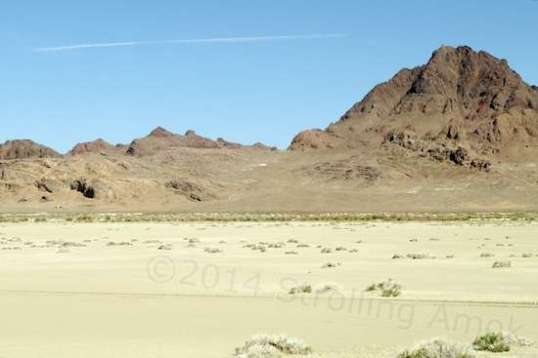 A tiny speck in this photo, Camp Defiant is at far left center. 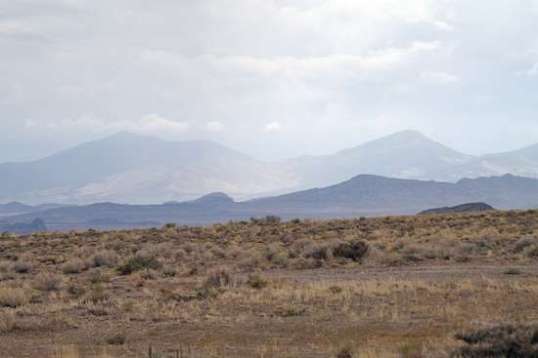 The view southwest, toward Wendover. When the sky looks like this, a 9-mile bike trip to town may get moist at times. 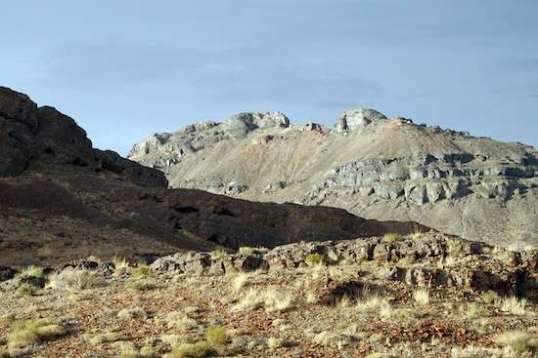 Yet swivel around to look northwest, and it can look like this – for awhile.