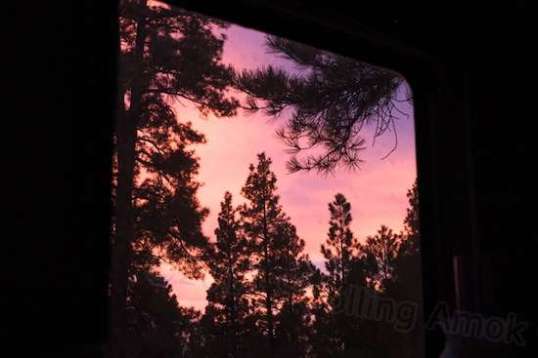 So, I’m sitting, enjoying an appetizer before dinner while watching a DVD, and discover that the sunset view out the window is more interesting.

The three days of high winds are over, and without mishap. Might get some significant rains tomorrow, so I’m taking yesterday and today as an interlude between possible weather events. Sunny and 74 outside yesterday, with a manageable breeze. So I scraped myself off, refilled the trailer’s water tank, and headed for the Market Plaza inside the south entrance of the Grand Canyon National Park to access their Post Office and General Store (which includes a grocery store). I skirted the suicidal $25/vehicle to get in by brandishing my free-admittance America the Beautiful Senior Pass that cost me all of $10 and never expires. I almost got breathy as I went through that gate!

Wow. The paved drive in, the signage, the architecture, and the manicured mix of rustic and polished reminded me of Disney World’s Frontierland. Now I know where Disney got the look. I expected it to be unpleasantly packed, but it was lightly busy, and tons of campground space lies unused. Perhaps this is not yet the heavy season. There’s a whole lot of folks not speaking Engrish, and everyone had a relaxed and pleased look.

My trusty Garmin GPS had the Post Office as its target, and promptly steered me into a residence area for park workers, citing mobile home Unit 1 as the Post Office at 100 Mather Business Center, Grand Canyon. Not particularly helpful. A nearby resident aimed me in the right direction, and the signage helped. Once I arrived, it was the kind of place where you just wanted to look around. There was the Post Office, and a smallish sign in the lot pointed out that the south rim of the canyon was a mere 0.6 mile walk from there, along a wooded path!

I’d always kinda figured it would be an ordeal to get to see the Grand Canyon, but it was no big deal to at least access the center of the south rim. I was going to ignore it and wait until the Defiant began its Inaugural Sea to Shining Sea Grand Tour next year. But then I thought, what if I don’t make it? Life does have a way of intruding on even the best-laid plans. Then, I’d be really pissed for two reasons: not getting to collect on any of that Social Security I forked over, and not getting at least a quick peek at the Grand Canyon when I had the chance. Sporting a pair of Birkenstocks that are supremely comfortable except when the straps bore a hole clean through my skin, I figured I could make a mile, anyway. I had white socks on. You know, sandals with socks. It’s what I do. I’m in public, so I want to look my best. And, I had half a bottle of water in the Furd, and The Camera, complete with Shoulder Strap. 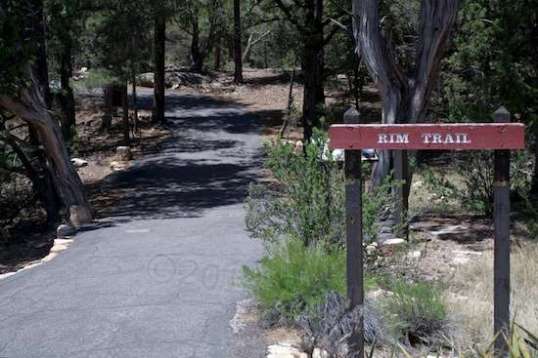 I was bravely telling myself I could do the distance, when a lady in a wheelchair pushed her way past me and said hi.

The path there was paved, clean and well-maintained, and the walk didn’t feel like half a mile. Then, bang. The path T-boned to the edge of the canyon, and although trees at the rim trimmed the number of viewpoints a lot, my reaction was a flip-flop. So many photographs of the Grand Canyon have been taken from the prime points at the prime times of day (sunrise and sunset), and then Photoshopped to pump up color saturation, that I was now looking at the natural haze within a vast basin, with most of the color comparatively washed out. Once I accepted that I had been looking at hyped crap rather than reality, I enjoyed the reality. That thing is immensely huge, and incredibly deep. 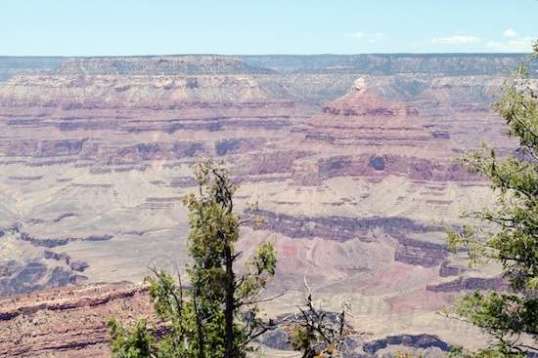 It’s one of those things that just doesn’t register in your mind as possible. You can look and look all you want. Take as much time as you like. You can move over there to look, and then back over here. Keep turning your head to eventually take in what you can. Moving just thirty feet makes a big difference, depending on which way you’re facing. I had the sense that I was seeing something that just wasn’t possible, much like the Blue Mesa at the Petrified National Forest, but on steroids, and then expanded in scale 100,000 times. There were benches there, and for good reason. 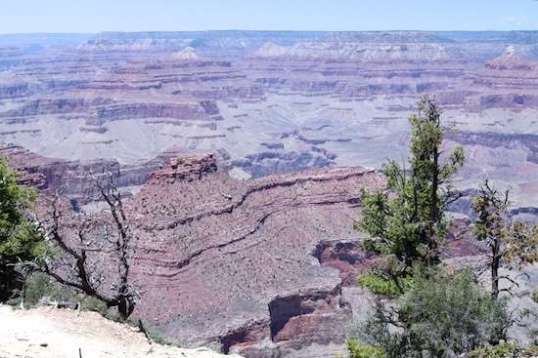 From where I was standing, I had the option of going left or right for a couple of miles – which I was not prepared to do. I couldn’t accept what I was already seeing anyway, so why kill myself to shovel in more right now? I was already at five pounds in a three-pound bag. I looked for quite awhile. I swung around the camera and took a few furtive snaps, which felt like I was making it a deliberate point to waste time and effort. Forget what you’ve seen. That isn’t the Grand Canyon. This wasn’t just beautiful or awesome. It was captivating, arresting. 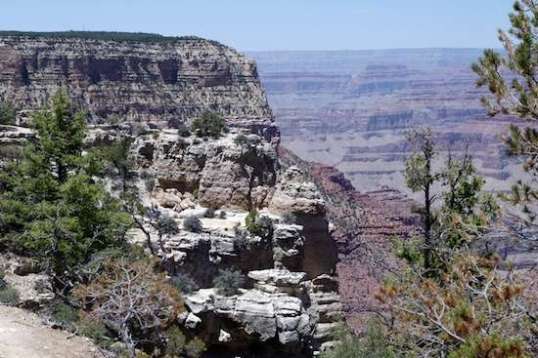 About this time is when I started thinking about the other viewpoints waiting to east and to west.

Then at last, I looked around me, noticing the people hanging around and going to or from the other viewpoints. There were a few young folks sitting out on a ledge, and one of them was playing a guitar. We B Jammin’, I guess. Maybe they figured the music would help others enjoy the view more. An older couple was trying to decide whether to cut and run, or hike to the next lookout. There was a pack of college-age boys and girls nearby, all of whom apparently saw all they wanted to see, and were on phones or simply talking together in little clusters, just blowing time. 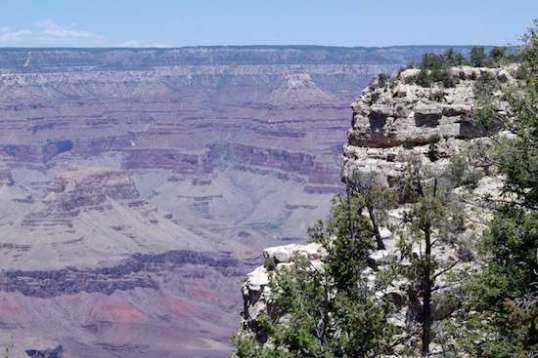 Does a dog or horse stop and think to themselves, “This is beautiful”? Why do we, do you think?

Then one young woman in sneakers and a scarf wrapped around her head in a quasi-middle eastern style was carefully picking her way along an improvised, unprotected worn path that wandered from three to ten feet from the true edge, pretty much right in front of me. When she hit the closest point early, she hesitated for a few moments, gathering her courage, and then pressed on after a couple of stalled steps. Naturally, I had four reactions to watching her: 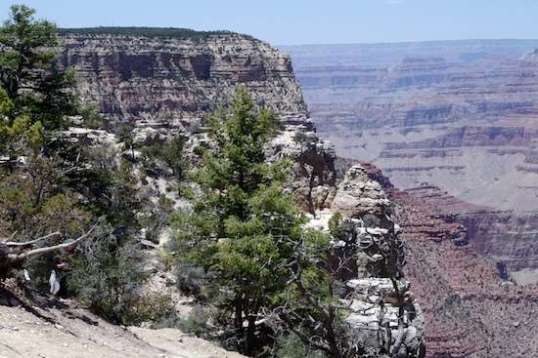 A tentative step and then retreat over in some bushes caught my attention, right near the edge. Bottom left.

1] With the realization that she was one “oops, my bad” away from a screaming drop of about thirty seconds or so, I couldn’t watch, and turned away so I wouldn’t have the possibility of such a sight burned into my memory. I mean, she was close, and she couldn’t weasel over because of a tree and bush preventing it.

2] Once she edged further from the drop-off, I thought to myself how much courage she must have, and wondered how she managed to get past that “it’s gonna suck me right over the edge” sensation that’s intended to protect us from unnecessary risks. 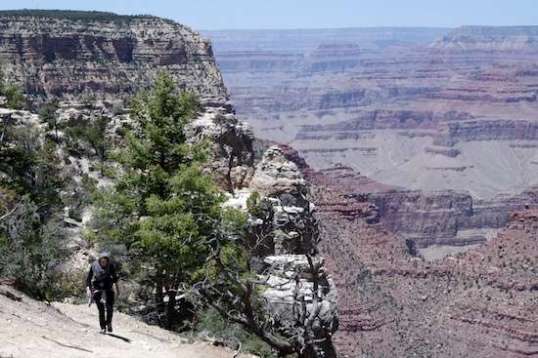 Made it, and slowly padded over and crossed directly in front of me. She kept her gaze to her feet and in front of her, never to her left.

3] I wondered just why she felt compelled to take such a risk. Yup, the odds were almost certain that she would make it, short of some unexpected blip of vertigo, misstep or gust of wind. Almost certain. Almost. But the price of “oops” here was a guaranteed and somewhat unpleasant death, not injury. This wasn’t about seeing the Grand Canyon, or experiencing it. It wasn’t about the Grand Canyon at all. I wondered if she feels “more alive” now. I’m obviously not conversant in thrill-seeking, but I do get why some people like to stunt skateboard, parachute jump, or what-have-you. It’s feeling the adrenaline and proudly mastering your fear. But in my mind, seeing how close you can walk to the edge of a one-mile drop is, well, proving to yourself exactly what? I’m lost here.

4] I realized that I am now officially an old fud. I’m okay with that, however. I’ve seen the aftermaths of enough accidents, and learned the unhappy results of enough “oops” to hold me for a good long while, thanks just the same. Now and then, the end legacy of the me-me-me thrillseeker is simply to leave the caring and the dependent in quite a fix, dealing with the loss and/or taking care of an invalid without any source of income. Whatever type of measuring stick you chose to gauge “a life well-lived”, it needs to leave you a little breathing room should things turn turtle. When things head south on you, you don’t want that same stick to signal you that life now isn’t worth living. Pressing on to new discoveries is how people grow.

Having taken my eyes off the vista, I’d now seen enough. I hiked it back to the plaza and went into the General Store, which is affiliated with, well, Affiliated Foods, Inc.  I was mainly after produce, which I eat a lot of now. It was like a cross between Whole Foods and Trader Joe’s. I saw funky, fun-looking stuff on the shelves that I wouldn’t expect to see unless I was from another country. Oh wait, that makes sense. There was also a significant emphasis on organic produce and dairy, maybe since our foods are so loaded with insect killers that nobody outside this country wants to do that to themselves, dirty anti-American socialists. I’d read comments left on the Internet that the prices here were like trying to buy beef in Tokyo, but it actually was a highly variable mix of “Wow, that’s cheap! I’m stocking up”, “Meh, 15% more than Safeway isn’t too bad”, and “Wow, they’d have to put a gun to my head to get me to buy this!”

On the way back, I breezed through “enemy territory”, the Grand Canyon Airport that’s an occasional aural wonderment. It’s actually a lot of tour outfits with both planes and choppers, and they were lightly busy at that moment. The helicopters all had their own landing areas on company properties, while the airplanes hit the single runway with some regularity. That was good for a few minutes’ amusement. I may bike over to take a few pics, weather and laziness notwithstanding. 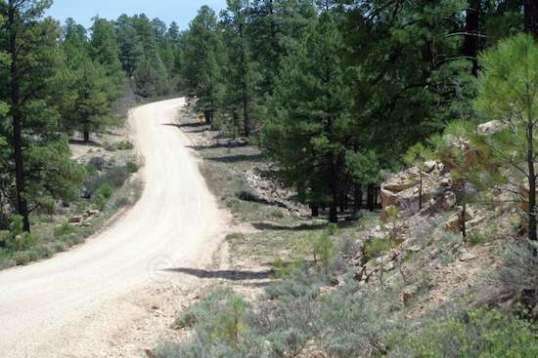 Returning back to camp is no Grand Canyon, but I like it plenty. 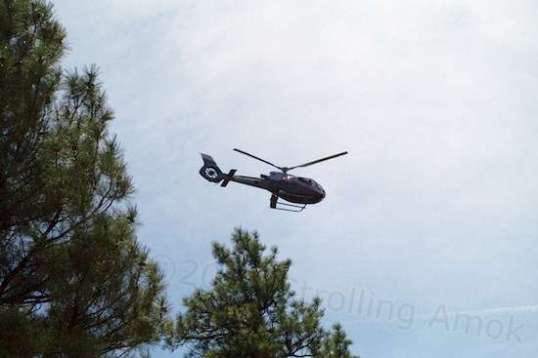 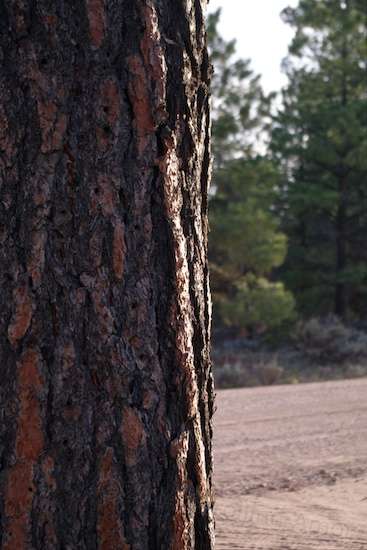 Near sunset, this sight keeps getting my attention each time I go from the office to the kitchen. Just something about the bark of a tree glistening as though it had been rained on. The camera has toned that reflectivity down as a “correction”, and I haven’t put it back. Texture!

11 thoughts on “Just an Interlude”