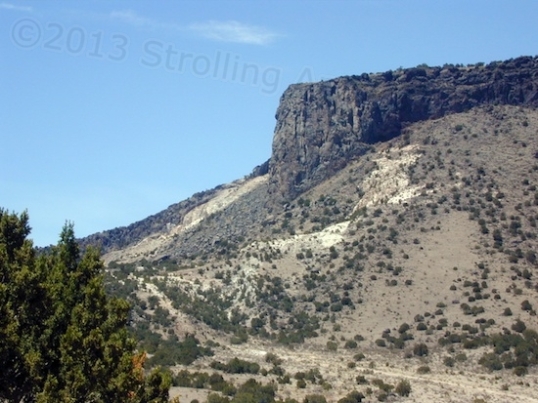 Highway 547 north of Grants, New Mexico affords many more interesting views than this – but I can’t drive and take pics when the road goes all over!

The Mt. Taylor Ranger District of the vast Cibola National Park is less than 40 miles from Bluewater Lake State Park in New Mexico. Highway 547 is torn to shreds in town, but once north of Grants, it winds beautifully through the mountains. Up I went, to my present elevation of 8535 feet, according to my GPS. For the geeky, my coordinates are 35.253806, -107.67122. Put those numbers into Google Maps, and you can see where I am. I’m actually on FR193TV, a short spur off of FR193.

I pulled over to get this one – a small cattle ranch in a valley.

Forest Road 193 was my gamble, and since it is a gravel road, I took a chance and just drove in without unhitching. FR193 is washboard gravel, but as there was no sign of other vehicles, I idled down it and noticed that the few workable spots were small and overshadowed by trees – real trees. They’re all scraggly pines, but these are the first real trees I’ve seen for a long time. The spur FR193TV offered a small meadow close by, so I tried it out.

Yep, there she is, parked amongst the trees. Can’t tell, but I’m shooting uphill – the trailer is quite level.

I’m forming an opinion that locals are tough on federal land. Between spent shot gun cartridges, shards of arrow shafts, and broken beer bottles all over, campsites are often less than pristine. After considerable maneuvering, I had the Enterprise parked as well as it could be, and it just wasn’t near level. Plus, the most level spot was blocked by trees. Good for staying cool, but bad for solar panels. I walked down further and found that the next spot had a better chance – with less glass on the ground.

It took some doing, and I’m not aimed for optimum sun, but the trailer is remarkably level and the panels will work okay at full-horizontal. Once I set up camp, I enjoyed the sound of the breeze overhead in the treetops. According to the weather forecasts, a windy day is coming up, but with the orientation of the trailer and the low canopy of nearby trees, I doubt I’ll have to rig for wind.

The left rear tire of the Furd, missing a chunk. I guess if you fully load the bed, put a thousand pounds on the trailer hitch, and muscle the trailer over rocky inclines, this kind of thing is quite possible. Not all half-buried rocks are rounded.

It’s really nice here, and I intend to stay planted until I move to a local RV park on the 26th, to take advantage of the laundry and dump station in prep for the final run. The only misgiving I have is that this is bear country. The literature warns of keeping a clean campsite and so on, but it really hits home when many of the trees and bushes close by have had their bark torn off. That’s how they mark their territory.

Between that and the cougar warnings, I don’t plan to hike or bike here. I’m a lifelong suburbanite, remember. Couple days ago, I read that two women went out bicycling in the high country of California (on trails like this), and one came back. The found most of the other lady. Cougar. Bears, they tell you to make a big commotion, and if you have to, then play dead. Cougars, they tell you to stay upright and definitely do not play dead. The brochures delicately omit why you don’t want to let it knock you to the ground.

One look around the trailer, and it’s obvious that nature rules here. Fortunately for me, I have a ton of records that really, really need to be recorded so I can get rid of ’em when I arrive in Marengo. So, I won’t be bored. But I do need to walk for my health, and we’ll see if I can confidently march along with a walking stick and a modestly-sized Ducks Unlimited knife on my belt. It isn’t easy being a sheltered suburbanite in the wilds!

Far too many trees show bearsign like this. Maybe I should bark a few with my hand axe and pee on them? Where are ya when I need ya, Matt?

At Bluewater State Park, I was surprised to see many mosquitoes out and about in the morning. Here, it’s curious bees, hornets, flies, and something big that I haven’t identified. Kinda looks like a small orange hummingbird, but it’s an insect and sounds like a B-24. Weird. At any rate, it is beautiful here in a real forest, and I’m enjoying the peace and quiet.