Driving Through the Badlands

[I have moved to a cellular-friendly location that I found on my own, so I’m resuming posting, but in the original sequence.] 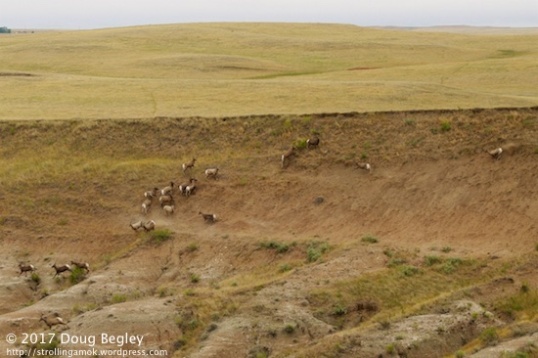 Emerging from the camper with a typical old-man groan, I instantly heard a rumbling. A herd of Antelope was apparently startled and dove off the plain down into the erosion, and stayed there until I departed!

Yup, With temps being forecast to be in the high 80s and low 90s for almost a week around Wall, I reluctantly decided to vacate the premises. I had considered doing a week south of the Badlands (in the vast grasslands that surround it) because a Ranger had recommended it for its wildlife, but livable weather has its priority with me. I needed significantly more elevation.

So I packed up and instead of making the short hop to Wall and I-90 west, I looped back down into the Badlands National Park in order to take advantage of the free hot shower, potable water and dumpsters available at the campground next to Cedar Pass Lodge. The Badlands Loop Road is nearly 30 miles long, so at the Park’s 35-45 MPH limits, it takes a END_OF_DOCUMENT_TOKEN_TO_BE_REPLACED 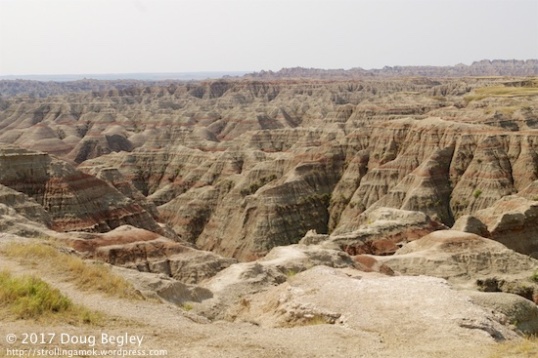 Sometimes it’s best to just show a place for what it is, and not distract with words. I haven’t been here for three decades, and although the people-herding side of the Badlands National Park has changed a lot, the natural features have not. 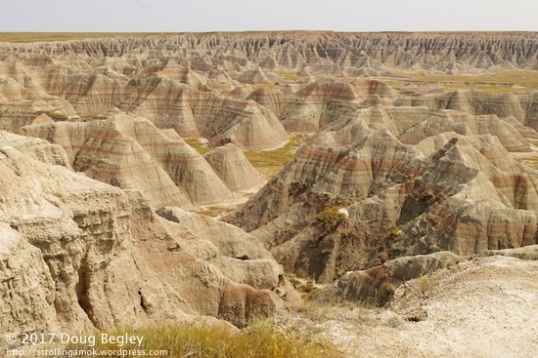 END_OF_DOCUMENT_TOKEN_TO_BE_REPLACED

Buffalo in the Badlands

I offer for your amusement this very brief video (about 40MB) which I captured with my Pentax DSLR on the road to camp.

During filming, the optical eyepiece is blocked out and the rear LCD display shows what is being captured. In bright sunlight, that’s a problem. I could only make out what was land and what was sky – pretty much, anyway. Afterward, stabilization in software helped with the result. Looks like I’ll be unpacking the ancient Canon digital tape videocam while I’m here. It has an optical eyepiece.

This place hit 85 yesterday, then a low of 48 last night. A severe thunderstorm skated past in the late afternoon and early evening, but it was far enough off to the south to merely rumble in the distance. The campground was pretty well packed out with young END_OF_DOCUMENT_TOKEN_TO_BE_REPLACED 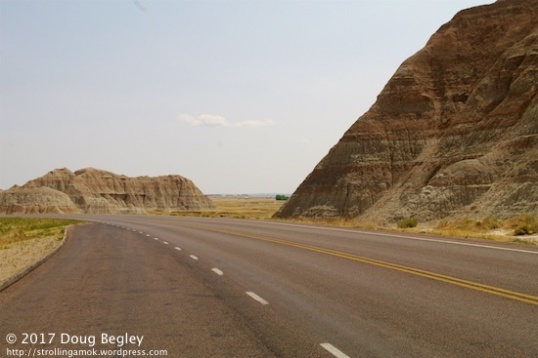 Not too much of this in Illinois, I must say. The scenery is great, but the lack of tire-swallowing potholes is a bit unnerving.

The start of the day saw the Mighty Furd being refueled at a Sinclair station, seeing as how it seems to like Sinclair diesel fuel best. In airing up the tires behind the station, their system got both fronts to 75 PSI, but the couldn’t top 70 after that. I could hear the inside air pump re-pressurizing the tank, but it didn’t make much difference. The station next door didn’t have any air supply, so I popped the Ford’s hood and hooked up my Viair pump to finish the job. The new ARB digital pressure gauge thingie worked better than I’d hoped for, but I’ll save that tedium for another time. 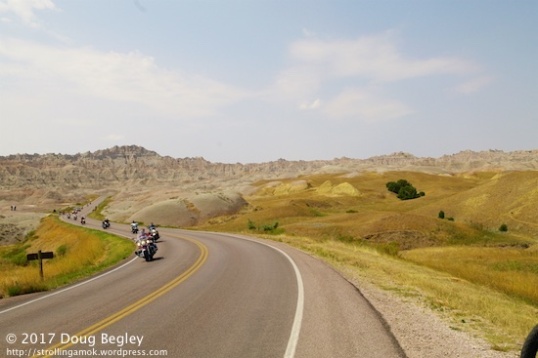 Did I mention lots of bikers?

After quite a few miles through Buffalo Gap National Grassland, I hit the eastern-most entrance to Badlands National Park. My America the Beautiful Senior Pass netted me entry and a very helpful brochure with map. This being a Wednesday, there were lots of visitors, the majority being refugees from the Sturgis Motorcycle Rally still ongoing. Most of the drive through the park is on the paved Badlands Loop Road, which has oodles of viewpoints distributed END_OF_DOCUMENT_TOKEN_TO_BE_REPLACED