This is what greets you at the museum’s entrance. Imposing.

Rapid City, SD is about a thousand feet higher than Wall and the Badlands. That means the upcoming temperatures would be 3 degrees lower there. The Black Hills National Forest is reputed to range from 5,000-7,000 feet, meaning that I could look forward to a 6-9 degree reduction. That can turn game-ending heat into mere mild discomfort, so off I went.

Before reaching Rapid City however, there was the siren call of the South Dakota Air & Space Museum, which is next to the Ellsworth Air Force Base in Box Elder. Yep, another aircraft museum. Can’t help myself, apparently. This one has its aircraft displayed outside, and you can be the judge as to what’s displayed. The inside is modest, relating mostly to uniforms, insignia, equipment, scale models, and a few specialties as shown in the photos below. The museum is free, though they do request donations via a big, clear Plexiglas™ box near the door. A 90-minute mini-bus tour of the Air Force base and a deactivated Minuteman nuclear missile launch site a few miles away is available for $9.

This being the first B-1B I’ve ever seen, what impressed me was the smooth flow of surfaces everywhere.

That bus left just as I arrived, and it would be an hour and a half until the next one began. I couldn’t take advantage of that tour, as I would need as much time as I could get to scout for a workable campsite in a very large area based solely on using one of four Motor Vehicle Use Maps. As I’ve mentioned before, approved camping roads on these maps do not even suggest that there are in fact any usable campsites along any given road. Most of the roads here carve along the sides of mountains, so finding a stub that diverts to something usable is a rarity. Add in a decent elevation, reasonable levelness, adequate solar exposure through tree cover, and an access free of diving through mud pits, and you’re looking at a long afternoon. When crunch time comes, cellphone coverage is the first item to be sacrificed. But that challenge would have to wait until after the museum! 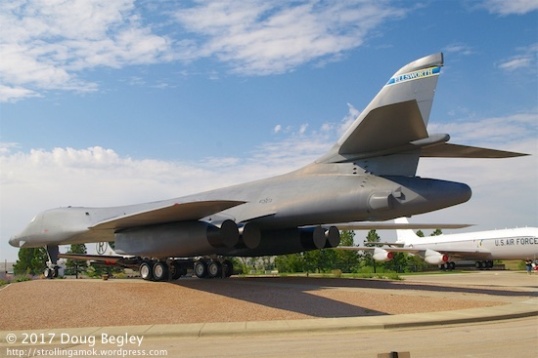 The wings sweep forward and back on the B-1B.

Though there are a pile of images here, these do not come close to representing all of the aircraft on display.  Forgive me if I have misidentified any airplanes in the photos. The plaques identifying each aircraft were temporarily missing due to a recent site revamp, and not having a printed placement program at the time, the appearance of a couple of planes made me think they were showing captured MIGs! Plus, the Air Force relabels each plane model it uses such that I often do not recognize the moniker they use.

One last shot. The B1 first flew in 1972 as an intended replacement for the B-58 Hustler and venerable B-52 Stratofortress, but the program was cancelled due to cost, a cruise missile that could approximate the same task, and greater interest in the upcoming stealth B-2. After a serious revamp, the program was restarted in 1981 as the B-1B, and production began. Now unmatched for payload and speed, they were redirected to conventional bombing in the late 1990s after the collapse of the Soviet Union. The 66 existing units are expected to serve until the 2030s. While at the museum, I saw one fly by overhead!

The B-52 Stratofortress, now long in tooth, first flew in 1952. It was designed to carry nuclear weapons, but has been used for conventional bombing since then and is not expected to end service until the 2040s due to its adaptability and low service costs. The airframes should be pretty well worn out by then, after an unheard of 90 years of service! Attrition these days tends to be from pilot error – hotdogging one of these gigantic late-1940s designs at low-altitude air shows can have consequences. 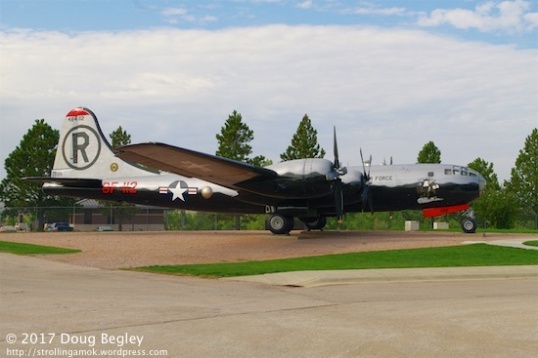 A B-29 Superfortress of WWII vintage.

A B-57 Canberra, striking to me because the fuselage appears to be angled down relative to the wing plane. Basically a license-built version of a British design, it was put into service in 1952 and used heavily in the Vietnam war. 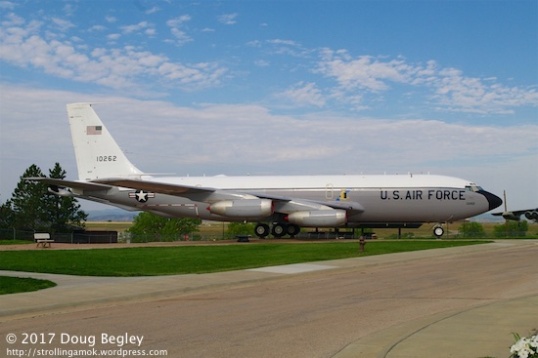 The EC-135 Looking Glass. Adapted from a cargo plane and in 1961, an airborne refueling station, these quickly morphed into command and control centers – 24/7 stations that could direct air and missile attacks on the Soviet Union in the event that ground-based stations were destroyed in a Soviet first-strike nuclear attack. 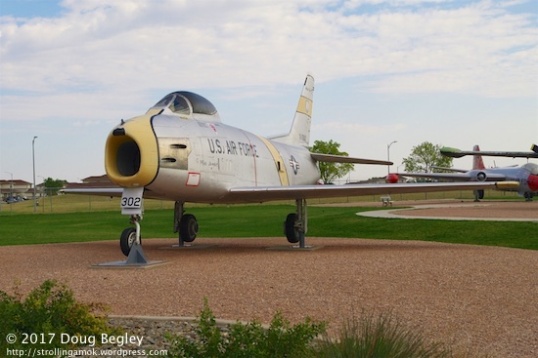 Thanks to alert reader Allen, who has corrected my misidentification, “this is an F-86F-2 Sabre. The F-2 variant is notable for having 4 20mm M39 cannon instead of the typical “six pack” of .50 cal M3s.” The F-86 was one of the best and most important jet fighter/bombers of the Korean War. Produced from 1949-1956, it’s best remembered for its unique ability to match the formidable MIG-15 in combat. It also happens to be the first American jet fighter to benefit from glomming WWII German aerodynamic studies made for their own fighters. As dogfighting ability was later to be downgraded according to official policy, it remained a better dogfighter than some newer fighters that superseded it. Actual combat conditions eventually exposed vulnerabilities in the theoretical dogma. 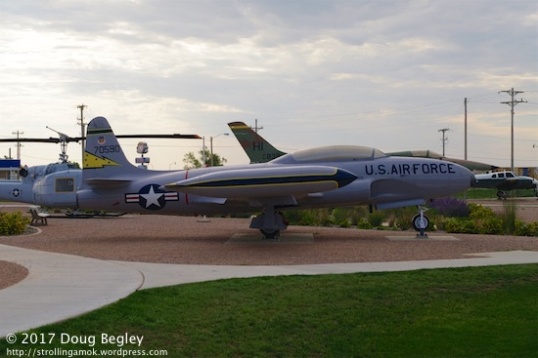 The T-33 was a 1948 trainer version of the P-80 fighter which first saw service in 1944. Though quickly supplanted by more advanced jets, the T-33 had a fairly long service history, including combat versions for export. 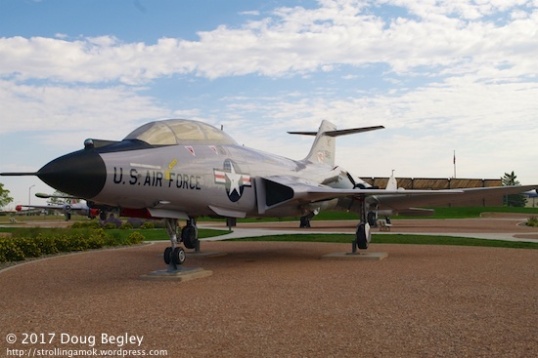 The F-101 Voodoo was a postwar design that first saw service in 1954. Initially designed as a bomber escort (like the P-51 Mustang in WWII), the B-52 wound up not needing an escort and its role was changed to fighter/nuclear bomber. Fast in its later iterations, it went through heaps of upgrades over the years but retained some dangerous tendencies, and was replaced by the F-4 Phantom in Vietnam.

The 1955 F-105 Thunderchief, designed specifically to render a nuclear bomb at Mach 2 at low level, was nicknamed the “Thud”. Armed with missiles and cannon, it conducted most of the ground attack runs in the early years of the Vietnam war, and was the only plane to be withdrawn from duty due to high loss rates (nearly half of the 833 produced). Able to carry three times the bomb load of the WWII B-17 four-engine bomber, “Wild Weasel” variants became the first suppression platforms against Soviet ground-to-air missile sites – which thus required them to be “first in, last out” for exposure. They were applied to the highest risk all-weather nighttime low-level assignments, with corresponding results. Though far from a dogfighter even unladen, they could down MIG-17s along the way. It had few vices in the air, but had a horrendous hours ratio between maintenance time and flight time, and was prone to quit in flight with reliability problems. Its high takeoff and landing speed of about 230 MPH also required long runways, limiting where it could be deployed. Its replacement was the F-4 Phantom.

The F-100 Super Sabre, serving from 1954-1971, was the first USAF fighter capable of level supersonic flight. Plagued with operational problems, it was converted to ground attack missions in the Vietnam war and was replaced with the Mach 2 F-105 Thunderchief. In later life, it was not used as a trainer, as recovery from a spin was not possible.

The T-38 Talon, produced from 1961-1972, was a popular supersonic trainer that is still in service today. Its small size and weight (less than 12,000 pounds fully loaded) make it a fast and nimble flyer that was later adapted to make the F-5 Freedom Fighter as a low-cost attack aircraft for export.

The f-111 Aardvark first entered service in 1967 and had a nasty reputation until significant teething problems were finally resolved. It was the first production aircraft to use variable-sweep wings, afterburner turbofan engines, and terrain-following radar for high-speed low-level flight. It was designed to take over the role of the F-105 Thunderchief, but without the need for long runways. Since the shoot-down of the U-2 spy plane over the Soviet Union in 1960, emphasis shifted from high altitude nuclear delivery to low-level entry that made defensive missiles much less effective. Then-US Secretary of Defense Robert McNamara insisted on a shared platform for both Air Force and Naval carrier use, which never panned out due to conflicting needs. The resulting plane was relegated to land-based use only, as it was completely unsuited for carrier missions, landings and storage. That use ultimately fell to the later F-14 Tomcat, which could dogfight. Early malfunction crashes during tests in Vietnam nearly killed it off, but it began to show its prowess later on – its main strong point being that it could carry the bomb load of four F-4 Phantoms in one trip, with minimal losses. Later wars and air strikes would prove its capabilities, particularly in Operation Desert Storm. The F-15E Strike Eagle eventually took over its role as a precision strike aircraft, while the B-1B Lancer took over its supersonic bombing missions. The Air Force finally retired it in 1996-1998. 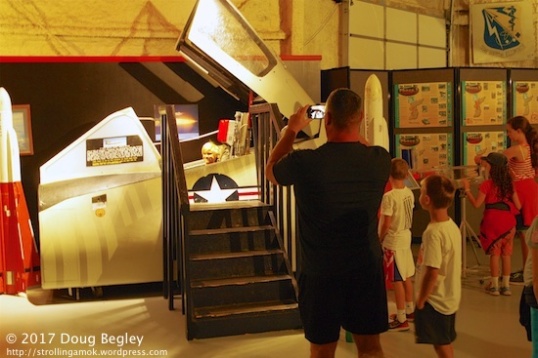 There’s nothing quite so appealing for kids as a quieted-down version of a real flight simulator. It saw a lot of action, I can tell you.

Part of a four-station flight simulator for the B-1B bomber, which is loaded with electronics. This one has the ability to introduce all manner of troubling problems for the crew to deal with. Better here than in the air with the real thing.

One half of the command console system once used for launching a Minuteman nuclear missile – as necessary. Thankfully, except for a couple of system false alarms, that job stayed boring as hell. Remember having to sit on the floor out in the grade school hallway, for practice nuclear attacks? That supposedly would limit the effects of the pressure wave (causing building collapse) and the incinerating fireball that would quickly follow. The fun factor of those drills was pretty limited.

The guy behind the counter told me that this is a Titan II ICBM, installed in its carrier with a crane just the day before! First launched in 1962, it could carry the largest warhead in the inventory and was later developed for launching astronauts into space. This display unit lacks the warhead at the other end, which is probably a good idea.