Since I have a few days before the annual trek to Illinois to see kit, kin and the usual medical facilities (a hobby I do not recommend), my choices came down to staying at Mormon Lake or seeing bits and pieces of Historic Route 66 along the way. Not that tough a choice, even for the indecisive. After hit-and-run errands in Flagstaff, I picked up Route 66 there and began on Townsend-Winona Road, which used to be an earlier version of 66. That was not a pulse-booster, since it was a wide, smooth highway meandering through the forest, and it’s still in full use. Then you have to get on I-40 and head east.

I’m using a set of printed maps by Jerry McClanahan and Jim Ross via Ghost Town Press to navigate 66. This is not as easy as it sounds for a driver sans navigator, since the handy turn-by-turn instructions are nearly useless in my situation. You need a devoted navigator. Otherwise, you’ll be pulling over frequently to look at the directions and relate them to where you are, or think you are. The better option is a GPS download from River Pilot, but that relies on one of two Garmin models no longer in production, but still available for about $325 to start. Yow. There are many, many guides to tourist traps, but workable GPS routing seems to be limited to this one.

So I took the affordable but laborious tack of locating each significant point on the route and finding it on Google Maps, then picking a suitable point there and finding out what the GPS coordinates were. What I wound up with is a set of printed directions, but one which relies on letting the GPS steer me from point to point. So far, it seems to work pretty well as long as I ignore advice to get on the Interstate before the proper time. With the GPS set to “shortest distance” rather than “fastest route”, and the points selected well past intersections, I haven’t had any proddings to back-track so far.

The thing to note about all Route 66 instructions is that they are geared toward International visitors touring by car and wanting to see as many former and current tourist traps as possible, and in a linear fashion. No rough roads, no dead ends, no big delays. Do the trip, see a lot of stuff, and make progress so that not much time is used up choking on dust in the middle of nowhere. Thus, these guides are cleaned up to take later 66 routes (it changed constantly since the start to make the trek less of a challenge to man and machine), but at least the maps I have mention older paths, and paths which were indeed the real 66 but may be impassable now for one reason or another. As a result, you’re on an Interstate most of the time, simply because it’s impractical to accurately retrace much of what’s left of Route 66. In the Southwest at least, much of the land that Route 66 ran through at one time or another is either privately-owned now, or there just ain’t any road or trail there no more. You’re on what now amounts to a series of dead-end spurs, so your interest level and goals determine how compulsively you’ll want to drive every last dirt path or hit every 1950’s-themed business. So driving the Mother Road means different things to different people.

Me, I’m interested in retracing the earlier 1920s-1930s routes, but don’t have nearly enough time to do that. One enticing section that switchbacks up a mountain and posed such a threat to radiators and brakes in the 1920’s, you now need high-clearance 4WD and apparently also need a permit issued by a tribal council to take all the way through. So, I’m taking the Smooth & EZ path per the maps, with a few variants and potential dead ends thrown in. A planned average of only 90 miles a day allows me to do that. I’ll be goofing around like that until I make it to Tucumcari, New Mexico, where the long-distance voyage begins in earnest, kinda.

Today’s journey was from Flagstaff to Winslow, Arizona. Way too much of it had to be run on I-40, though I did take Exit 230 to visit a deceased tourist trap in Two Guns. There isn’t and probably was never any actual hamlet there, but the map purported the rock foundations of some kind of zoo and an “Apache Death Cave” there, on private property. I stopped at a shack at the outskirts, however. This is Indian Reservation land. A long-abandoned “Kamp” or campground building was in the distance at the end of a narrow driveway, which I chose not to take. Faraway memories began to swirl vaguely out of the mists of time, reminding me that the Apache Death Cave was probably a shallow hole in the ground, accompanied by a story most charitably described as blarney. The tour map advised to stay on I-40, but I chanced fate since my GPS confidently indicated that Old 66 ran all the way to the next Interstate exit. I found just a short distance in that this was both true and not true. The roadbed was still there, passable and covered in fine gravel, but a closed gate prevented continuing on. 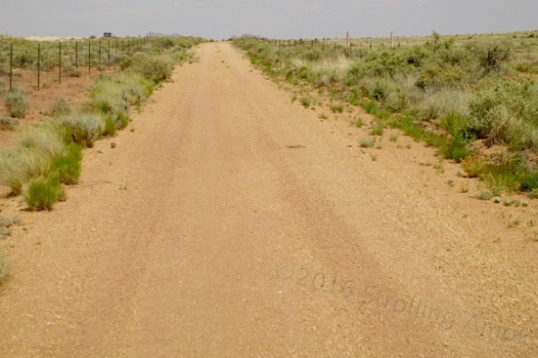 Yep, this is Route 66, but the pavement has been graveled over.

But there comes a time when wanderlust is dampened by a gate indicating private property.

Out of curiosity, I backtracked and hopped on I-40 to the next exit (Meteor Crater) to see what the other end of that section of 66 was like. Back toward the direction I’d come, that other end was posted no trespassing, while going further eastward held a closed gate with a no trespassing sign. Ah, well. At least I saw a cow crossing the road for my trouble

The other end of the 3-mile piece of 66 is restricted to foot traffic only.

My timing was just perfect, in that I caught this cow crossing the road towards Meteor Crater. Does it get any more exciting??? I think not. You saw it here first.

I could have headed south to actually view Meteor Crater itself, but the day had involved more financial transactions in Flagstaff than I prefer, and the $18 fare to survey the massive hole was not on my Imperatives List. I got back on I-40 and meekly headed for Winslow. I have no interest in seeing the somewhat famous mural there painted to commemorate the town’s mention in a ’70s song, and parked on the median of the split four-lane 66 at the far end of town. Overnight stays are allegedly permitted at this small civic park devoted to the 9/11 tragedy, where they have two twisted beams from New York’s Twin Towers, as well as a flag from the Pentagon. 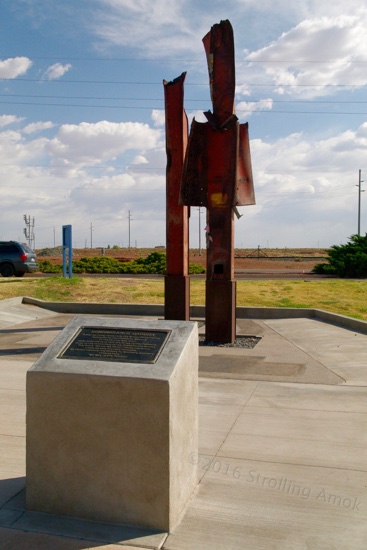 It’s a tiny park, but meaningful. 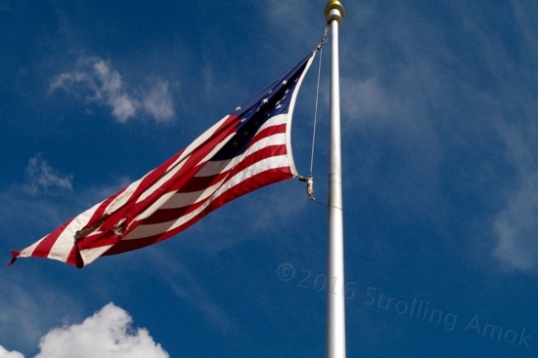 The flag from the Pentagon. These colors never run.

No map says so, but I believe that Route 66 comes into the west end of town on a road that makes more sense than the bright and shiny four-lane that’s signed as 66. It just looks right. They merge a short distance in, but the highway I backtracked on is festooned with ancient, dead ex-touristy businesses. The new version is clean. Winslow itself is still a fully viable town, though it’s littered with boarded up businesses that had obviously reemerged a few times, like a building with “Jewelry” painted across its steep roof, but that faded a bit with age and was painted over with “Rocks”.

Curell’s Bargain Barn along what I’m convinced is the true entry of 66 into the west end of town. R.I.P.

A motel in the same area, which is in operation and might actually be affordable. Who knows?

The eastbound half of 66 enters Winslow’s downtown.

The 1955 Falcon Restaurant, still quite busy even today at about 4 PM.

Tomorrow’s trek from Winslow to Sanders should be markedly different than today’s run, with less I-40 and more uncertain vestiges of the original Route 66. I’m not sure that will be interesting reading, but the drive itself should be engaging.