When Your Eyes Are Bigger Than Your Bike Trailer 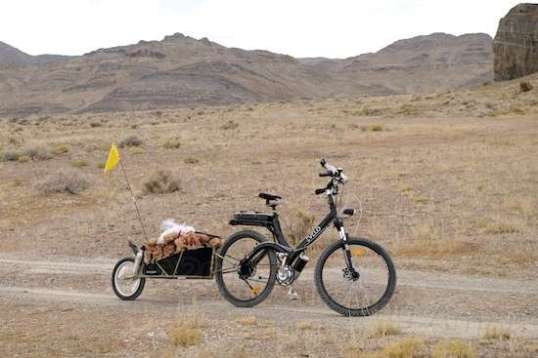 The Pack Mule still looks wonky, but at least is more at home in the outlands.

I did a grocery run into town yesterday, a trip taking an hour each way, not including the dawdling and looping around in the store to locate things. I found everything I needed though, and then some. Meat, produce, fruits, eggs, etc. Of course, I needed to replenish my supply of Carlo Rossi’s Paisano Fine Table Wine. I’m not sure what vintage it is, since it’s $13 for a glass 4-liter jug of the stuff. Red wine. Good for the heart, you know, unless of course you drink all of it in just a few sittings. I even found some sunscreen rated at 100, just the thing for if one of the scheduled Bonneville Speedway events isn’t rained out. Unfortunately, they had a sale on Coca-Cola. If you bought six 1-liter bottles, the price dropped to $1 a bottle. I was helpless to resist.

In the store, I quickly stumbled into three people wearing “Venturi Buckeye Bullet” T-shirts, who have their racing vehicle parked in one of the hangers of the defunct WWII airport at the fringes of downtown Wendover. They said they were waiting out the weather for a bit to see if an FIA-certified land speed record attempt could/would be made. What’s notable is that their narrow four-wheeler is entirely electric, and in a previous incarnation has topped 320 MPH in the past. They sounded like they were sitting on an updated design, and had their hearts set on 400 MPH. These guys (and gal) are obviously packing some serious watts. Personally, I am very optimistic for electric-powered vehicles in this setting, since short bursts of extreme power levels is their forte, much more so than long-distance runs. By the way, they mentioned the special race events for electric motorcycles at the Isle of Mann, so they apparently get around. This is an interesting place, come August!

Once I was back out in the hard reality of the parking lot with my e-bike and trailer, it became apparent that I’d completely forgotten about owning a rear rack and basket upon leaving the campsite. Oops. Oh well, no turning back now! At least I remembered to stow my insulated carry-bag that I used to use for keeping photographic film cool in the field. In that went the frozen items, and those refrigerated things that don’t do so well after an hour’s exposure to hot air and sun, like eggs. Didn’t want any hatching upon my arrival home. I wanted 10 pounds of ice, but all they had was 20-pound bags at the same price. Half of it went into the bag just before loading. Whatever survived of the rest would go in the camper’s refrigerator, which is struggling in Wendover’s 90-96 degree heat. Adding room temperature items really plays havoc with it for a full day afterward.

Anyway, all the stuff made quite a vertical pile, but the elastic cargo netting I’d gotten did contain it all nicely. I guessed I might have at least 50 pounds jammed in there. The Ibex’s Greenfield kickstand really saved the day here since, once fully loaded, the Aurora’s kickstand didn’t stand a chance. This thing wanted to turn turtle in the worst way, and the Greenfield put a blunt stop to it. The Ibex has three spring settings on its rear wheel, and I tried to move it to the medium setting, but it wouldn’t budge. I lifted the load off, but it still hung up. Hmmm, needs a little lubing and “persuasion” back home to get it to play nice. B.O.B. cautions against bottoming out the suspension, so I noted how much of the available movement was taken up by the static load, how much was left, and what I’d be going over on the way back. Check. Its current 25-pound load setting would probably survive just fine. I strapped the remaining ice on top of the Aurora’s battery pack, and rolled out.

Holy crapola, this assembly had a life of its own! If I didn’t breathe, pedal or steer, it was okay. Heavy, but okay. But correct for balance, tilt over slightly in the action of pedaling, change direction, or even correct for a pebble ticking the front wheel a little off to the side, and it was exiting times. Maximum deviation was half a lane. All that weight and its height was causing a lot of structural flexing from side to side. Some was in the trailer itself, and I suspect some was in the Aurora’s thick but unsupported rear frame stays, causing the bike’s rear wheel to steer a little on its own.

Needless to say, the trip home was a dance of precision. Go much below 7 MPH, and the wobbling load at that speed required steering corrections to maintain balance, which was a no-no. Let it coast above 13 MPH downhill, and the flexing motions became increasingly hard to control. Pedaling had to be passive, as non-energetic as possible, or the small side motions of the bike would cause the load to wobble almost out of control. Sheesh! I considered myself lucky that I didn’t dump it.

So, I managed to keep it at around 11 MPH the whole way. For it’s part otherwise, the Aurora’s drivetrain dealt easily with the load, including a steep local overpass over I-80, taken without pedaling. And at the end of the 18-mile round trip, battery depletion was minimal, barely registering on the meter. Once back at camp, I broke out the electronic bathroom scale and found that I had a documentable 80 pounds onboard, plus what I’m estimating as 20 pounds of additional groceries that the scale wouldn’t accept. The trailer’s absolute maximum rated load is 70 pounds, and here I was popping around 100. No wonder I was having a wee spot of trouble! I made a mental note to: 1) remember the basket next time, and 2) not load up on heavy items just because they’re On Sale! But hey, I made it, and I’m eating well!