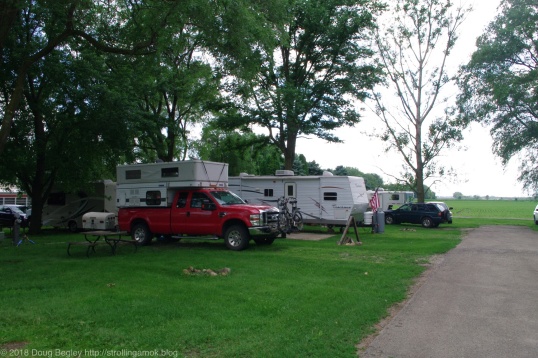 Usually, I’m fighting for full sun. With hookups and seasonally high temperatures, that quest has reversed.

The day went like clockwork despite uncomfortably high temperatures and humidity. After an hour of unbridled joy at the dentist’s office, I got to see my son and his bride as well as a grandson and new-to-me granddaughter who smiles incessantly, at least until it’s naptime. Absconding with way too much mail and packages of stuff I’ve ordered for repair and replacement, I took off to load up on groceries and pick up an inline water filter.

Then it was off to Lehman’s Lakeside RV Resort in greater metropolitan Marengo. Since the Fourth of July weekend is coming up, finding a spot to stay for a month straight was problematic, but they found one for me. $480 for the month plus a $300 deposit. They’ve apparently had people running over electrical boxes, sewer connections and such. The only downside is that they refund the deposit with a check, which in my case requires a trip to my bank an hour away in order to cash or deposit it. You don’t want to schedule a heavy departure day of driving then.

I’ve stayed here once before, and it’s a pretty good RV park, all in all. I was able to get a slot under trees in order to get shade for a goodly part of the day. It’s also within striking distance of some very nice bathrooms and showers, as well as a $1 laundry room. The WiFi has been a tragedy in past years, but for some reason it’s up and running just fine now! Water here is loaded with rust or iron, but that’s what the filter is for, and it seems to do good things so far. A pressure regulator is recommended. The ancient power boxes have been updated to 30-amp plugs, but they had to sacrifice the old 15-amp household-style plugs to do it. Lacking an adapter for that, they lent me their last one, but since they frequently need to use it for other things, I agreed to go back to the local RV store to get my own tomorrow, and return theirs.

That’s do-able if the rain allows it. I managed to finish setting up a couple of hours before heavy rains blew in, and rain will be a fairly consistent feature this week. That could get interesting, with over 2 inches due today and another half-inch tomorrow. This place has flooded before, but the sites are raised with gravel, and the drive out is pavement. Hopefully, I won’t have to put my old army boots to the test. I think I made them waterproof. I think. Regardless, the rain also dropped the air temperatures 20 degrees, so my whining about that is at a temporary end! I’ll have to find something else.

I’m beat, but it’s been a good day. All I need to do from this point on is rattle my way down the to-do list, weather and circumstance allowing.