The West As It Should Be 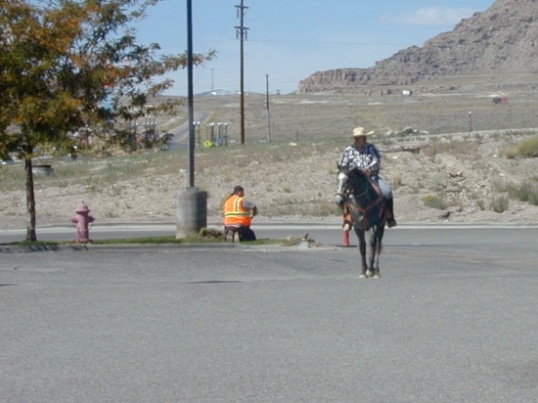 Just coming into the West side of town…

I was in West Wendover, NV for some propane, groceries, and tie-down rope when I saw a gentleman of the Old West persuasion just clip-clopping in on Old Paint. It might be more accurate to say he was a caballero on old Diablo. He got my attention of course, especially since he was mainly keeping to the concrete sidewalks beside the 4-lane, 35 MPH paved roadway. 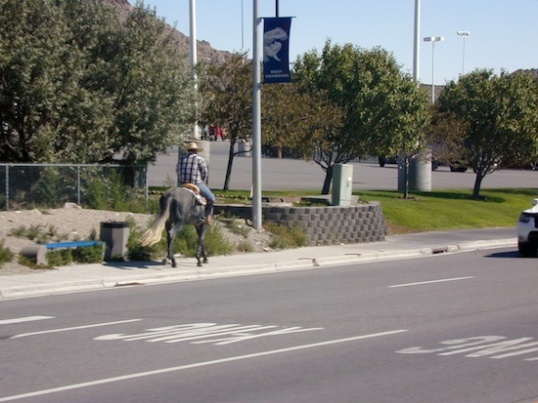 Despite numerous semis, campers, and speeding cars in close proximity, his horse kept its cool.

Now that’s how to come to town to shop. Actually, he was aimed for the casinos on the main drag, which is where all the vehicular action is. I was curious about whether he was actually heading for Wendover, Utah, which starts about a quarter-mile from where I saw him. Much more horse-friendly there.

My reality was that there’s a wind warning today “in excess of 45 MPH” which will peak at 6PM. It should be okay because the worst of it will be directly into the south or panel side of the trailer, but a shift to the northwest is likely late this evening, so I came up with a makeshift but effective way to rapidly tie the panels down flat against the side of the trailer if needed.  One would think that a south wind straight into the paneled wall would tend to lift the solar panels up and over, but it seems that when the panels are inclined down at about 30 degrees (their normal working height), their leading edges want to move down more than trapped air underneath them wants to move up. It’s apparently a leverage thing.  All bets are off in a northwest wind, since it’s approaching the first panel from underneath. Fortunately, that wind is supposed to be slower, so in theory, it should be no problem. The tie-down rope is just in case reality overrides theory.

I tanked up on propane while in town at the only source available, a KOA campground. At $4 a gallon, it’s close to double the prices in Quartzsite.  I won’t be looking forward to dumping the waste tanks here in the next day or few, either. The $15 cost is a bit more than the usual $5-$10. Unfortunately, they appear to be the only game in town for that.

The salt flats? It still looks hopeless to me as far as drying out goes, but neither remaining club has cancelled yet, mainly because the first of the two is still almost two weeks away. We’ll just have to see! At any rate, it’s a three-day haul to Quartzsite, with ample opportunity to stretch that out as needed. No need to get there now, since it’s 100 degrees and won’t be livable until mid-October!

2 thoughts on “The West As It Should Be”