The Glory of the Authentically Tacky

There remains an abundance of gaudy, cheap and tasteless products available for Americans to purchase today, the difference from the former times being that not a speck of them are made by Americans today. As a result, they are cheaper but no less profitable, their manufacture being made possible by record levels of low quality, and by virtual human slavery in foreign sweatshops, or by prison or child labor. These products, which promise to fill a gaping hole in our various vanities, then invariably break, tear or unravel within days of use, and ultimately serve as mere fodder for the local landfill. They are dread wastes which cater to the relentless weaknesses of the undiscerning. 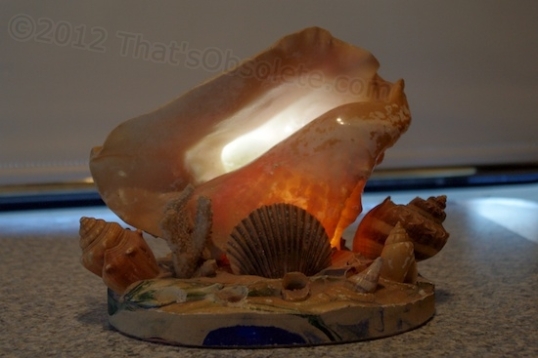 I now use this gem as a nightlight, and it makes me smile every time I look at it.

Like a truly custom-tailored suit, a hand-rolled cigar or a fine aged wine, a few products withstand the test of time. When tourist paraphernalia comes to mind, pillows, drinking glasses, and pot metal medallions of vacation spots were once sold in abundance. They were tacky when they were made, and were sold to those with bad taste while they were in a weakened state. Some types of objects were less offensive to the sensibilities, serving as low-grade badges of honor. For example, window decals of states and vacation areas have actually become popular to apply today in the rearmost side-glass of vintage station wagons. They are appropriate and authentic, since they are not recreated imitations of the real thing. 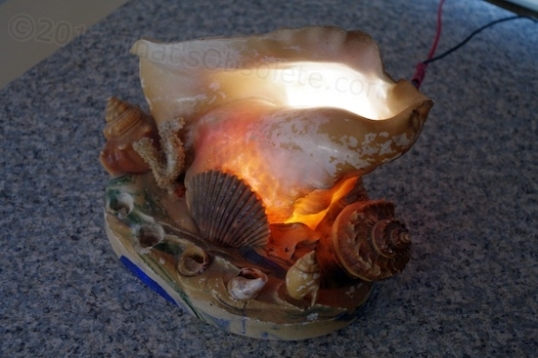 Packed with delight, this little find bathes the living area with the warm glow of tourist-trap regret.

Although the practical limits of my chosen lifestyle prohibits me from delving deeply into materialism, and the transition to it forced me to discard many things dear to me, I found it utterly impossible to part with one rare treasure. I made a token effort to offer it to my children of course, but neither of them wanted it, which was a sign to me that, lo, it existed in this mortal plane to delight only me. The fact that it is a tacky lamp is not especially notable. It is a construction of conch shell and other lesser shellfish, arranged in a cast base and illuminated internally with a night light. It was no doubt sold in a run-down roadside shop near – but not at – a seaside location. 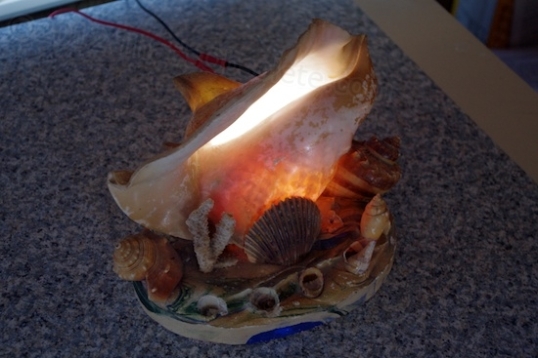 A feast for the eyes. Really, what more needs to be said?

What makes it so dear? The fact that this is no molded plastic simulation, no faked reminiscence of the quiet glory that such tasteless products once held. It is authentically tacky, and this genuineness swirls through it like the oak timbre of a decades-old double malt whiskey. No detail has been spared. Its sculpted plaster base is painted with the color of sand, interspersed with waves of sea-blue iridescence. It is encrusted with real shells, and the fact that a few of the lesser ones have departed or broken off with the passage of time simply underscores its visually rewarding aura of glorious authenticity. Plug it in, and it is a night light par excellance, bringing with it visions of the adventures of times past even to the untraveled person beholding it.

Of necessity, it has just been updated with a small 12-volt LED bulb, since I felt eerily compelled to enjoy its quiet radiance even while encamped in the desert wilderness which is my winter home. Thus outfitted, it can be left on full-time without the slightest concern of exhausting the battery it draws from. Its soothing glow is an inspiration and a lasting testament to the timeless tastelessness of those generations which have preceded us. I hope to bask in its aura for many years, and yet I am certain that, at my passing, it will remain a beacon of understanding and enlightenment to those who press on to explore the expansive boundaries of this mortal life.

2 thoughts on “The Glory of the Authentically Tacky”