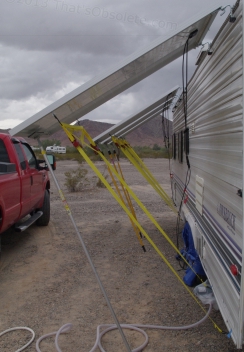 Not gonna risk these babies in a windstorm.

If you read my previous post on the coming “Winter storm” as the radio calls it (it’s 66 degrees right now at 3PM and the first rainfall is due at 4) then you know I was planning on watching the solar panels to see if they had any tendency at all to lift when the wind picks up from what feels like 30MPH right now. It’s predicted to pick up some more. The desert around Quartzsite is noted for occasional high windstorms (some say 50MPH+), and today’s are

a head-on blow directly against the side that the panels are mounted to.

At 1PM, I decided that it would be better to improvise a backup solution now rather than take the risk of watching a problem surface and not be able to do much about it. Keep in mind that a lifting panel could destroy not only it, but also the mounts and possibly the wood structure and aluminum skin they are screwed hard into. Repairing and replacing out here would be quite a trick. This ain’t your driveway.

So, I headed for the local bazaar tent and hardware store to pick up some eyelet machine screws for the solar panel frames, eyelet wood screws for the bottom wood frame rail of the trailer, and some deliberately-cheapie ratchet straps. Unless I put eyelets into the trailer’s steel frame, even this system isn’t Amaggedon-proof, but in combination with the ground stakes on the poles, I think lift force would have to approach a couple hundred pounds, which isn’t going to happen anytime soon. I think that the mounting hooks at the top end of each panel are nicely trapped.

Some care must still be used with this double system. When the trailer gets a gust of wind, it rocks, and each panel pivots very slightly on its roof-mounted hinge. The support pole on the far end of each panel is tied to the ground however, not the trailer. So, the trailer and panels don’t move in perfect unison. As a result, the straps need to be only lightly and evenly tensioned in pairs to avoid exerting big bending or twisting stresses on the tempered glass panels. Gravity does the main work, and the straps are there in combination with the pole anchors, just in case. I could have gone to one near-central strap per panel instead of two, but time was of the essence, and each frame already had existing twin holes.

I agree, it’s pretty ugly to look at, but I’m not here for the travel trailer beauty pageant! Listening to the wind tear and feeling the trailer jostle is fine with me, but repeatedly looking out the windows to nervously check on the solar panels is not my idea of a good time. Issue addressed.