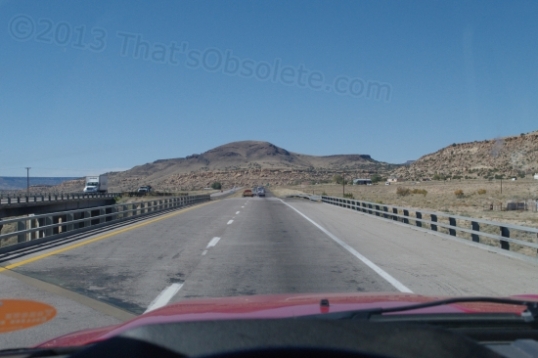 The first geological eye candy in New Mexico appears ahead.

On Monday afternoon, October 22nd, I was hell-bent on making it to the Petrified Forest National Park before it closed. Why? Nothing was on the GPS, since there are no towns or major roadway intersections nearby. Just an exit number. Old school. Miles-to-go and travel time unknown. I knew I’d have to get to my intended camping area, a gift store parking lot outside the park limits, by driving South through the park, a distance of some 28 miles at low speed. And that single path would be gated off at some uncertain time.

I’d spent an impressive, if not scenic, morning gaining more and more altitude as I worked my way westward. An endless round of stair-like hills posed no problem for the F-250’s twin turbos, but the price was a dismal average of 8-9 MPG. At last the climbing stopped, and the first inspiring scenery presented itself before me. After awhile, I answered a bladder call and pulled over at a rest stop along I-40. It was a puzzler, as a dirt road town a mile away presented a large cluster of small adobe houses with no apparent access to the highway. A row of abandoned wooden vendor shacks sat behind a wire fence right in front of me, along with a sign prohibiting vending. A sign marker identified the location as

the Laguna tribe of American Indians. 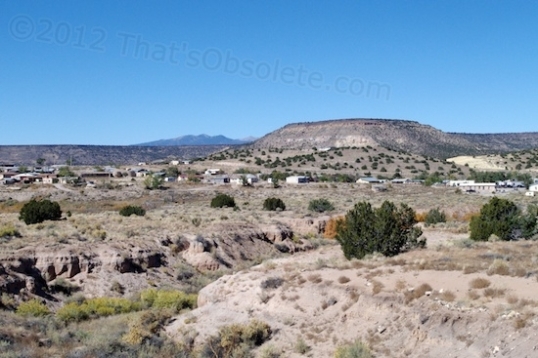 An interesting town, but you can’t get there from here!

The sign pointed out the Spanish mission church of San Jose de la Laguna, built about 1706 by one Fray Antonio Miranda. Apparently made of adobe too, it had been repaired numerous times, the most recent being 1977. With claimed interior walls of whitewashed mud and a dirt floor, its ceiling is a herringbone pattern of finished wood.

From this distance, I could barely make it out despite its large size. I had only the wide 18-55 lens on my camera, and both my telephoto lens and my binoculars were packed away in the trailer. 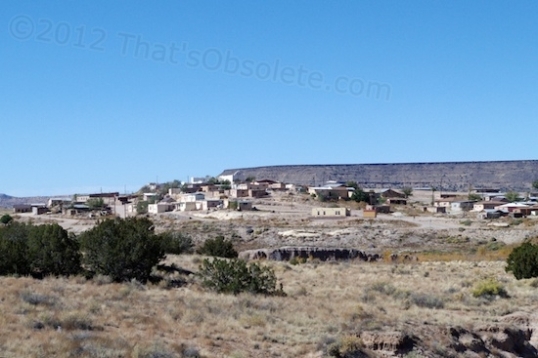 Oh, I think I see the mission church at this point, revealed here just to left of center.

The town struck me as impoverished, since it looked to have remained somewhat unchanged since the 1700s, and the citizen’s entrepreneurial spirit of outreach had apparently been dashed by The Man, in the form of the state’s Department of Transportation. It looked fascinating and I had an impulse to head over there, but there appeared to be no convenient way. The scale of its unpaved streets seemed to make the idea of hauling a 26′ trailer through them a bad one and, the clock was ticking. 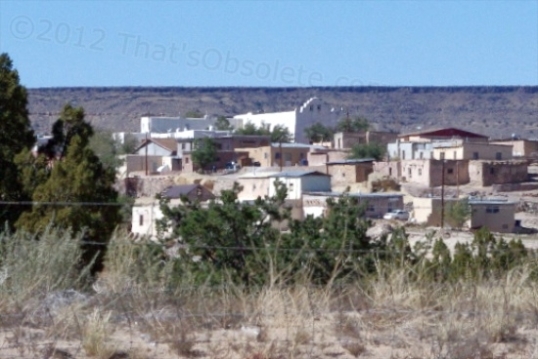 The San Jose de la Laguna Mission rises above everything else.

Something in me wanted to go there, but it appeared to be an impulse whose time had not yet come. I pulled back onto the Interstate, and kept an eye out for a nearby interchange. Nope. There were a couple after some miles, both including casinos under huge white vinyl tents.

I pressed on with my old school navigation methods, and enjoying the mountain scenery. At last I crossed over into Arizona and kept an eye out for Exit 311. Lo and behold, it appeared and I took it. It was an access road to the Visitor Center at the North end of the Petrified Forest National Park. Some distance in was the parking lot for the building, and I got the oddest mini-thrill simply by catching first sight of the building itself. Regardless of when it may have been built, the architecture and signage were so “modernistic” 1950s-1970s that I could have seen exactly the same thing if I’d visited as a small child, and been impressed with how futuristic it appeared. Being so used to Illinois pavement, even its parking lot impressed me. Generously sized, smooth, and flawless, seemingly untouched since it was first laid down. It was the same aura that Disney World has. Sort of a contrived perfection that never really existed. 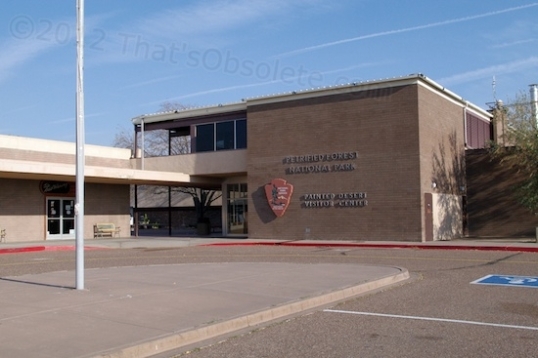 Super-cubic, with intersecting planes and big-glass, plus ultramodern signage, were very striking in their time. The contrast of planting something like this in a historic area made a statement that seemed to say, “You’re in the right place. However desolate this place might be, we got it under control”.

I parked and wandered into the Visitor Center, expecting displays or something to look at, and also hoping to see a clock to check the local time. There was a rack of brochures, and a uniformed lady behind a counter who seemed slightly confused as to why I had come in.

As it turned out, she was entirely correct. Apart from the small and equally historic Fred Harvey restaurant onsite, these were strictly administrative offices. What archives and artifacts they did have there were not open to viewing by baked out, mouth-breather yokels like me. All the tourista stuff was housing in the other end of the park. It would take most of an hour to traverse and exit the park at the other end. I had about an hour and a half before the steel gates would slide shut and the pistols be drawn. I climbed back into the mighty F-250 and headed for the entry gate, travel trailer in tow.