The almighty solar controllers finally arrived this morning at a UPS Customer Center in Blythe, California, about 23 miles away! They have the customer desk open from 9-10AM each weekday, and that’s it. It’s really a distribution center. My shipment arrived a day later than expected, but it did arrive, and now awaited my tender approach. I got up for the day, emptied the waste tanks into the Tankmin truck-mounted tank, and refilled the fresh water tank in the camper before taking off. I had plenty of time to visit the dump station in another associated camping area, so I took off for there.

Upon arriving, a sign announced that the dump station was closed. I wanted to see what the story was, so I drove the extra 0.8 miles and saw nothing except tape strung across the entrance poles. Back at the check-in shack, the guy there said that the underground tanks had filled, and that the Ranger had been notified and had likely already called a tanker truck to dump it out. It would be serviceable again before the end of the day.

I wasn’t that enthused about hauling a full Tankmin all the way to Blythe and back, mainly because it had clogged before and I wasn’t sure that sloshing it all that way wouldn’t encourage heavier sediment to settle in the hose again, and plug it. I hit what was alleged to be the cheapest commercial dump station in town and my Inner Scotsman kicked in when I saw that the charge would be $12. Hoot mon, I’d r-r-r-risk the trip, aye.

So I tripped on down to Blythe, wondering at the average indicated fuel mileage of 24 MPG. A lot of it was downhill, but still… I was so pleased when the UPS center was before me, and I walked up to the entry door, ready to get my long-awaited package. A paper sign taped to the door announced, “Closed today due to illness and shortage of staff.” Yes, closed. I staggered back to the truck and sat in it for a few moments, disbelieving. This cannot be. This was its second trip out here, and as this facility is not directly accessible by phone, there would be no way to know when the affected person(s) would feel well enough to return to work. Thursday, being Thanksgiving, was a goner for sure, but what about Friday? They were closed Saturday and Sunday. My guess was that they would chicken out until Monday, but there was no way to find out. I’d have to burn $10 worth of fuel on Friday to find out, then try Monday. This was not going to be an optimal experience, no, no.

I hit an Albertson’s grocery store in town since there is no approximation of a real grocery in Quartzsite, and noticed that the prices were predictably better, but not wonderfully so. Still, the selection was great, and you could tell that this was California – healthier choices abounded. Healthy food costs real money. I loaded up with what I guessed would hold me for three weeks. My credit card inexplicably bounced, but my backup debit card that my hometown bank had given me came through. Whatever. I loaded up the truck and headed for Quartzsite. The trip average was 18.8, still a delight. 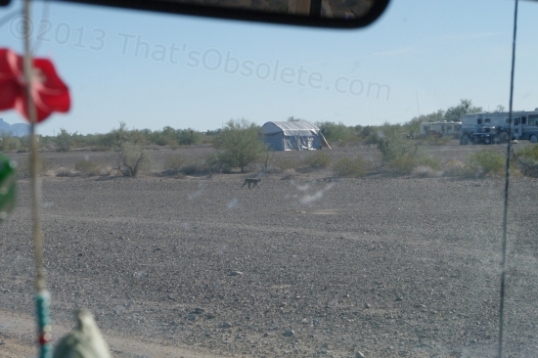 At dead center, you may just be able to make out the form of a bobcat!

By the time I unloaded and overwhelmed the poor refrigerator with lukewarm foodstuffs, it was early afternoon. I refreshed myself with Ramen noodles, which is only marginally nutritious I’m sure, and headed for the dump station again. Crossing the access road was a bobcat, of all things! Probably looking for a small dog for a late lunch. It was unperturbed by the Ford’s diesel engine, which I was surprised by. It really intimidated geese back home. 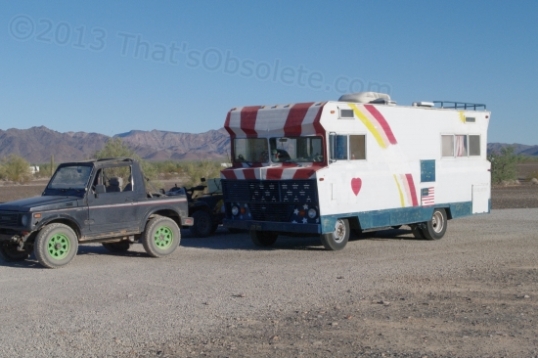 I had neglected to pack the waste hose extension before leaving home, so it took some careful positioning to get the onboard hose to reach the dump station inlet. It worked, though, and everything went swimmingly, so to speak. While I refilled the freshwater tank, an ancient motorhome pulled up to fill, too. It was painted a patriotic red, white and blue. Far out, man! They apparently also used water jugs as a supply. As a young guy called Miles filled them in the bed of his old Suzuki Samurai (see the article I wrote on this vehicle at the beginning of this blog), two women back at the motorhome filled a main onboard tank. They had started out of San Francisco and were now full-timing as well, I gathered.

While I was waiting for the freshwater tank to fill, my credit card company called with an automated message asking whether my attempts to charge at the grocery store were valid. I selected “yes” and hope to God they used that merely to acknowledge my location rather than put the cancelled charges through. We’ll see.

I then stopped at a local RV parts place to see if they had a 50-mesh water filter that I could insert into the water line going to the water pump. You may recall that I had one earlier instance of the water pump having issues with debris in the line. They were out of stock but assured me that one was probably buried in the 100 boxes of crap that they had received earlier that day. Wait.

My next quest o’ the day was to locate a fellow blogger by the name of Bob Wells. He writes about what he calls vandwelling, and yes, he lives in it full-time, all year. He’s putting on what he calls a Rubber Tramp Rendezvous from January 8th-22nd, inviting all full-time vandwellers to gather ’round and get together to share information. 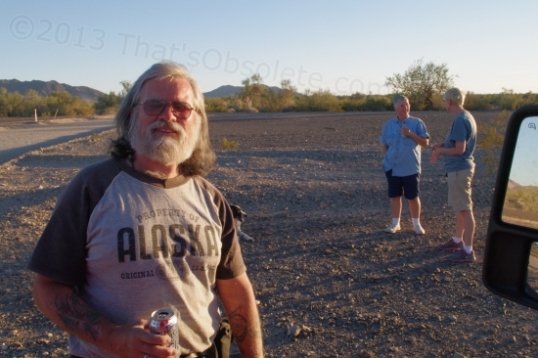 I was initially flummoxed by the directions to find him, as he was camped much further away from town than I’d assumed, but I finally located his campsite at 4:30, about a half-hour before sunset. He was about to head out on a walk, but took pains to sincerely invite me to a Thanksgiving dinner that the assembled group was having the next afternoon. It seems that the original quest for a turky breast had given way to a rather large standard-issue turkey, and they would attempt to BBQ it on a grill. I’m goin’, and for safety’s sake, I’ll bring the electronical temp-measurin’ meat fork that my devoted daughter gimme some time ago. Yes – it’s going to get some use, and perhaps save lives! Awesome!

You can just tell that these are nice people, and who knows – it may take my festering mind off getting those stinking controllers into my hands!