Heading out from Wendover along 93 Alt was the only part of the day’s trip that met expectations. After some 30 miles, it was all new territory in some way or other.

It was starting to get a little nippily at the Bonneville Salt Flats, so to avoid burning through a lot more propane, I decided to head southward. It was rain off and on all day. Turns out that the day’s climb in altitude put me up into the snowline! The rain turned to snow, and it stuck on everything but the pavement. I haven’t driven this rig on ice to this point, and there were small patches of it here and there. Now I’ve certainly driven on ice  in my lifetime, and plenty of it. In a car, it can be fun. A loaded 3/4-ton truck has great stability, but can be clumsy and hard to predict on slippery surfaces once its limit is reached. Add a heavy trailer with a weight distributing hitch, and ice is no longer your plaything. Everything went okay, though I was eager to get through Ely and get to lower elevations and higher temps. Ely’s forecast for the day was snow with a current temp of 33, then a high of 50 before it hit the low 20’s that night. Unappealing. My 8,000 BTU Mr. Heater will handle the trailer down to about 30, and that’s it. Without heat, the trailer will settle in at 5-10 degrees over whatever is going on outside, making for an interesting early morning routine.

Alone in the paved universe, I am master of all I survey.

Despite many hills, the combination of overall descent and a brisk tailwind pumped fuel mileage up to a solid 14 MPG, something I may not see again in my lifetime with this rig. I did have to climb from Wendover’s 4,200′ to Ely’s 6,400′, but from there on in, gravity overcame the brief climbs offered by the later terrain.

I never shoot the nicest views – I’m either gawking, concentrating on staying on the road, or fighting with pocket camera, and it’s gone. These are okay spots where the process worked.

My first stop was originally supposed to be Pioche, NV. At some 5,800′, it wasn’t forecast to be much warmer than Ely at 7,000′, so I valiantly pressed on toward Overton’s saving 1,300′ elevation for a total trip of almost 400 miles in a little over 7 hours. Do-able for an old guy on a mission of finding temperate weather for a trailer rated as “temperate weather only”. 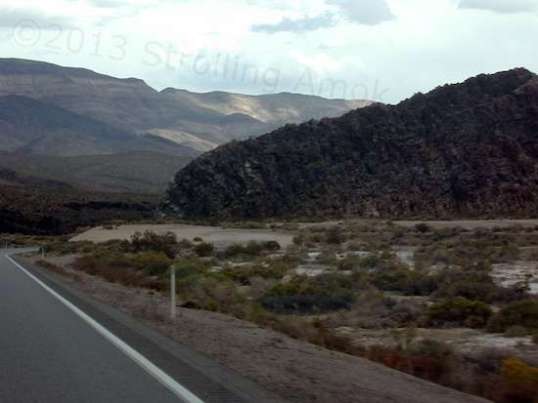 Some of the terrain gets right up near the roadway. I thought this was unusual in that it’s not a spread-out slope.

I had always pictured Nevada as a flat, featureless state with straight-line roads heading to infinity. Wrongo! Tons of hills, tons of mountains, and lots of curvy, up-and-down hijinks to keep you entertained. It’s beautiful. At times it’s gorgeous. At least along the eastern border that I wandered though, the mountainous terrain is yet again different than Utah, Colorado, New Mexico or Arizona, each of which seems to have its own vista flavor. I free roadside campsites of one type or another turned up along the way, so I may well retrace at least some my route next spring and summer along parts of 93, 6, 318, and 168 to relocate them. When you’re bookin’, this isn’t the style of rig where you can say, “Oh look! Quick, let’s pull over here!”

Rain kept coming and going the whole day, and this is why.

I wasn’t expecting much from Overton, yet another small town with a defunct mining heritage. So, it was a pleasant surprise to find a palm-lined 4-lane 25 MPH main boulevard with character. It boasted both Ace and True Value hardware stores, and plenty of active small businesses. My camping target was the Overton Wildlife Management Area just south of town, because it offered a roadside stop with multiple pull-through campsites. I expected it to be pretty busy because nearby Mead Lake was closed due to the federal shutdown. I was right about that, and considered myself lucky to find a broad strip to park on at one end, behind a big motorhome with toad (small car towed behind it). Overton’s balmy 80/55 temperatures were a whole lot nicer than 50/23, and I made do very well. It allows an 8-night free stay, and although the only available amenity there is a trash dumpster, it’s a nice spot to boondock in. I thought it odd for a wildlife area to have a couple of signs at the entrance warning that no shooting is allowed in the parking lot. Is this something necessary to mention? And does this have to do with how they manage wildlife? Actually, it does. They allow hunting here for game animals in season. The other notable difference with most other areas is that many of the desert washes have measuring sticks in them, marked in feet up to 6. They want you to know what you’re heading into when there’s water there. 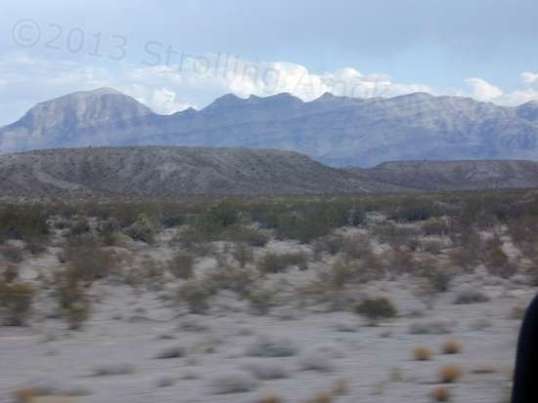 I like these mountains because of the tilt in layers going on.

With about 20 miles to go, the rain was still carrying on here and there.

The Enterprise, complete with Propulsion Module, at the wildlife management area for an overnight.

4 thoughts on “Wendover to Overton, NV”