Clod on a Hot Tin Roof

Well, the sweat continues as preparation for departure approaches. Hopefully, today is the last day of the brutal stuff. Due to the unusual heat (94-98 degrees ever since my last post) not much has been accomplished. The heat also affected my route planning, since I had to start over twice as the situation changed…or didn’t. Now, it’s just plain late departure, which also dictates elevation changes. The Pima Air Museum is out now, and a more or less straight trip to trusty old Wickenburg and beyond is in. The rest will be common to many, but new to me. But that’s not the Big News!

Yup, Mystery Science Theater 3000 is now on Netflix streaming!! Please note that I did not preface this with “…Good News”, as I’m not sure which it is even now. See, under some preposterous premise, an employee and his two wisecracking robotic creations are forced to watch what is unarguably the worst 1950s-1960s drive-in fodder ever put to film. Now, no one in their right mind would watch the first minute of any of these select B-movies, but the trick is that the hapless trio often inserts their own dialog over the movie’s soundtrack for us. Toward the conclusion of an exasperating and awful 1960 movie last night, some of the main characters were happily approaching camera on a California beach when the lead one was dubbed over to say, “Be careful where ya step up here, there’s a lotta loose ends blowing around!” Watching this series is both punishing as well as great humor. The humor acts as at least a partial antidote to the drek it covers over and, if nothing else, will leave you muttering to yourself, “How the hell did they ever get funding for this?”

The secondary announcement is that things are slowly falling into place. The world now looks more “right” from where I sit. 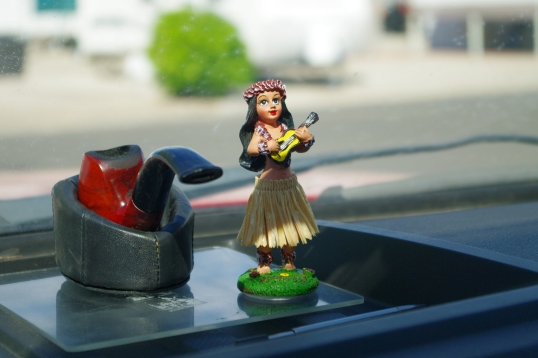 See, in my book, you can dude up all you want with solar, big off-road tires, fancy living quarters, Bullet food smasher, down quilts, pricey hiking footwear, private shower, fancy off-road trailer with grill, you name it. But it’s all just fun & games until you stick a wobbling hula girl to your dashboard to let the world know, “Hey, this here is serious.”